In honor of the 100th anniversary of the formation of the Taos Society of Artists I am writing a few articles pertaining to the Taos Art Colony, here's one on the Fechin/Taos Art Museum: 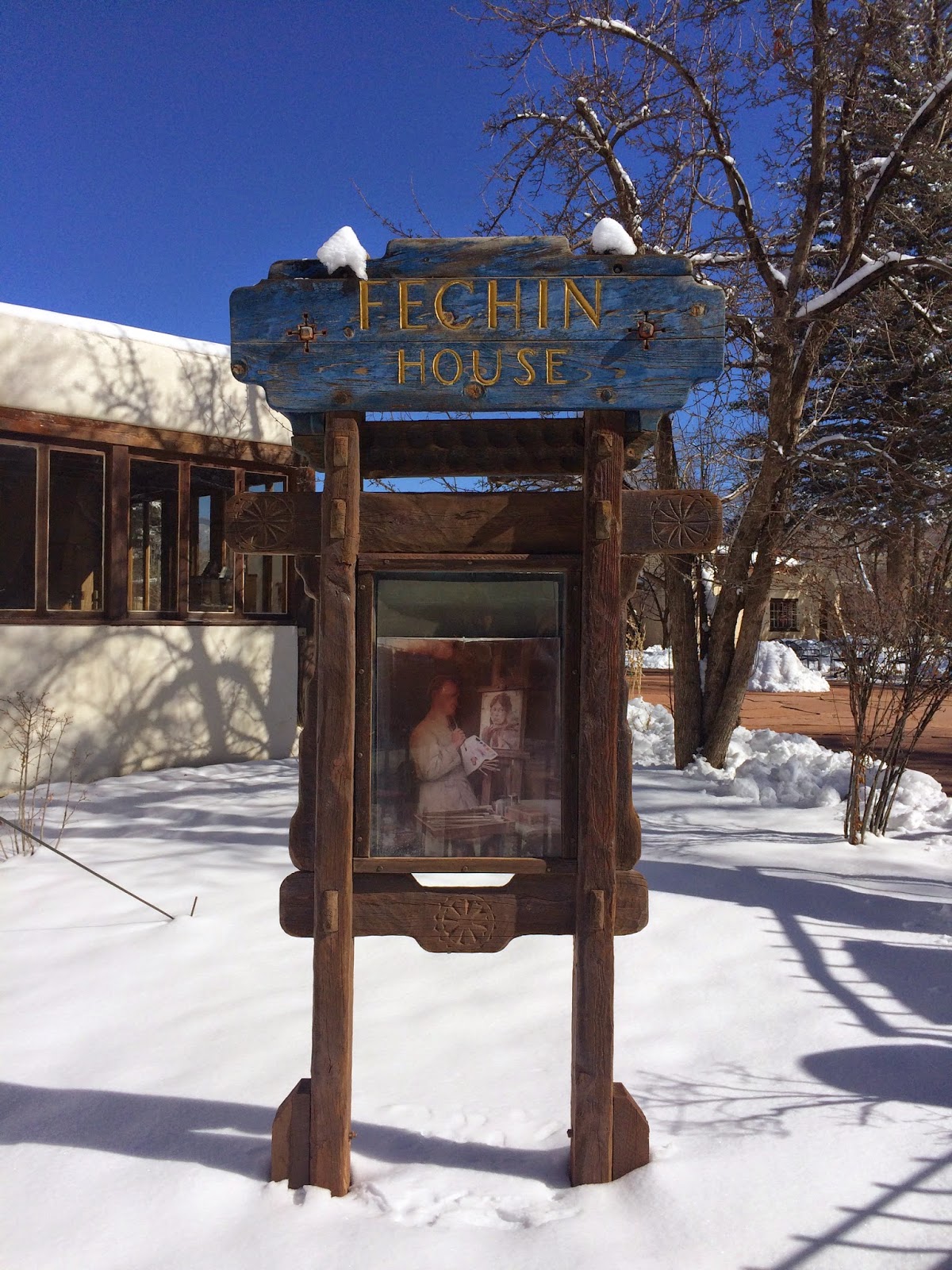 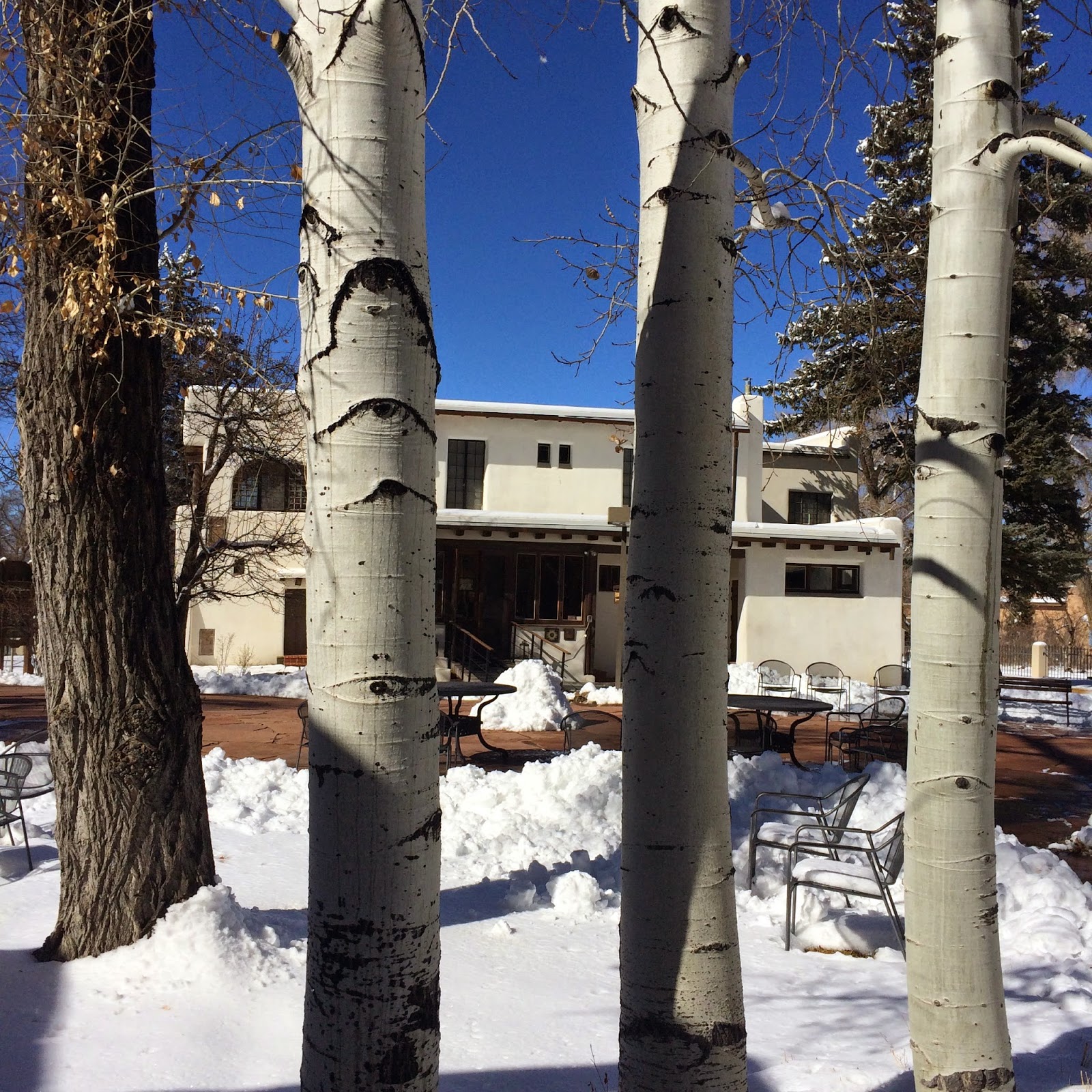 Fechin House through the Aspen Trees 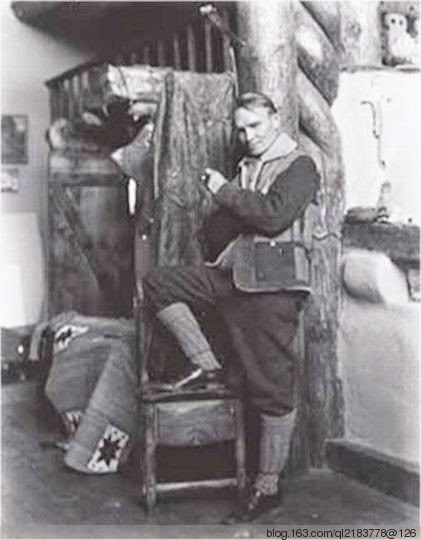 Nicolai Fechin in the Taos Studio
Fechin purchased 7 acres of land and a small adobe home next to the estate of Mabel Dodge Luhan. There he began to build and carve out a home and studio to suit his own needs in 1928. Lumber was purchased at the nearby Randall Sawmill (the Randall Lumber & Hardware business still operates in Taos today) and ironwork was created with the assistance of the Bill Hinde Blacksmith shop (the same Blacksmith shop where the Broken Wagon Wheel was repaired). Fechin worked with a small crew of local craftspeople. On cloudy days or at the end of the day he would switch to carving the elements that make up this magnificent house. This masterwork of carpentry has been inspiring woodcarvers from near and far since it was begun. In 1979 the house was listed on the National Register of Historic Places. When Alexandra asked for a divorce Nicolai moved to NYC for a short time with Eya, later deeding the house to his former wife. He moved on to Palm Springs, Hollywood and then to Santa Monica, California becoming a much beloved artist and teacher to a new generation. 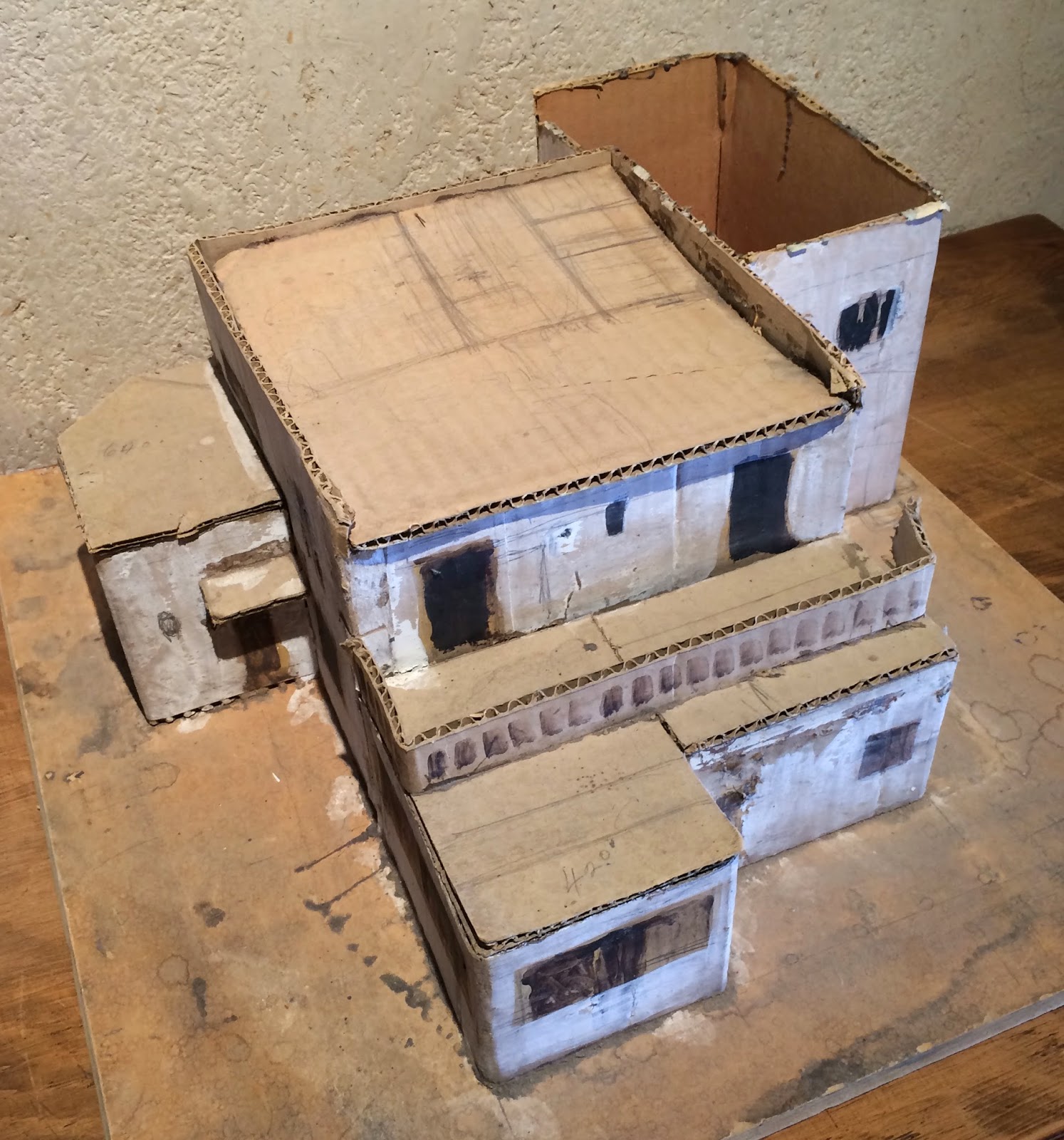 Cardboard Model of the house as Fechin worked on it.


“Fine painting is simply a matter of putting the right colors in the right places on canvas.” Nicolai Fechin


Fechin is known mostly for his portrait drawings and paintings. He also created narrative and historical paintings. The texture of his paint, a flash of brilliant eye dazzling color, his balance, the manipulation of matte to gloss is what artists respond to. His canvas was primed sometimes with rabbit skin glue, then gessoed with a mixture of white casein ground (casein is a mixture of a milk substance, in this instance derived from cottage cheese, mixed with a pigment), this preparation could effectively absorb the mediums used in oil paints. He worked with brushes, palette knives and his fingers, at one point developing blood poisoning from the various paint pigments. A Fechin drawing has a textural quality extremely different from every other artist, thus highly recognizable as a “Fechin”. 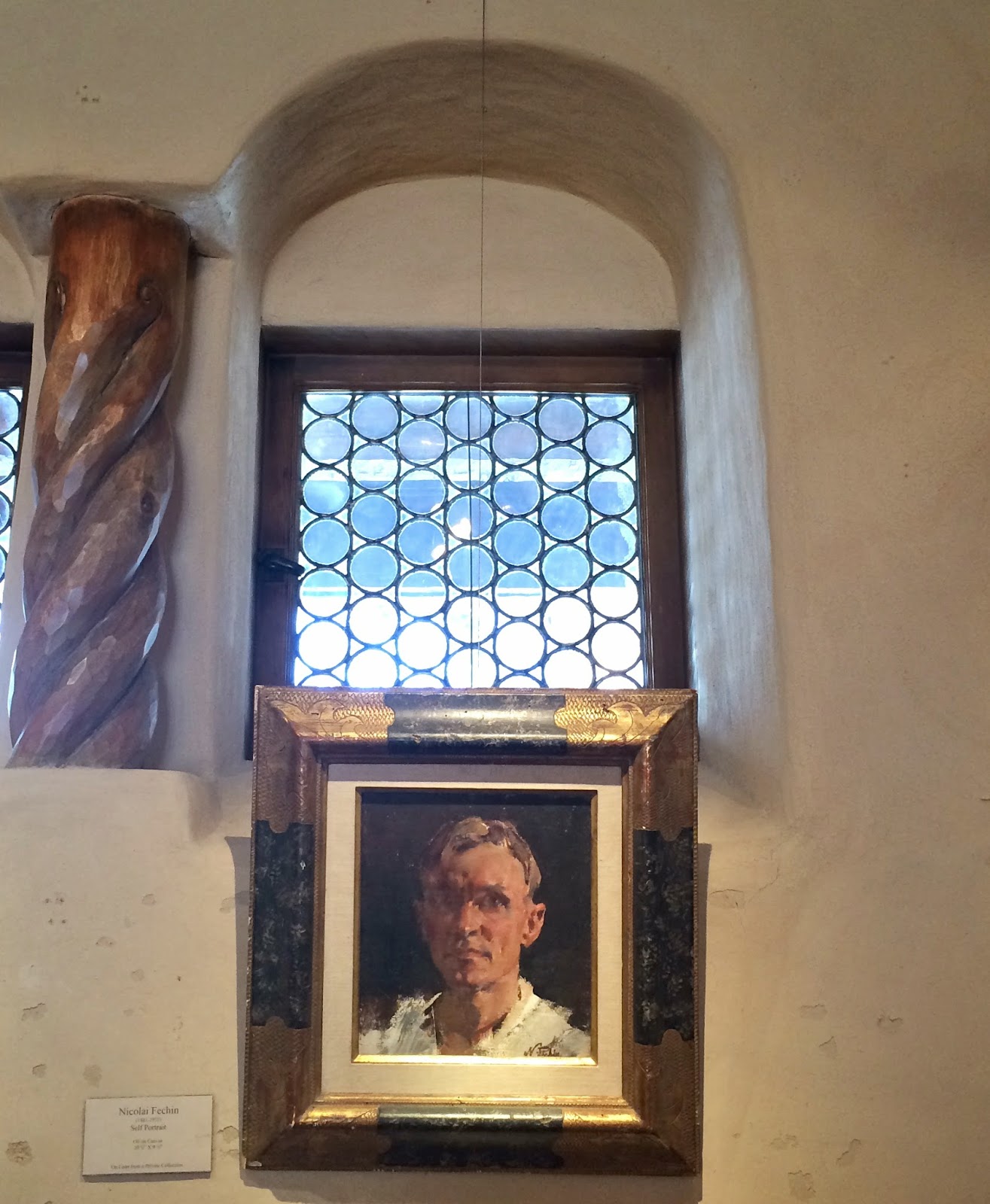 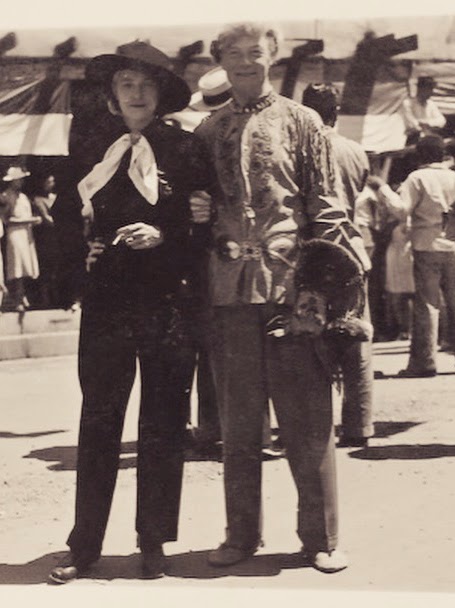 
While in Taos he seems to have kept to his work, even when he’d take a break and go fishing he went on his own. His friends here were Mr. & Mrs. John Young- Hunter, along with Bill & Rebecca Salsbury James.
Fechin and fellow Russian artist Leon Gaspard who came to Taos in 1918, and built his own home here, were not known to be friendly towards one another. Both men had rather feisty reputations among the many others in the small art colony. It’s rather odd that 2 Russian artists settled in Taos, New Mexico at this time period. From what I read about this coincidence there are similarities to their homeland in Taos with the landscape and indigenous people, I believe this to be a bit of a stretch. Artists are a competitive group, in a small art colony where each is trying to stand out, to this day it is a constant struggle. Imagine someone visiting Fechin’s studio, seeing a painting they might want to purchase, then telling him they would first visit Gaspard’s studio before deciding. Gaspard may then sell them a painting for a bit less and vice versa, it would be cutthroat (it still is). 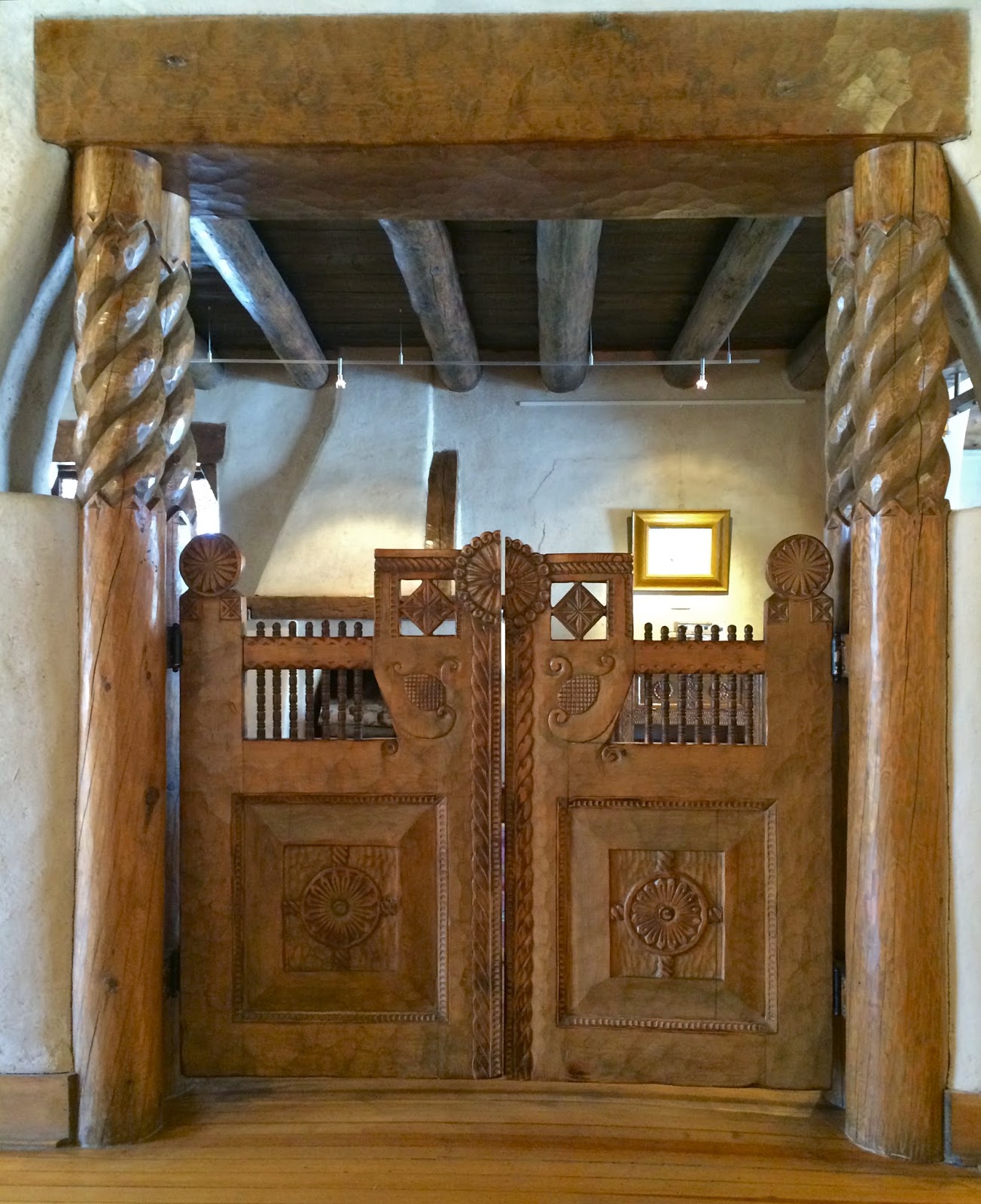 Carved Swinging Doors to the Great Room of the Fechin House 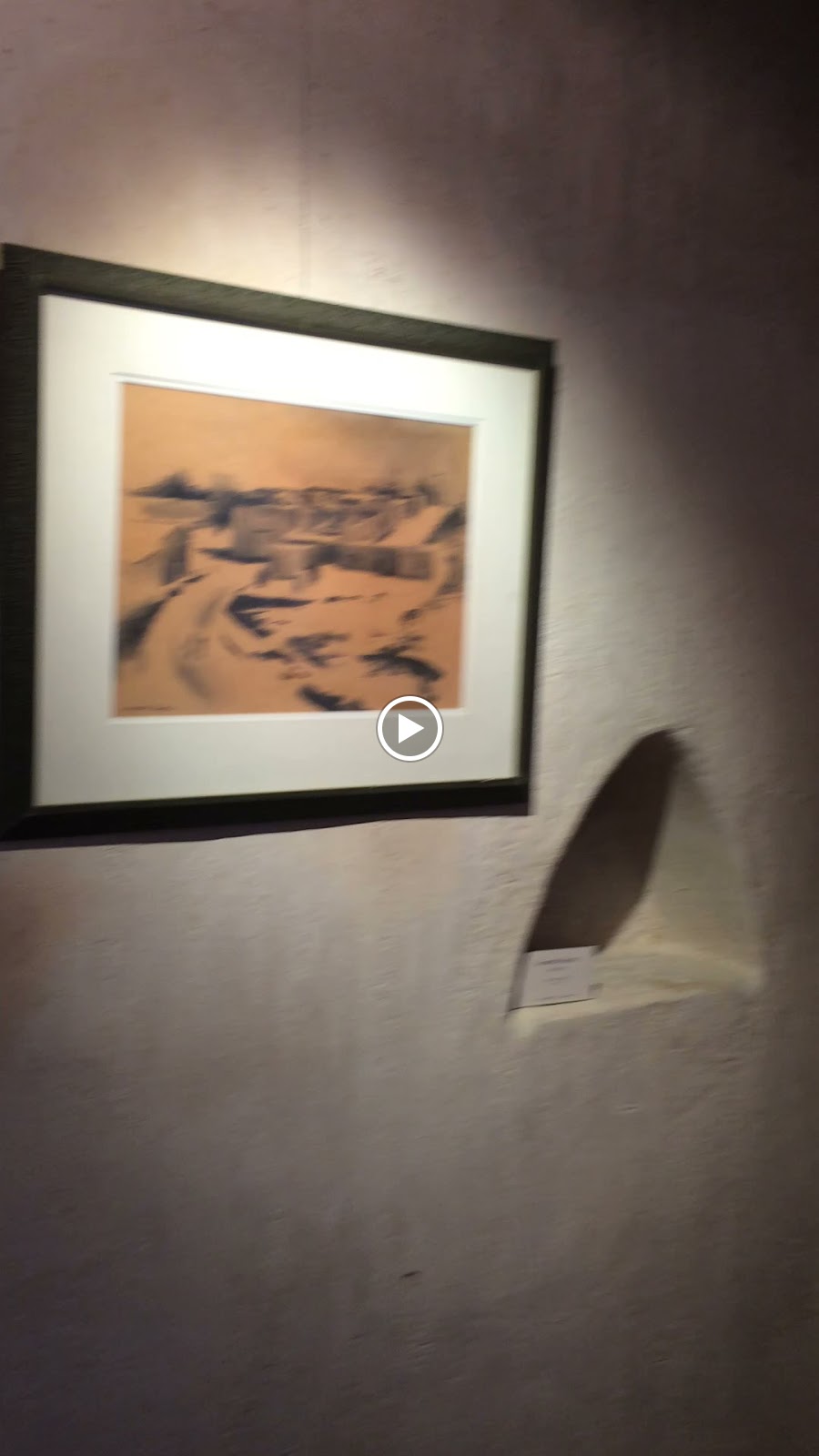 Short video of the Taos Society of Artists room.


Today the Taos Art Museum at the Fechin House is a proud example of one of the very best Historic Home Museums here in Taos, NM. The collections include the paintings of Nicolai Fechin and examples of the Taos Society of Artists and other Taos Art Colony artists.
A few of my favorite paintings in the collection are Walter Ufer’s ‘Kit Carson House’, ‘Indian Man and White Horse’ by Bert Phillips and ‘Tulips’ by Andrew Dasburg, all beautiful examples of early Taos art. 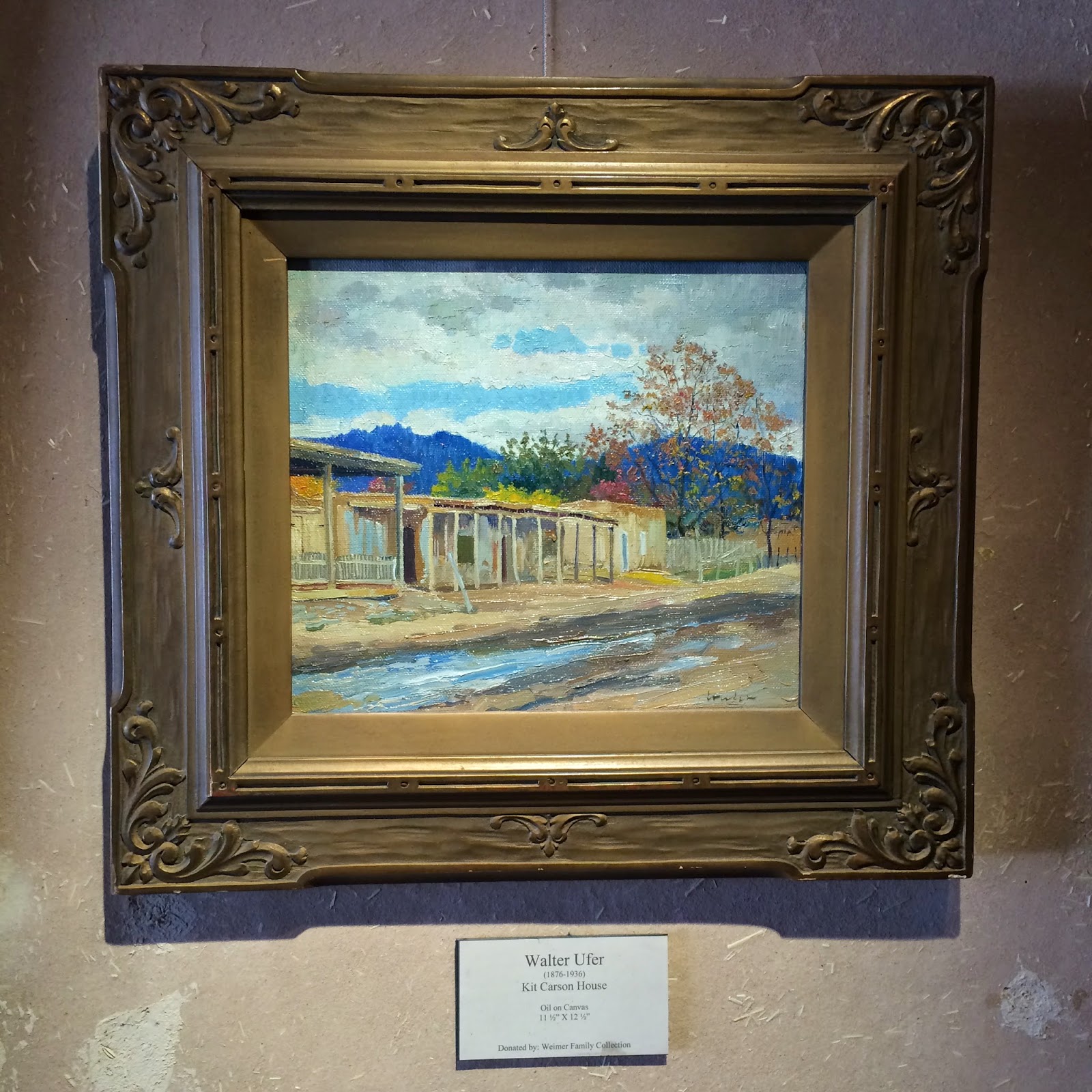 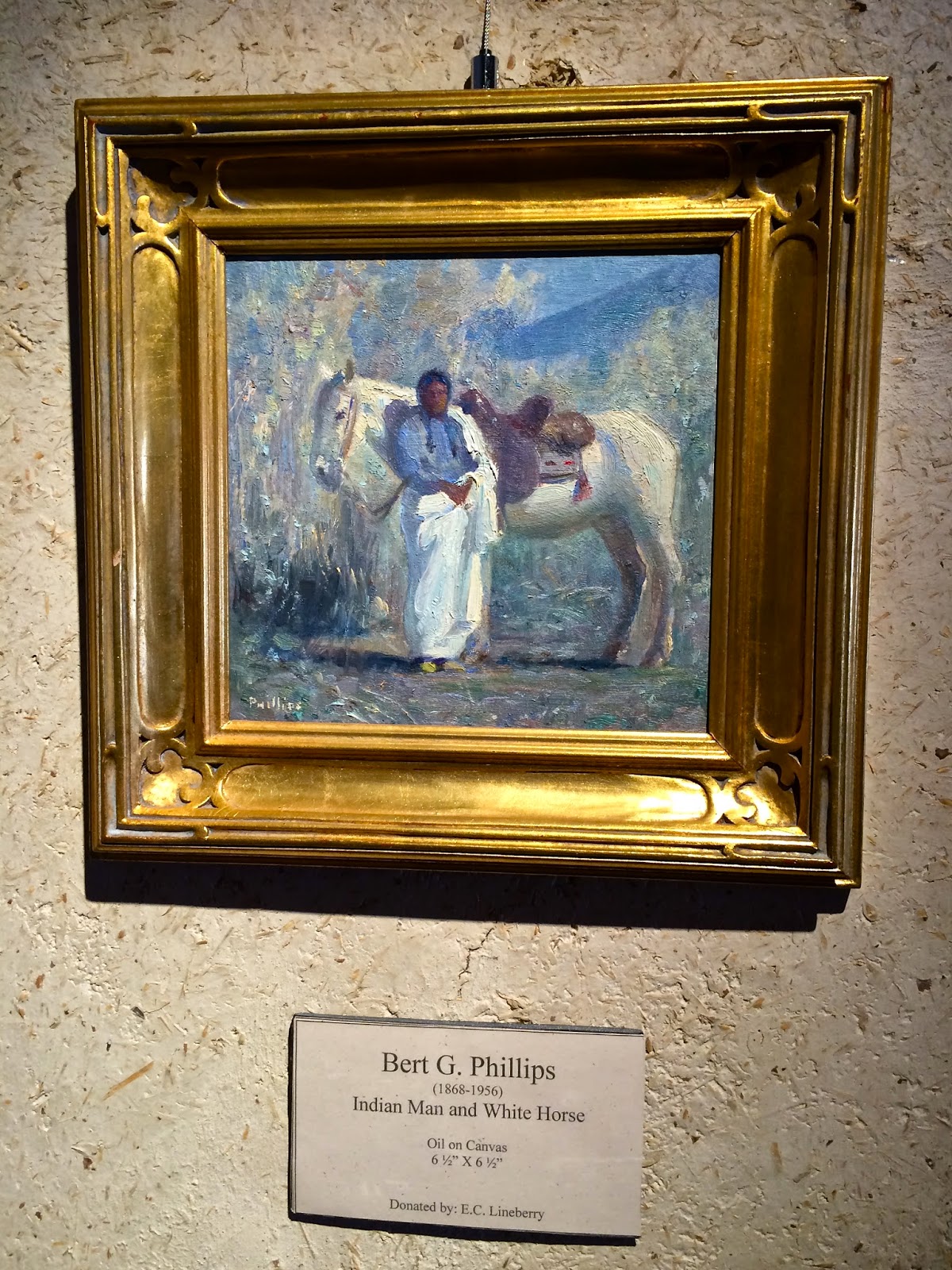 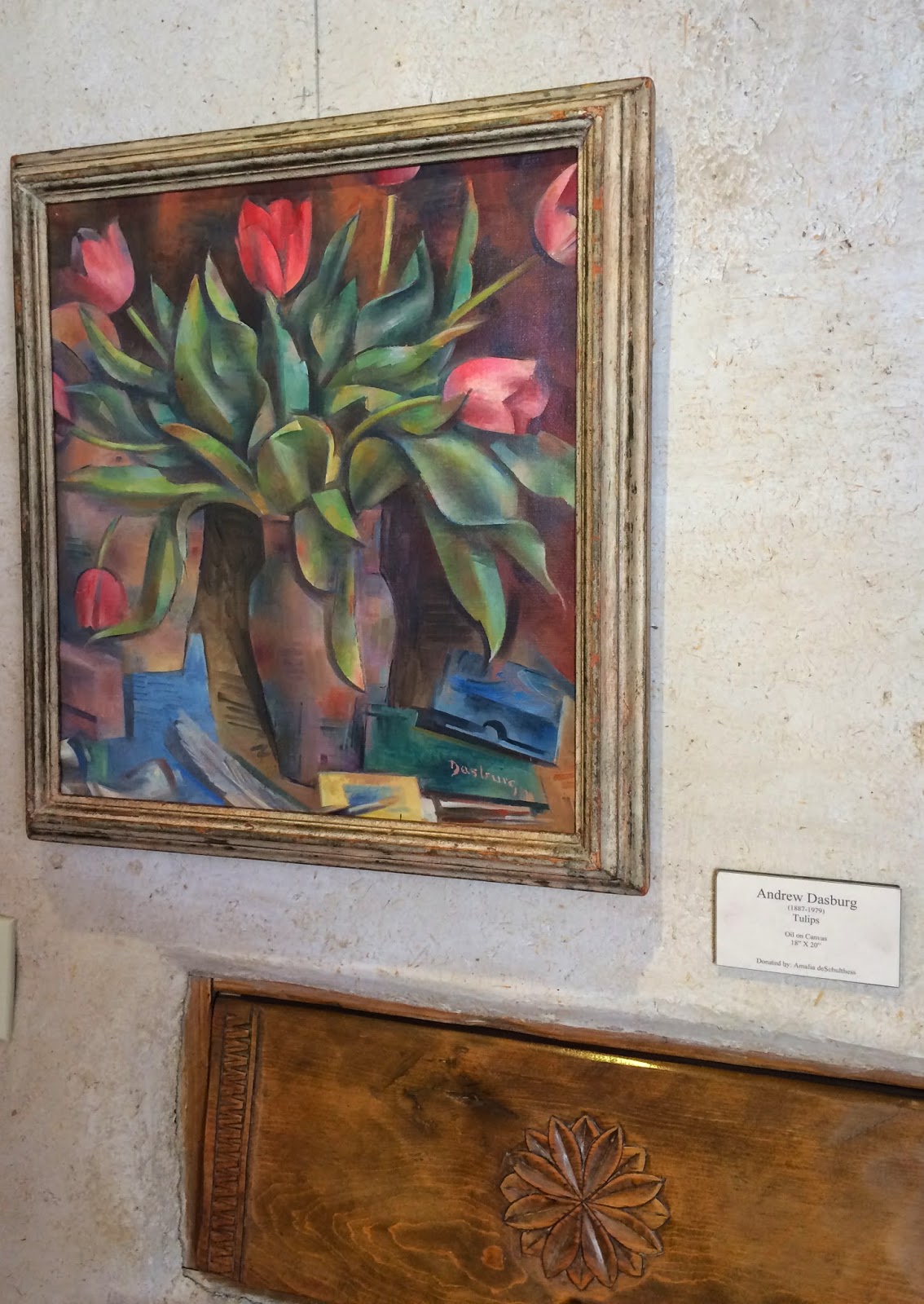 Andrew Dasburg "Tulips"
While viewing the collections please be sure to also take a look at the interior itself, furniture, beams, doorways and lintels are all hand carved with various motifs, a bit of Russian style meets Southwest style. The woodwork today is maintained with a bit of S.C. Johnson’s Paste Wax from time to time, keeping the luster of the wood rejuvenated in the dry Taos air. 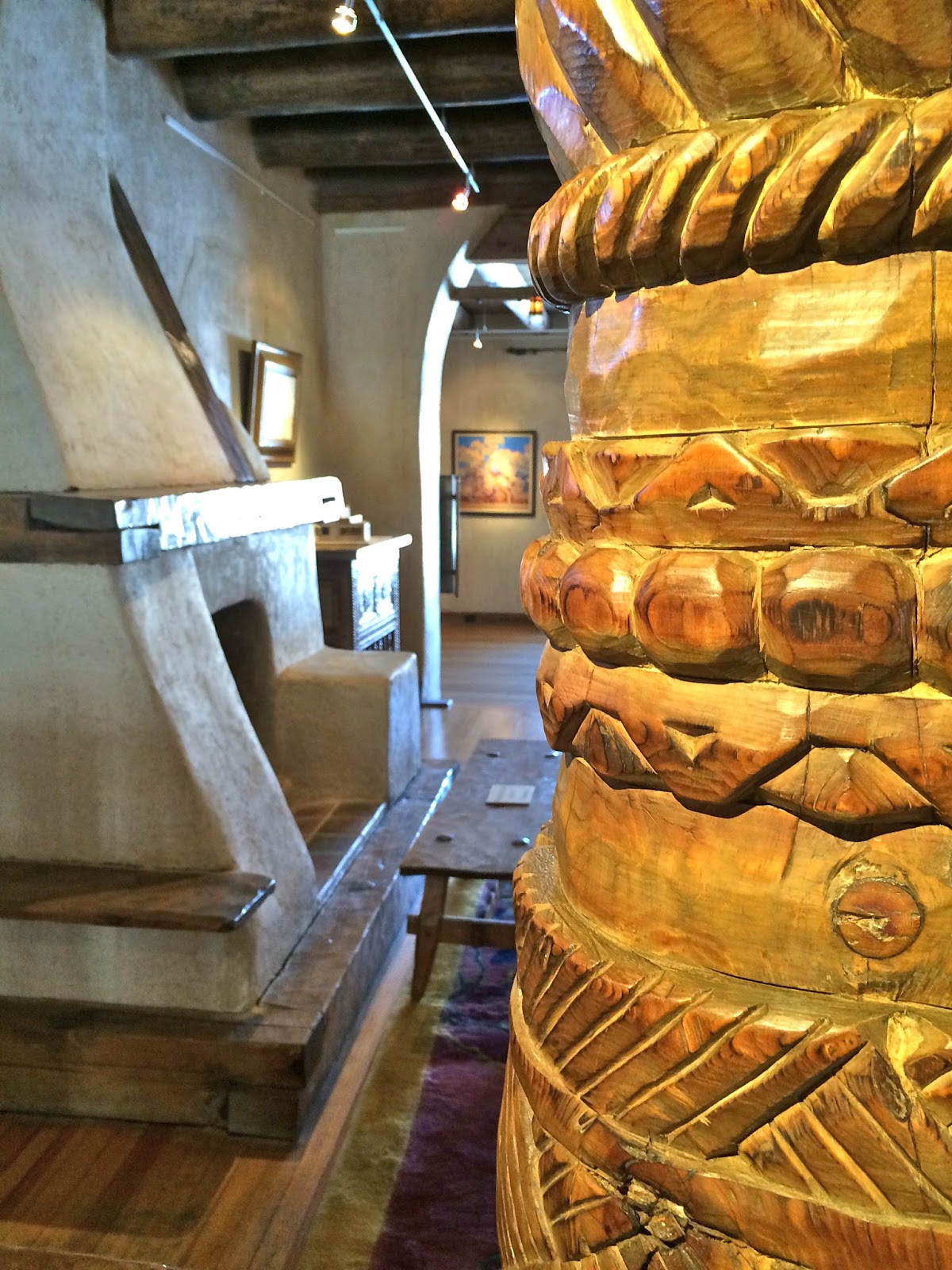 Carved Post and Fireplace in the Great Room
The building is open to 2 floor levels, there is currently no wheel chair access to the second floor, the first floor I am told by staff is a bit tricky to navigate (stepped levels) for those using wheelchairs, they will do their best to accommodate. 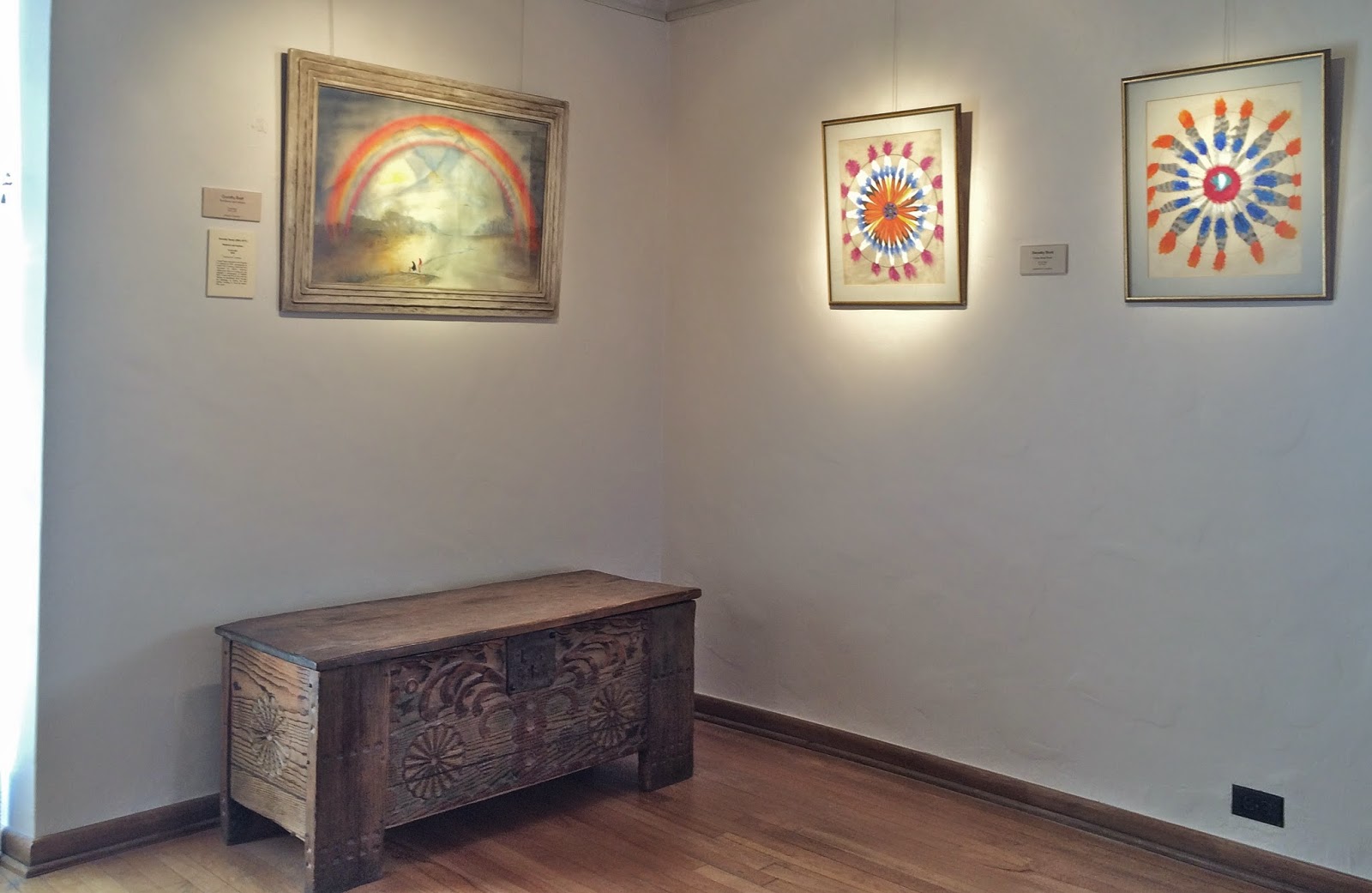 Three Dorothy Brett Paintings upstairs
Exhibitions change from time to time, mostly they are held on the second level. It’s best to check the T.A.M. website to see exactly what is on display at any given time, www.taosartmuseum.org 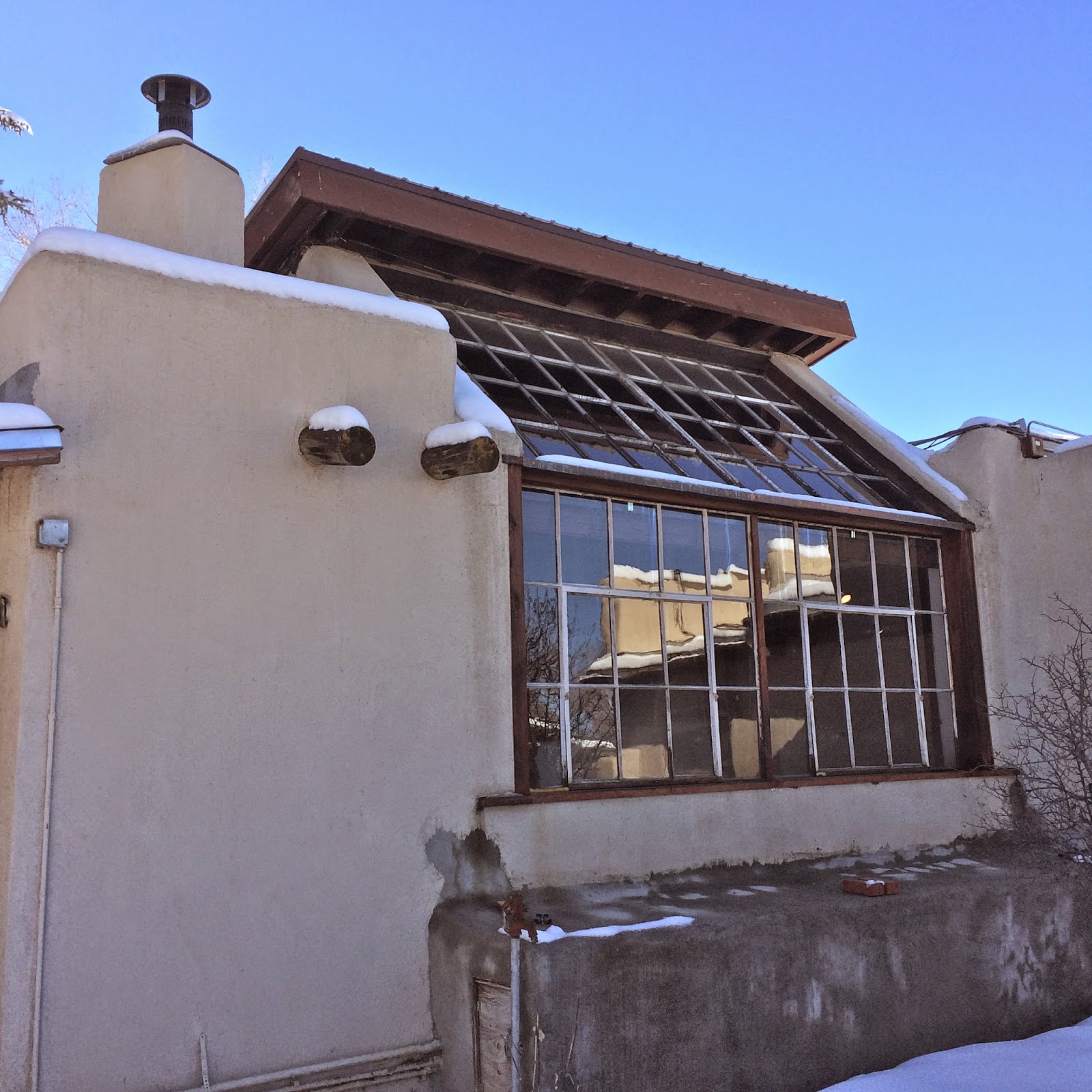 Fechin Studio window with Northern Light
The Fechin Studio is a separate building the front room of which today houses the museum gift shop. Saturday afternoons throughout the year hands-on workshops and demonstrations are held in the large studio itself. Both of these rooms are not to be missed, staff is welcoming and want you to enjoy the entire experience of this treasured museum. 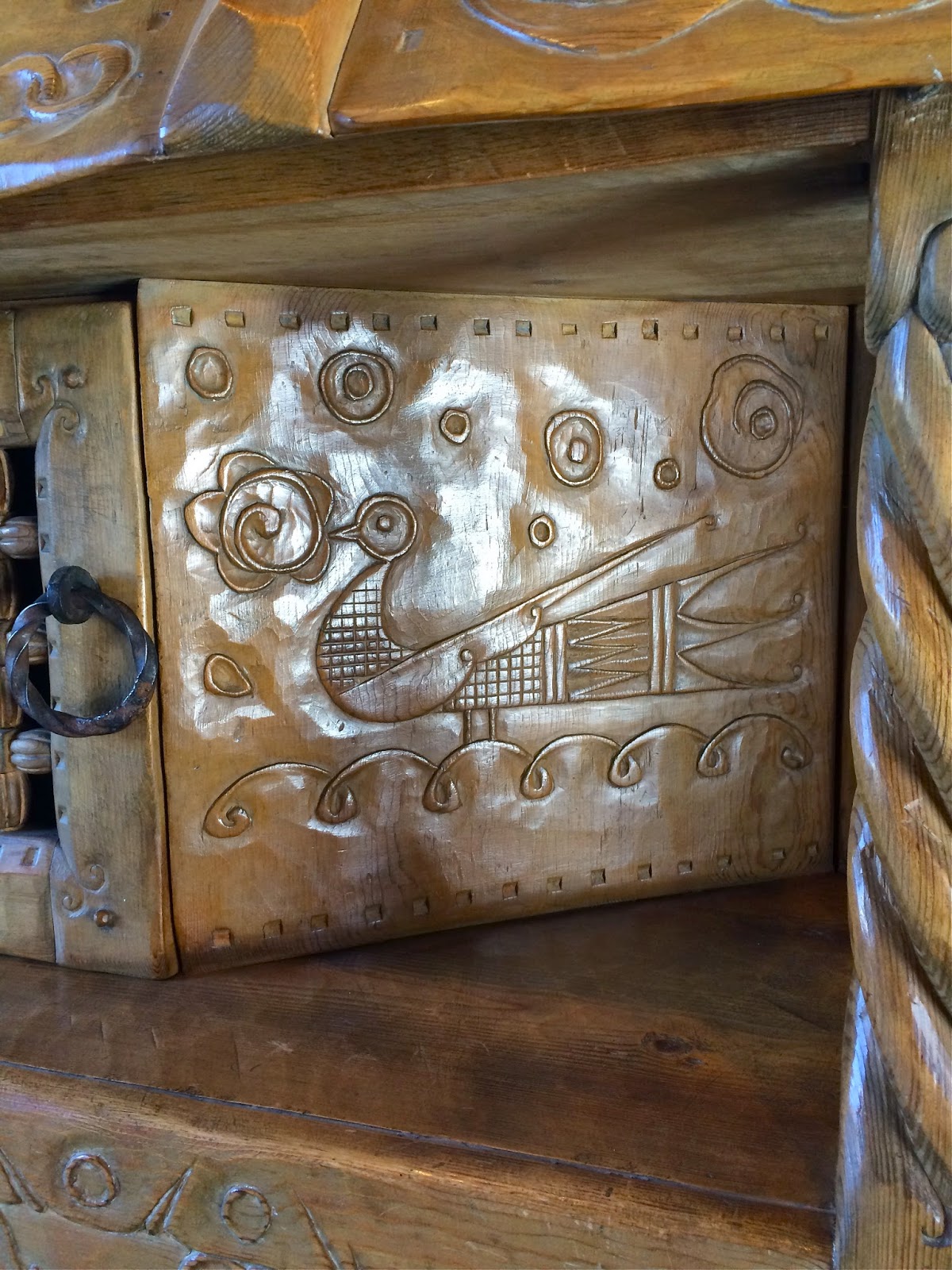 
Recently I asked one of the staff members to tell me if she had any particular favorite work of art in the collection, her response; “Where do I begin, there are so many beautiful treasures here.” 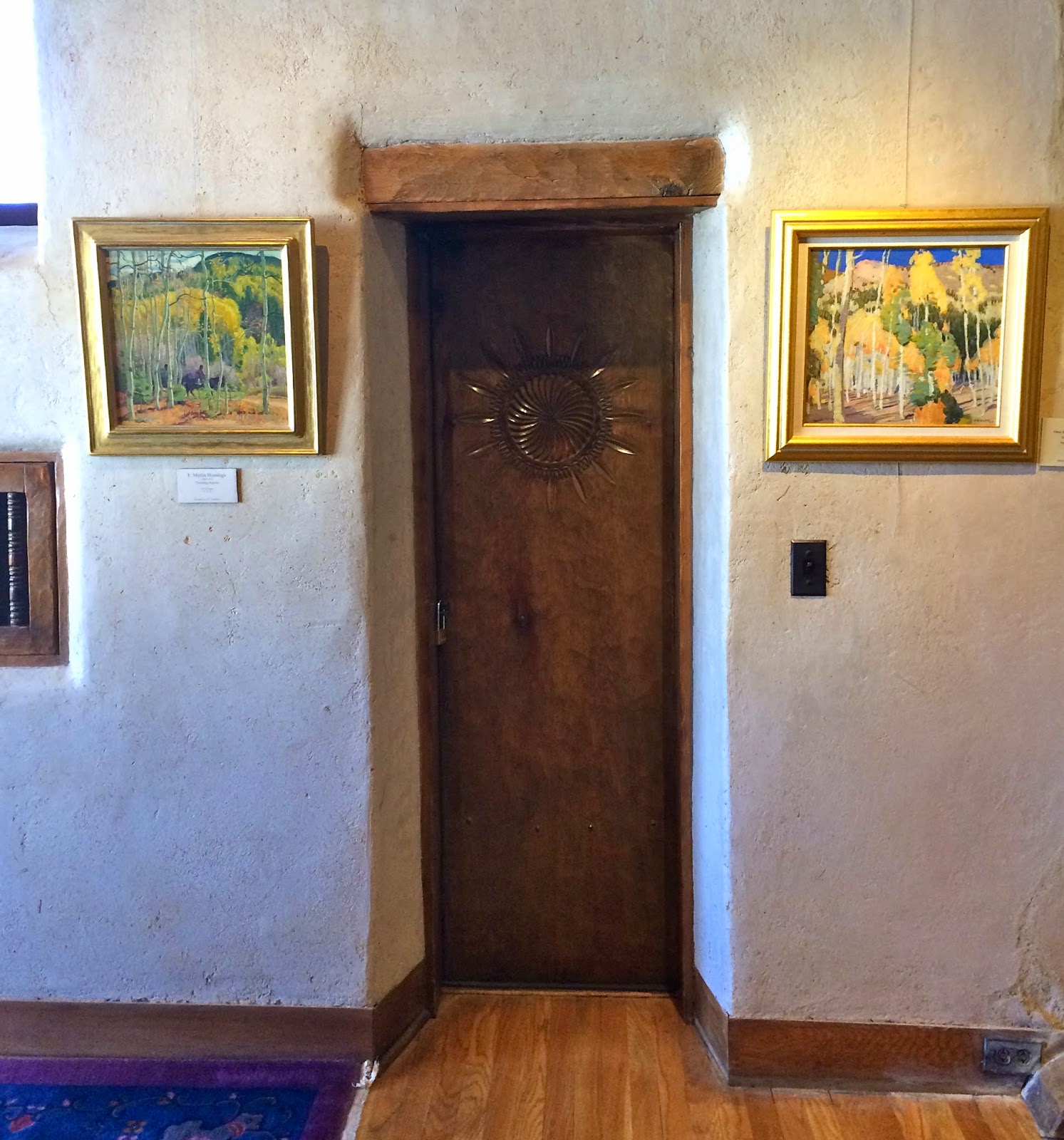 Painting to the left by E. Martin Hennings on the right by Herbert Buck Dunton
A bit of background to the Museum:
The Taos Art Museum at Fechin House originally formed as the Van Vechten/Lineberry Taos Art Museum in 1994 to honor the wife of Edwin C. Lineberry and their collections. His wife Duane Van Vechten passed away in 1977, she was an artist who studied with Taos artist Emil Bisttram, yet she shied away from ever selling her artwork. They named their home “El Rancho de la Mariposa” which was decorated with a butterfly motif throughout. Edwin & Duane also built the Kachina Lodge which she helped design Zuni Knifewing and Kachina motifs to enhance its appearance. 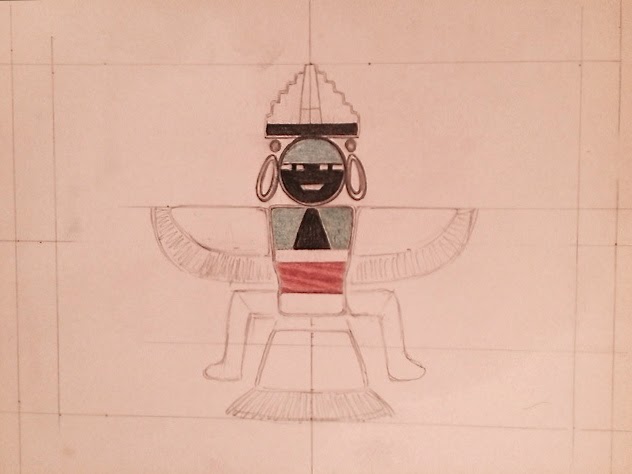 Zuni Knifewing Architectural Drawing for Kachina Lodge by Duane Van Vechten, available exclusively at Two Graces Plaza Gallery
The Van Vechten/Lineberry Museum eventually closed and merged with the Fechin Institute in 2003. Much of the original collection was sold at auction. Recently the V/L buildings were opened to an Estate Sale where much of the remaining household items and collectibles were sold off. 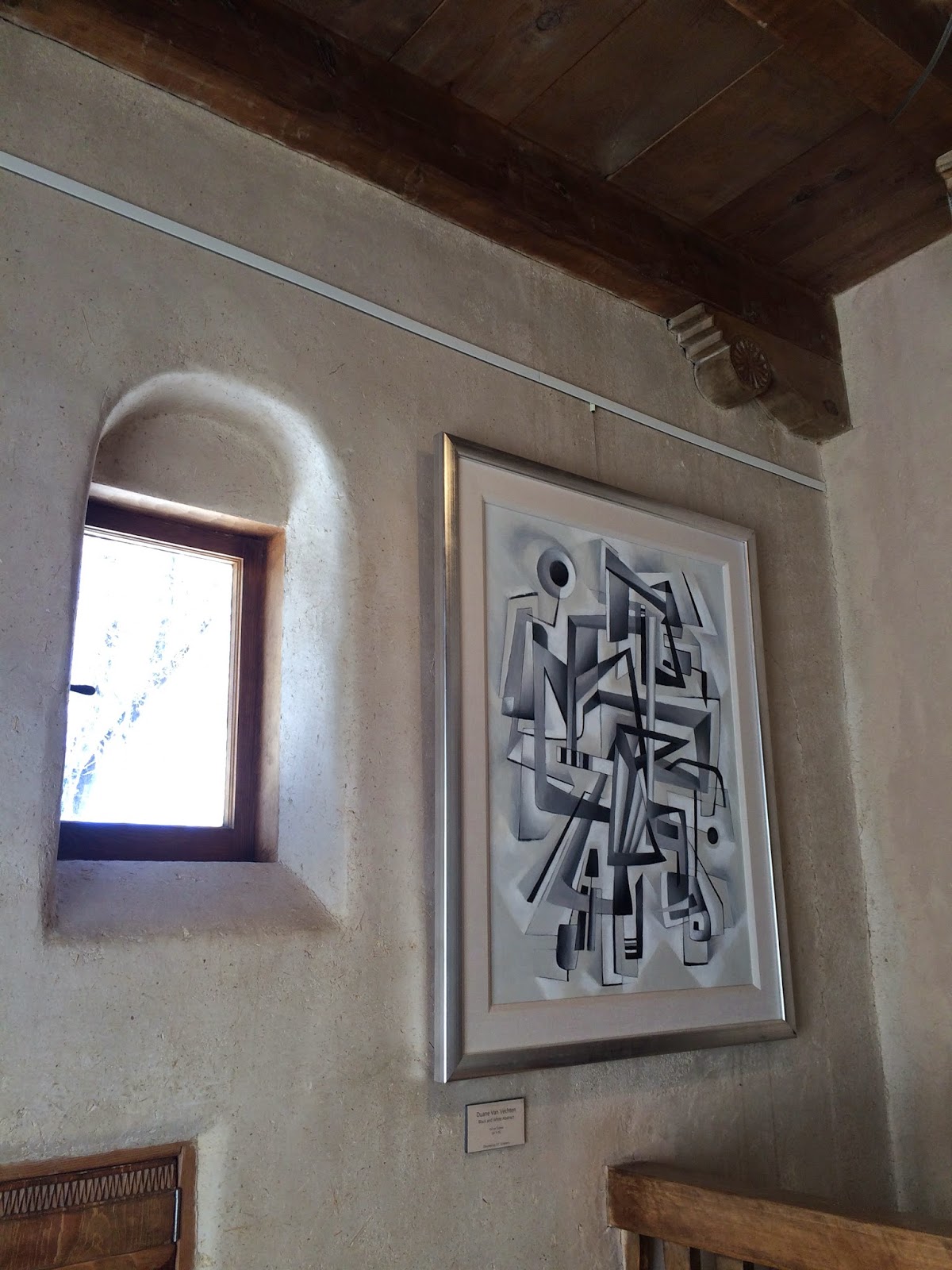 Abstract Painting by Mrs. Duane Van Vechten at Taos Art Museum
The Van Vechten home (which is currently closed to the public) is located at 501 and the Fechin at 227 Paseo del Pueblo Norte, (approximately 3 blocks form each other).
The Fechin Institute (basically a historic home opened to the public) was founded by Eya Fechin in 1981, it had begun to fall into disrepair before her death in 2002. Eya’s son & daughter-in-law sold the house to the Taos Art Museum foundation. 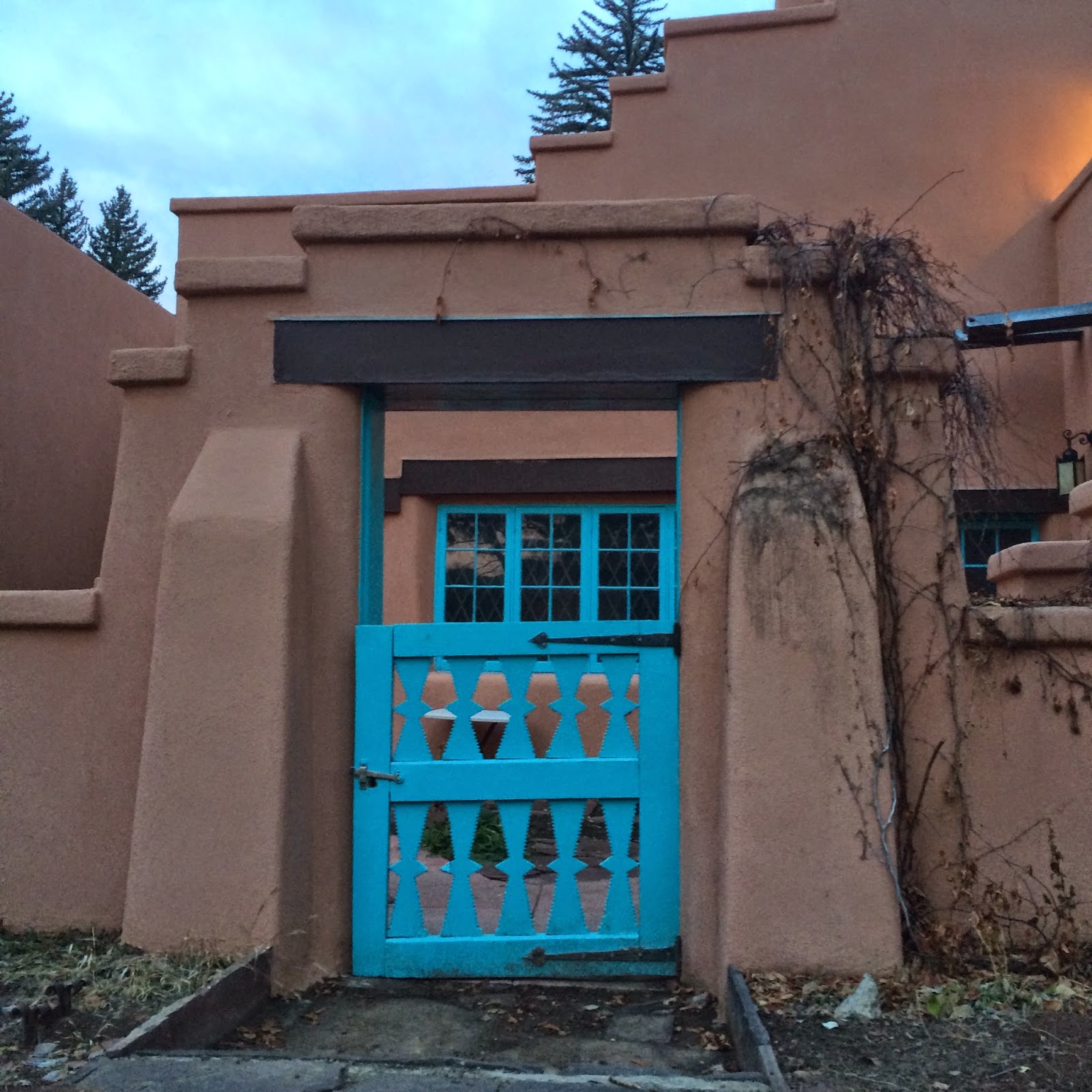 The Worldmark Hotel, a Wyndham Resort is built in the style of the Fechin House, it’s located directly behind the Museum. www.worldmarktheclub.com/resorts/ta/ the telephone is 575-751-3275
If you were to drive straight back through the fence and wall at the back of the parking area you would be driving onto the Mable Dodge Luhan B&B property. 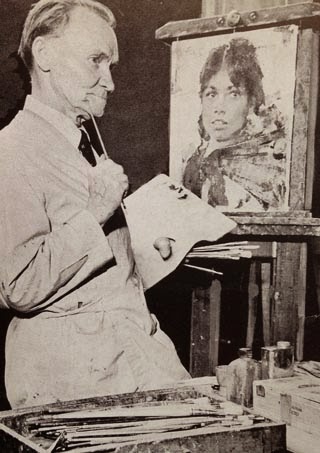 Fechin at his easel Painting


The Taos Art Museum at Fechin House is a true jewel in the necklace of museums and historic homes we are so very fortunate to have and enjoy here in Taos. Their telephone number is 575-758-2690