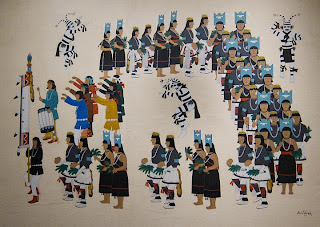 Dorothy Dunn School style painting of Santo Domingo Corn Dance Ceremony (please note: the clowns are spotted and not striped as in this depiction).

August 4 is the traditional holiday for Saint Dominic, Patron Saint to Astronomers and Hopeful Mothers, also the namesake of Santo Domingo Pueblo now known as Kewa Pueblo. Located 25 miles south of Santa Fe from Taos its normally about a 2 hour drive. With feast day traffic and Brian M. as my guide, we took the back roads through nearby Cochiti Pueblo. On the road we passed corn and pepper fields, along with a whole lot of roadside Bee Weed, used for painting the black designs onto Pueblo Pottery. Cochiti Lake, the Rio Grande and the Santa Fe River all supply water to the people of this region, this is truly a wealth of water. With ominous Thunderheads gathering overhead this morning we were not to see any moisture from the sky. Years ago I foolishly asked at Zuni Pueblo if the dance would still take place as it began to rain. The answer to my question was “We dance so that it will rain”. Parking where we entered the village was plentiful within 2 blocks walking we were suddenly in the midst of the Corn Dance. The Plaza was packed with dancers; Men, Women, Children all in ceremonial dress, along with the Koshare type clowns of the village who were all over the place. I’d estimate over 300 ceremonial dancers! 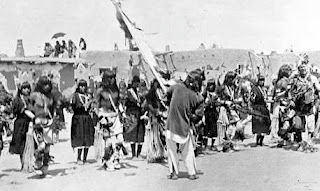 Vintage photograph of the dance ceremony 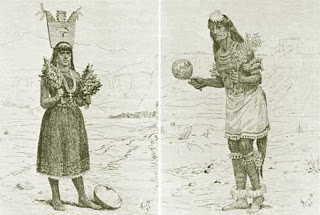 The men wore crisp white kilts, a fox skin attached to the back through a woven belt, red clay painted bodies, white moccasins, a bundle of parrot feathers tied at the top of their hair carrying black gourd rattles. The women with long black hair some wearing traditional cloud Tabletas on their heads painted turquoise, (nowadays made of foam core, yet still strikingly beautiful), black woven dresses and either red or black moccasins. Each dancer carrying bows of evergreen. I believe the dancers outnumbered the viewers, there were SO MANY of them. 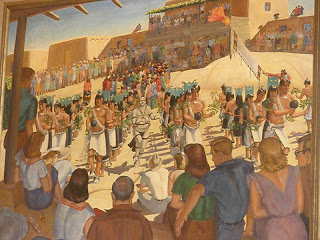 1947 painting by Ted Schuyler which he produced from memory! 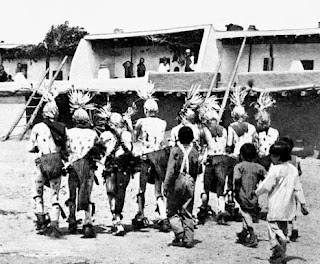 Everywhere you looked there were the clowns, riding on golf carts, walking among the visitors, even shopping amongst the many vendors. The Hopi Clown equivalent would be a cross between Tsutskutu and Kaisale. My description is of men with white clay painted onto their bodies which are embellished with randomly painted large black dots, wearing loose black kilts, with turtle shell rattles attached, the hair is painted with clay and formed up onto the top of their heads as a spike then tied with corn husks sticking straight up into the air.

The black dots on some were allowed to drip to form a polliwog/tadpole design, a symbol of water and life.

As a child I would often play at local ponds scooping up frog eggs to watch them develop into squiggling tadpoles with short black tails, then forearms developed and later back legs, life developing right before my eyes.

Right through my shoes my feet burned standing in the soft sand, a Clown came up to me and handed me a gift of a cold orange soda, I accepted gratefully. 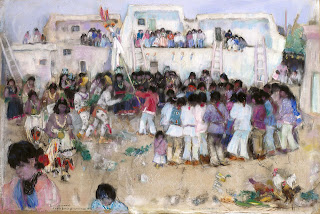 Set up on one end of the Plaza was a tented booth where visitors were allowed to view the large plaster statue of St. Dominic, and to then help themselves to food prepared by tribal members, a gracious offering to all. This so reminded me of the Little Italy parades of Patron Saints through the streets of Boston and New York City during the Summer months, so heartwarming. 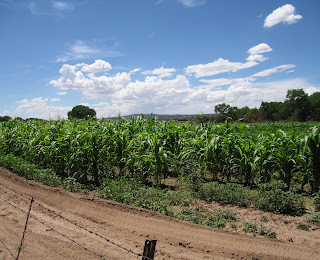 A Pueblo Corn Field on a very hot summer day.

All of the people at Santo Domingo were exceptionally welcoming, friendly and most of all glad we visitors were there.

This is the second time I’ve been to Santo Domingo Pueblo, the first time a few years ago, my family & I were invited by the Governor’s Office to the closed ceremony of the Rooster Pull, which I am not to speak or write about.

As we drove away from Santo Domingo a Roadrunner crossed our path and soon a Dust Devil skittered past us as well, New Mexico working it's magic once again. 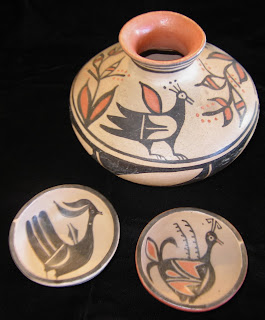 A few examples of Santo Domingo pottery currently available at Two Graces Plaza Gallery. Small Chile bowls with bird motifs and a large Water Olla. There is currently a revival of this pottery begun by the contemporary potter Robert Tenorio, who has been teaching his people to make this sort of beautiful pottery again. These 3 examples are by his students.

On to Santa Fe to take a second look at the “Thunderbird Jewelry of Santo Domingo Pueblo” exhibit currently at the Wheelwright Museum until April 2012.

This exhibit concentrates on the Depression Era Necklaces, also known as Tab Necklaces, or Thunderbird Necklaces. 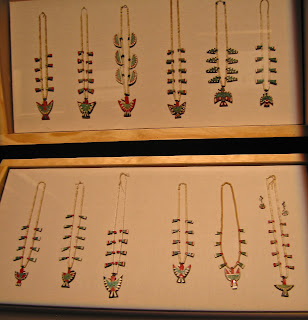 Wheelwright Museum Exhibit
According to legend this jewelry comes about in the late 20’s early 30’s during the great depression when a train wreck takes place near the Pueblo. The box-cars were full of early plastics such as records, car batteries, cafeteria trays, and toothbrushes, which were left behind in the dust. The people gathered this material and began using it, making this some of the first ‘recycled’ craftswork. I’m told the white parts are from toothbrushes, red cafeteria trays, black car batteries or records, along with left over turquoise bits and pieces. The beadwork is made of local calcite, although the ladies have told me teasingly they are made of Goat Penis bone, (newer necklaces use heishi shell or glass beads). 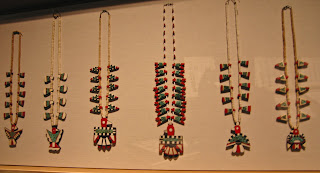 They are strung on cotton string and should be re-strung by someone competent to do so.

That I know of there is one repair person in Santa Fe who specializes in fixing these if yours is damaged. 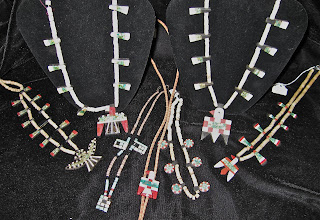 The now adult children of the people that made these have told me they participated in the work involved by putting the plastics into the oven for the plastic to soften, then cut out the patterns with sharp tools. Mom & Dad would then ‘inlay’ the parts and string them together. Road trips would bring them to Trading Posts and other Pueblos all over the southwest, where this jewelry was sold or traded. There is a misnomer that because much of the jewelry was purchased by visitors at Zuni Pueblo, people assumed it was Zuni made, this is not true.

In the early 70’s when Dennis Hopper was living in Taos he wore a tab necklace with great aplomb! 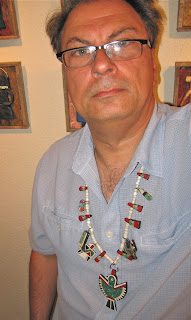 I own a necklace, which is made up of parts that I have purchased over the years, and love wearing it. Ladies from Santo Domingo have a Love/Hate relationship with these items telling me they hated the fact that Mom & Dad ‘made’ them do the hard work of cutting out the pieces OR how memories of a different day & age come flooding back to them when they see these wonderful historically rich pieces of jewelry.

Now with this extremely beautiful exhibit of these necklaces at the Wheelwright Museum, the people of Santo Domingo (and the owners of them) can take pride in a part of this history of the southwest. A book is expected to be released by the end of Summer based on this exhibit. Once the book is out I’d expect this jewelry to become much more treasured and to see prices triple in shops across the southwest region.
Please join us on Facebook for updates of our inventory at "Two Graces", or stop by our beautiful shop in Ranchos de Taos.
Posted by Two Graces Plaza Gallery 68 St. Francis Church Plaza at 2:49 PM