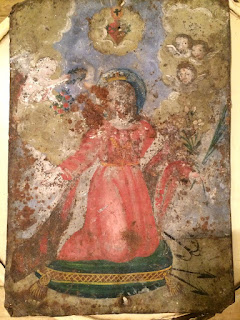 Saint Philomena Tin Retablo ca. late 1800's, (7”x10”) acquired recently here in Taos, then a few things happened. I am told this is a rare subject matter and that this retablo is attributed to ‘The Bee Stung Lip Painter’ Concepcion Abila. What I've learned about her and reminded of is that this is indeed a precious piece. A few of my own family members, favorite dear ladies they have been to me, were named for her. This Saint helps to intercede for impossible, hopeless and lost causes along with being the Patroness Saint of Infants & Children. Her story is Miraculous, I'm either keeping her or passing her on to a family member. A very precious Retablo. 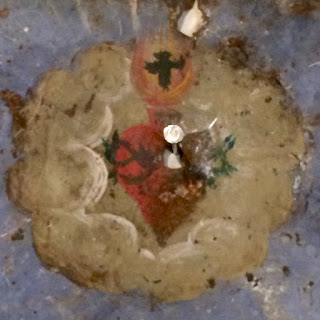 The story of Saint Philomena is that of a Roman emperor’s wrath and how that anger turned into the miraculousness that is the Girl Saint.
A Royal Family of the small Grecian State of Corfu met Publius a Doctor from Rome who taught them to embrace Catholicism. The following year on January 10, Lumena aka Philomena was born and Baptized as a ‘Friend of the Light’ (the symbol of the Sun to represent Christ, the symbol of the Moon to represent the Virgin Mother). At 13 Philomena travelled with her parents convoy to Rome to meet with the Emperor Diocletian to plead for Peace. The Emperor only agreed to terms for Peace if the young Girl would marry him. Her parents agreed, yet Philomena resisted as she had taken a vow of chastity to Jesus Christ. In a rage the Emperor had the young girl chained and put into a dungeon for 40 days. On the 37th day she had a vision of the Holy Virgin Mother who gave her courage to not acquiesce. 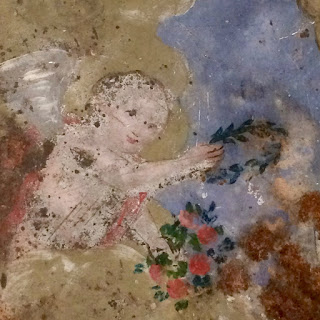 With the Archangel Gabriel by her side the young girl was bound to a pillar and tortured after which she was tossed back into the dungeon to be left for dead. There in the prison Angels appeared anointing her wounds with Heavenly Oils which cured her gaping open soars. Still refusing the Emperors wishes, he ordered that she be tied with an anchor around her neck and tossed into the River Tiber to drown. Yet the Angels interceded and cut the rope of the anchor, leaving it to fall into the mud of the river. The Emperor then declared Philomena to be a Witch and ordered her pierced with Arrows. 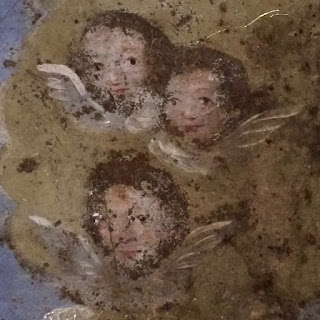 Again the Angels interceded.
Witnesses to these miracles began to convert to Catholicsm. Infuriated, Diocletian ordered that she be beheaded. At 3PM on a Friday afternoon a very long way from her family home in Greece she was beheaded ascending to Heaven. 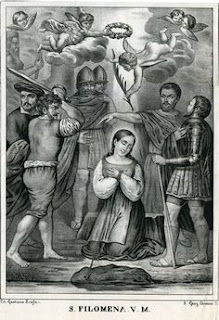 In May 1802, Saint Philomena’s resting place in the catacombs of Saint Priscilla at the Via Salaria in Rome remains were discovered. Marked by 3 Painted Tiles  containing the words LUMENA PAX TE COM FI along with the symbols of an anchor and 2 Arrows, a Javelin, a Palm bough and a Lily.

Symbology of an anchor reflects Faith in Christ in its similarity to the Cross, there is a Sacred Anchor in Greek and Roman Mythology, we also believe that an anchor symbolizes Hope, Refuge and Preservation of Life. To me I think of an anchor as being grounded and of being a tool of the Fisherman. 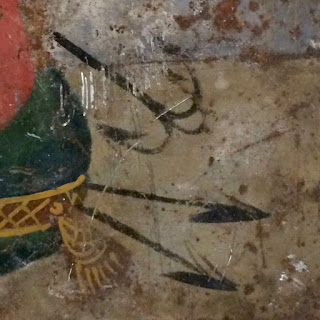 In August 1805 the remains/relics were moved to the Hillside Village of Mugnano near Naples, Italy. This Princess of Corfu has travelled a long way from her home, suffered and endured. To those who feel in need of help Saint Philomena is there for you, along with St. Rita of Cascia, St. Jude Thaddeus and St. Gregory of Neocaesarea. These 4 Saints together are known for those who are feeling Hopeless with seemingly insurmountable obstacles in front of them. 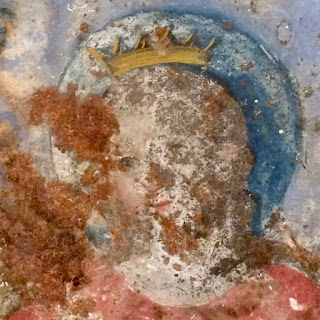 Blessings to you all, and please don't give up.
Saint Filamena, the Girl Saint