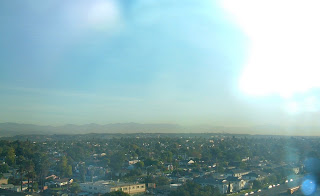 The view from our hotel window, yes indeed smog! Even though it doesn't show up in this picture we can see the HOLLYWOOD sign directly across from us. The Palm trees and other flora such as Bird of Paradise flowers blooming are a treat to see. Yesterday at the convention I saw a rather large hummingbird at one of the BoP flowers, really beautiful here from what I've seen so far. I'm currently hooked up to wireless at this Hotel and amazed at how easy this MacBookPro is to use! 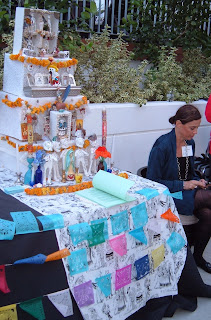 The Convention was to promote American Airlines flying directly to Santa Fe starting in mid-November, which is great. As for Taos, we were invited to tag along as part of a rather large Santa Fe contingent. Here's a pic of our table with my altar set up and Joannie as usual working the phone, on the plane in the airport, all business for her all the time, (I think she drives and works at the same time too, Note to Joannie: You drive to work, not work while you're driving). There were probably 125-150 people at this thing and who was who I couldn't even begin to guess. Displays set up all over the courtyard were, a Santa Fe landscape painter, a contemporary potter, (actually letting people try the pottery wheel), a massage and healing herbal remedy area, & Santa Fe cooking school producing some rather delicious food. I tried the Lamb Chop, the Corn Muffin stuffed with shrimp, the calabaceta stuffed with tomato, and the cocktail a Tequila based Chimayo(???), yum to everything and yup I do like food. Other than the food area our Taos Altar Booth was THE BEST, and we were given the best location in the courtyard, in the center directly across from the stage. The food booth had the worst location stuck in a back corner, for over 3 hours we had no idea it was even there. 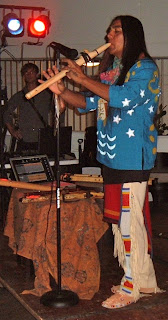 Taos Pueblo musician Robert Mirabal, was so gracious and wonderful, he even gave me a hug, jeez. He does have a whole lot of CDs to choose from so what to recommend I don't really know. Not to be negative, but like the new Bob Dylan Christmas CD, DO NOT GET the Mirabal Christmas CD, get one of the others! 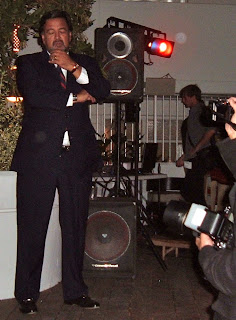 When I noticed NM Gov. Richardson walk in to the courtyard, I NOTICED, he has some sort of aura about him, very strange, a definite presence to the man. He gave a great speech and was super to take the time out to come to this event, wow. This is my worst pic of him, so sorry sir, but I messed up the good ones trying to get the flashed eye look out, maybe I still need some training with the Mac. Here he looks as sleepy as I was at this point, Holly turned up after her wonderful day of shopping and walking on the beach, and we packed up the altar and headed off to a nearby Sushi Bar, good but not as good as Sushi by Hattorri back in Taos believe it or not, BELIEVE IT, the Taos sushi bar is better by leaps and bounds. Same on you LA Sushi! then we headed for desert at a another nearby restaurant which RC Israel highly recommended for a special desert which yes Holly ate and loved it, I opted for the traditional Tiramisu and an espresso. So far so good LA, just a bit of a let down on the sushi thing but traffic-wise rather like Chicago, very wide highways full of cars, sometimes moving along at a clip and sometimes slowly.
Got to go and see what today brings....
Posted by Two Graces Plaza Gallery 68 St. Francis Church Plaza at 9:57 AM 3 comments: 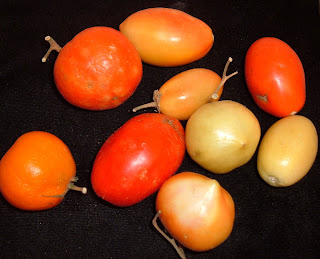 As some of you may know we got an early frost in Taos during the month of September. Which absolutely killed my tomato and pepper plants. I picked the peppers and pickled the hot italian variety, picked a basket of jalapenos and brought those to Jen at Love Apple. The tomatoes though were still very green, and rather then eat Fried Green Tomatoes, I called my Mom. She told me not only to put them on the windowsill to ripen but to put an apple or 2 in with them. Needless to say, Listen to Your Mother! Yes, the tomatoes are ripening since mid September, and yes some just rot away, and the stubborn ones of the bunch just won't ripen at all, change is difficult even for tomatoes. The results with the ripe ones have been a treat because here it comes, the recipe: Tomato Confit
Slice 1/4 red onion thinly, and chop one clove of garlic, (a clove not the entire head), add olive oil to a saucepan or small cast iron skillet, (this has to go in the oven so not something with a meltable handle) put all of these into the pan and sautee on high while you chop up approximately 3 ripe Roma style Tomatoes, add this to the pan and continue to sautee a bit now ad one and 1/2 Tsp Balsamic vinegar, some salt, pepper and a pinch of Rosemary, add about 2 Tblspn of Olive Oil. Put this into the oven which has been heating up to 400/450 for 15 minutes. YUM
Spread on fresh Bread or onto Pasta, or on Pizza, (but still use a tomato sauce and cheese on the pizza), or use it as a side dish for meat. YUM 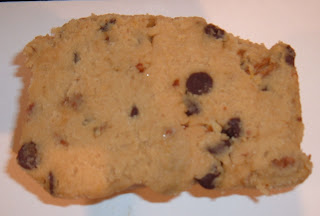 On the weekends we have desert, because when we have desert all week long we tend to put on a lot of weight. Thus being desert is only Sat/Sun or Fri/Sat at our house. Baking especially sweets requires paying strict attention to the recipe, as most people can tell you, I am not a one to play by the rules. When you make Chocolate Chip Cookies according to Nestle (the inventor of the fine treat) they tend to come out a bit slumped shall we say, spreading their way across the cookie sheet and not really all that wonderful. I split the batch into 2 parts half for one night ad half for the other. Get ready for wonderful, and in this case Butter everyones friend is the culprit.
Here's the recipe: "The BEST Chocolate Chip Cookies EVER"
1 stick of butter BUT hold back 1 TSP of the culprit, feed it to the cat or dog if you must
1/3 cup Dark Brown Sugar add 1 TSP Molasses,
(that's right just do it, why pay for that fancy expensive Drkst Brwn Sgr when you can do this)
1/3 cup White Sugar
1 cap full Vanilla Extract
(and yes you can make it yourself if you can find Vanilla Beans a t a reasonable price)
1/2 TSP Baking Powder
1/2 TSP Baking Soda
Beat this stirring vigorously, put your arm muscles into it, after all this is the only exercise I get
1 Egg Beat and stir some more
1 1/4 cups Flour mix this in until it's dough if it's too sticky you may add a bit more flour
but don't go overboard or your cookies will be stones
1/2 cup Chocolate Chips
1/3 cup Nuts Walnuts or Pecans (absolutely no Peanuts I am allergic to them)
Mix some more and spread this onto a sheet of tin foil, divide in half, no you may not make the whole batch in one night, the next night you will have the treat of Hot Fresh Cookies.
Oven is on 325 the rack is at the top depending on your oven heating
Divide half the dough into 6-8 cookies, a true cookie treat awaits in 8-11 minutes
do not burn them or overcook, as soon as you see golden edges they are done, YUM
Posted by Two Graces Plaza Gallery 68 St. Francis Church Plaza at 2:33 PM 2 comments:

Robert, I did not spray paint that UFO 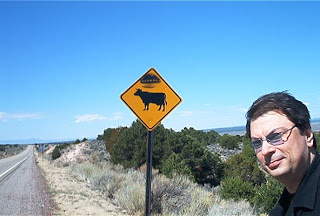 When we first moved here to Taos these UFO stencils were on a whole lot of cow crossing signs. It's really too bad they were all removed, they added a sense of humor and charm that is missing these days. Far too much homeland security paranoia.
Someone told me a story of how there was a person glueing small plastic cowboy and indian toys onto the middle of roadways years ago. People would go out looking for the latest edition of them to appear. Someone out there must have pictures of them and know more to this, I'd love to know more...
Anyway, this picture is posted here because I was asked to put a better picture of myself on my Blog page, so here's one I like, Robert & the beam me up Cow sign!
Posted by Two Graces Plaza Gallery 68 St. Francis Church Plaza at 3:25 PM 2 comments: