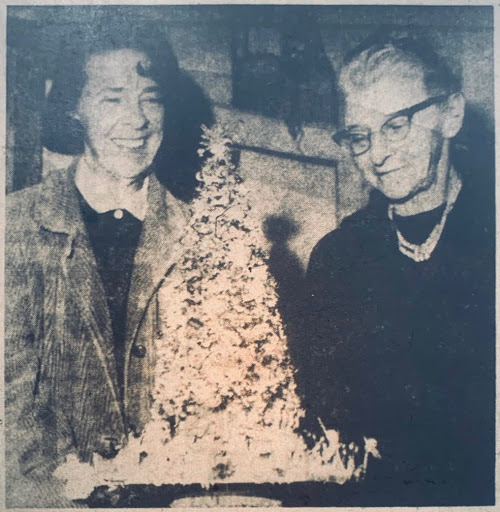 I first discovered the ‘Taos Friendship Trees’ in a 2013 exhibit at the Harwood Museum of Art, Taos. On display was a miniature Christmas tree covered in tiny objects including little replica ‘books’ by local authors Mabel Dodge Luhan “Winter in Taos” & “Edge of Taos Dessert”, D.H. Lawrence “Lady Chatterly’s Lover” & “Women in Love”, Frank Waters “The Man Who Killed the Deer”, and Dorothy Brett “Lawrence & Brett” among many others. The tree was labeled as being made by Dorothy Brett or at least once had been owned by Brett and gifted to Lucy & Burt Harwood. The tree, which is the most highly decorated of the few I’ve seen, stood out in a special way and I wanted to know more about it. Through further research we now know these as the Friendship Trees created by Dorothy Benrimo. I’m also told that a now long gone shop once on Kit Carson Road in Taos may have sold the Friendship trees to the public. 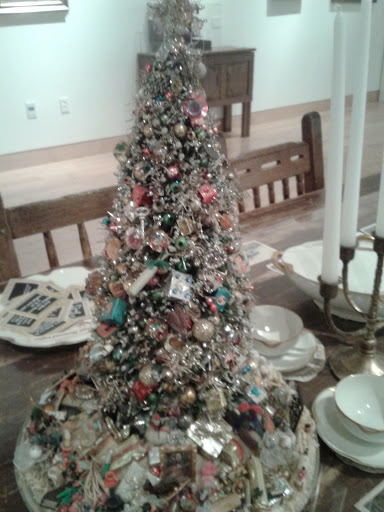 Once owned by Dorothy Brett, this friendship tree is in the Harwood Museum Collection

A few years went by, then one day I discovered a similar tree in a random box in a garage, the box was full of bits and pieces that had fallen off the tree but I recognized it as being similar to the ‘Brett’ tree in the Harwood Collection. It makes sense that through the many years the two Dorothy B’s of Taos (Benrimo & Brett) would become interchanged with one another. The music box the tree had been attached to had been smashed due to poor packing, it could not be saved, but with all the little bits and pieces that had fallen off I proceeded to glue them into place. Remounted anew onto a vintage round base the tree once again came to life. The fragility of these trees keeps me from storing ours away after each Christmas season. 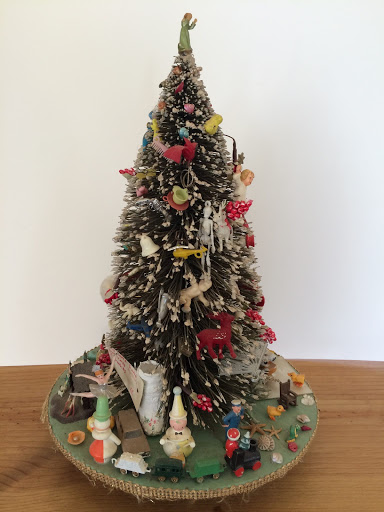 The Benrimo Friendship Christmas Tree in our personal collection 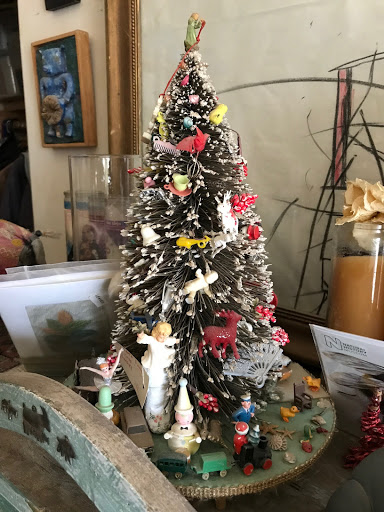 Not as ornate but with working Music Box, Friendship Christmas Tree by Dorothy Benrimo

Recently another of these friendship trees became available (I’ve had three different ones, I always keep my eyes open for them) which I purchased immediately. This one was little off kilter as it sat on the music box, but the music box actually worked, it is mesmerizing to behold while it spins and plays Jingle Bells. Soon afterwards we discovered a piece written by longtime Taos bookshop owner Claire Morrill in her must read masterpiece tribute “A Taos Mosaic” of 1973. 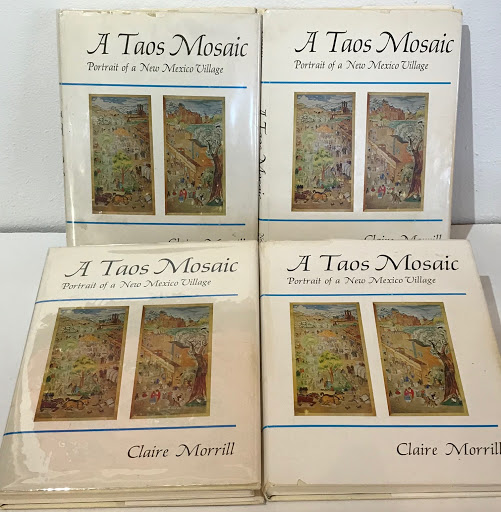 "A Taos Mosaic" these Hardcover books are currently available at Two Graces,

with dust jacket in broadart protective cover signed by both Claire Morrill and photographer Laura Gilpin $50.

In the book she describes the tree and how it came to be, I have included excerpts here:

“…I guess the thing that will best show the special flavor of Taos happenings is my own little Christmas Tree, which I have only because I happened to be standing in the right place to be struck by this benevolent streak of lightning. It came about… through an instinctive and typical Taos response to what Lawrence Clark Powell would call ‘an act of enchantment’.

I am the eighth Taoseno who… has been the recipient of one of these jewel-like miniature trees inspired and engineered by Dorothy Benrimo. Dorothy, whose late husband was the artist Thomas Benrimo, is a Taos designer and silversmith of such distinction that her work has toured the country in month long showings at galleries and museums under the sponsorship of the Smithsonian Institution.

At a friend’s house I was engrossed in admiration of the latest miniature tree she had done when Dorothy came by.

I was enchanted all over again and equally appalled. For where did all these exquisite miniatures and marvelous little decorations come from? How many would there have to be?

She was quite casual about it. “Oh, there have to be six or seven hundred. You pick them up yourself all year and I will, too, and then before Christmas I’ll send out postcards to your friends, people you know well, to anyone we think would like to bring in some little thing. And then some day in December a few of us will get together and have dinner and trim the tree.”

But I did worry about it. All year I hunted for miniatures, a half inch to three-quarter inch in size, and they seemed to elude me. I began to alert close friends and my sister Anne, who came up with wonderful little treasures, tiny mushrooms and ladybugs, ducks, chickens, and geese.

…eleven of us who gathered to trim the tree included a friend of Lib White’s from Norway who, though a complete stranger to me, had spent most of the past week mounting tiny sequins onto the tips of small weed sprigs and with paints transforming dime-store angels into little celestial musicians.

Dorothy had brought the fifteen-inch artificial tree, which she had mounted on a round tray revolving above a music box. With tinsel and glue the trimming began. There seemed no end to the wonderful miniatures coming out of their boxes: tiny original Taos paintings, sculptures, ink drawings, weavings, and santos; animals, birds, flowers, and insects; miniature train and painted Sicilian cart; bells and musical instruments; typewriters, midget dictionary, and replica of the front page of the New York Times; stereo records and books (one of them entitled Inside Taos by Claire Morrill); and dozens of other things. kenny Anderson, who was seven, had parted with one of his real treasures, a tiny hot dog, and my great-niece, Barbara, had written a distinguished little poem on a tree-shaped paper.

We eight Taosenos who have these exquisite trees don’t wait until Christmas to bring them out, admire them, and show them off.” 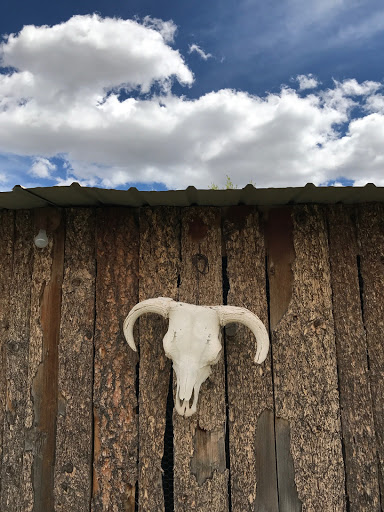 The following is most likely a newspaper clipping from the Taos News of which is a photograph and report by Regina Cooke:

Dorothy Benrimo and Claire Morrill stand beside the friendship Christmas Tree made for Miss Morrill by Mrs. Benrimo and trimmers, Spud Johnson, Milford Greer, Robert D. Ray, R.C. Van Arsdel, Otto Pitcher, Elizabeth White, Vera Simonsson and Genevieve Janssen. Mrs. Benrimo began working with friendship trees some years ago when living in New York, and since then has made thirty or forty. The trees are mounted over a music box and are trimmed with tiny items from over the world given by friends of the recipient. Mis Morrill’s tree contains countless gifts from seventy-five persons, among these paintings by Milford Greer, Robert Ray, and Lib White, and a book of sketches by Spud Johnson. Jewelry, Angels, creche figures, Santas and animals are of the varied items decorating the green artificial tree covered over with yards of tinsel. 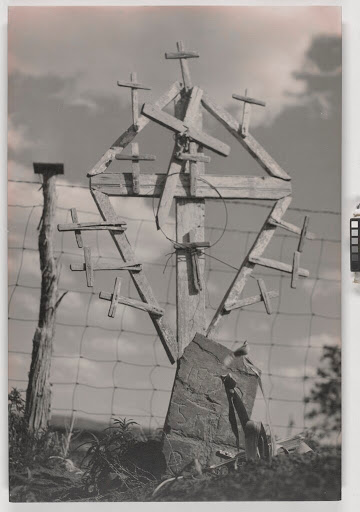 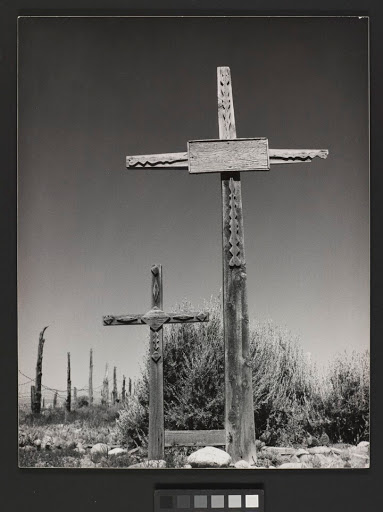 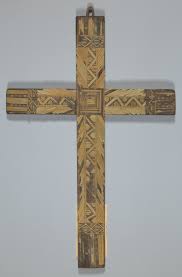 A Straw Inlay Cross made by Dorothy Benrimo in the Spanish Colonial style, Harwood Museum Collection 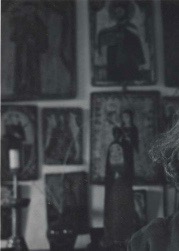 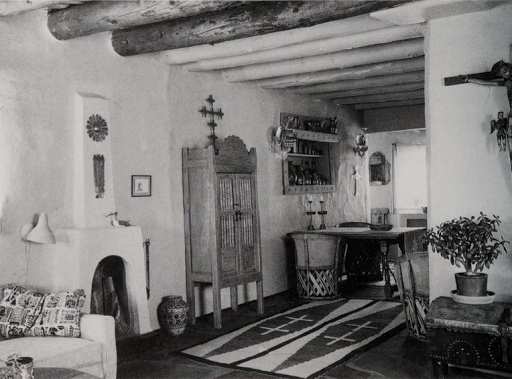 Interior of the Benrimo Home as it once was 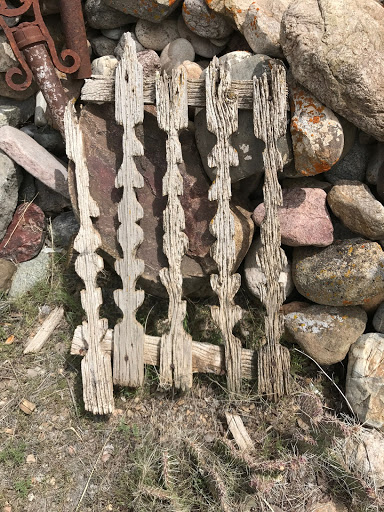 Camposanto Cemetery posts which were once at the Benrimo home 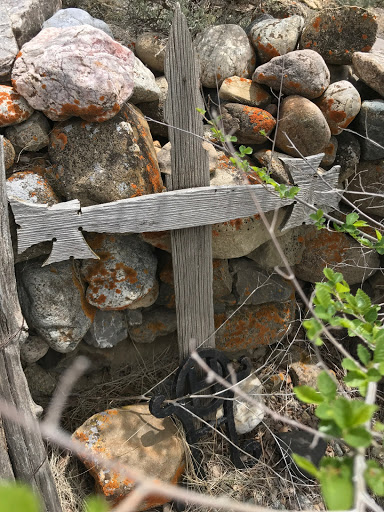 Camposanto Cross once at the Benrimo home 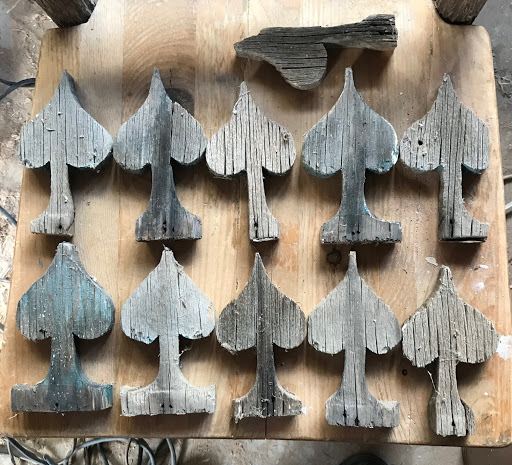 Dorothy Benrimo was known as a pioneering figure in the fine art of jewelry making. Some of her designs are thought to include theological references, but they also make use of her knowledge and inspiration from Mayan and Aztec cultures and of course her deep understanding of the Tiffany studio. She would refer to her jewelry as having an emphatic depth. Benrimo studied at Carnegie Melon University in Pittsburgh, graduating in 1925. She received Tiffany Foundation Fellowships in 1924, 1925 & 1928 and worked at the Tiffany estate to further her knowledge and research. She taught at Carnegie Melon and later at Pratt University up until she and her husband moved to Taos, New Mexico in 1939. Benrimo was a collector of northern New Mexico Spanish Colonial Santos (Retablos & Bultos) and documented the crosses of the Camposantos though her photographs which were published in book form with a forward by Rebecca Salsbury James and notes from E. Boyd the curator of the Spanish Colonial department of the Museum of New Mexico. The photographs were exhibited in 1966 at the Amon Carter Museum of Western Art. She was one of the few women artists active before 1950 to enjoy a successful career in the arts. Jewelry by Benrimo is difficult to come by, we have had one necklace by her and I've seen one other. 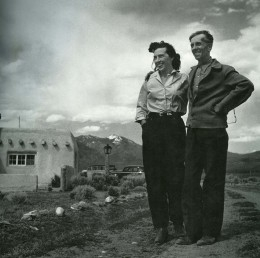 Dorothy & Thomas Benrimo at their home in Ranchos de Taos

Dorothy and Thomas Benrimo must have been true assets to the Taos arts community, their spirit shines to this day through their acts of enchantment.

As Freida Lawrence once wrote to Dorothy: "Your letter was one of the gayest I ever had in my long life.”