Tony Reyna was born on February 1, 1916 (there is a conflicting date of January 31, 1916) for the past few years he would tell people he was holding out to reach 100. The son of Crucita and Helario Reyna of Taos Pueblo, he was given the name Cheto (translated to Hunters Talk).
I first met Mr. Reyna at his shop on the Taos Pueblo Road in 1991, where he has always had the best arts & crafts for sale from various Native American artists.
In May 2014 I had the opportunity to conduct an interview between Mr. Reyna and National Geographic Travel writer Jeannette Kimmel.
Tony told us his story, an amazing life story, which included joining the army in 1941, of being a POW during World War 2 in the Philippines, he was on the Bataan Death March. During his service he was assigned as a spotter, his nickname was Eagle Eyes.
When he returned from the war he decided to build his home and Shop on the road into the Pueblo. It took 10,000 hand made adobe bricks to build it. He was given credit by the local Randall’s Lumber Yard (a family member has told me it was Ilfields Hardware store, Mr. Reyna specifically said Randall's) to purchase doors and windows for the home and was able to repay them within 2 years. 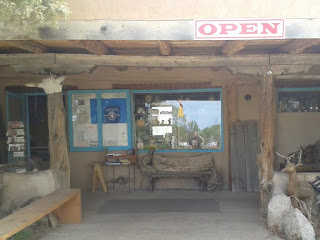 Front of the Tony Reyna Indian Shop
Since 1950 Tony Reyna’s Indian Shop has been a fixture at Taos Pueblo. Today, there are many shops at the Pueblo, his was the first. Mr. Reyna told us that he sells strictly Indian, and that he always buys from any Native Americans offering to sell him their arts & crafts. He considers it his responsibility “It’s a good feeling to help people.” On one visit to the shop, now run by his son Phillip, I noticed stacks of crafts behind the counter. Whether they need more merchandise or not, they have been a terrific support system to encourage so many people to continue traditional native crafts.
In 1982 and again in 1992 Mr. Reyna was elected Governor of Taos Pueblo, today he is a lifetime council member, “Being Governor is a tough job, 24 hours a day.”
Tony has also served as a Police Commissioner, on Museum Boards and has been the recipient of many, many awards and honors. In 1992 he was instrumental in gaining UNESCO World Heritage Site status for Taos Pueblo.
1950's photo of Taos Pueblo
As I looked around the Reyna home there were objects of beauty everywhere. Years of purchases for the shop, at times many items made their way into his own personal collections. A much cherished framed photograph of the Taos Pueblo Blue Lake hangs within view of his couch. He can no longer make the annual tribal members pilgrimage to the lake, but through all his years he has walked that trail more than most.
I found myself drawn to certain items around his home such as a painting of the back of the Ranchos Church which looked similar to or ‘in the style of’ Emil Bisttram. When I asked about it, Tony told me it was painted by his wife Annie Cota, (d.1993) who was one of Bisttram’s students, she was a talented artist. On the opposite wall hung a painting by the great Bisttram himself of ceremonial Koyemsi, a true treasure worthy of any Museum collection.
I’m always fond of seeing the handmade furniture here in Taos with it’s rich history. In the Reyna kitchen I noticed the beautifully crafted table and chairs. I had to ask about them, which then revealed another layer and part of Mr. Reyna’s life story. He had crafted the furniture himself, telling me that before he joined the army he had taught cabinetry to people of the Navajo Nation. Usually I ask people if they have signed the undersides of the furniture they made to preserve the history of the piece, I just don't remember if he had or not, I'd need to ask his family.
I truly believe that Tony Reyna has lived such an incredible and long life because he has lived in beauty. In my notes I had written, this man is surrounded by the beauty of his life. 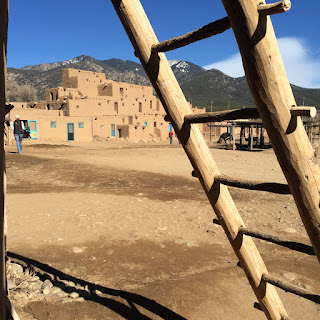 View of Taos Pueblo
“Beautiful Old Age”  D.H. Lawrence
It ought to be lovely to be old
to be full of the peace that comes of experience
and wrinkled ripe fulfillment.
The wrinkled smile of completeness that follows a life
lived undaunted and un-soured with accepted lies
they would ripen like apples, and be scented like pippins
in their old age.

Soothing, old people should be, like apples
when one is tired of love.
Fragrant like yellowing leaves, and dim with the soft
stillness and satisfaction of autumn.

And a girl should say:
It must be wonderful to live and grow old.
Look at my mother, how rich and still she is! -

And a young man should think: By Jove
my father has faced all weathers, but it's been a life! 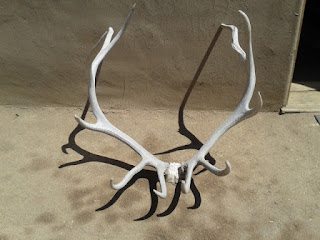