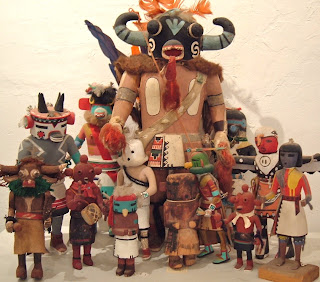 13 Kachina Dolls, carved of Cottonwood. As of June 10, 2012 I have added 2 dolls to this group, photographs of them are posted here after the old Bean sprout doll. Two Graces sells vintage traditional Hopi or Zuni dolls, we do not sell Navajo carvings which I refer to as PowWow Dancer dolls that are passed off as Hopi Dolls. Whenever possible I have included a 4 3/4" Coke can for size/scale comparison. These dolls also have either original or replaced vintage cotton string around necks for hanging. Also, feathers on dolls are subject to removal if they are bird of prey feathers, mites can eat feathers down to the nub, but feathers are replaceable with usually turkey feathers. Although most dolls will stand on their own and should, they are traditionally displayed hanging on the wall and sometimes from the viga ceiling beams. Starting with the BEST...

Hopi Bean Sprout Katsina 7" tall, SOLD ca. early 1930's, below this doll is lying between the pages of the book "Classic Hopi and Zuni Kachina Figures" I believe this doll to be by the same carver and same time period. The eye, kilt sash and proportions are all incredibly similar if not the same. This doll was purchased from an old Taos estate where he hung over the fireplace for many years. Left foot is broken off and long gone, discoloration from fireplace soot. 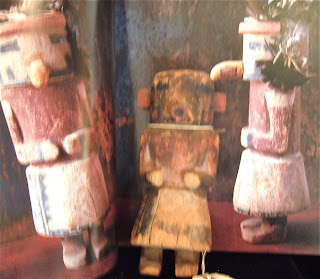 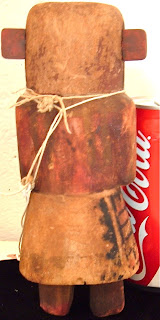 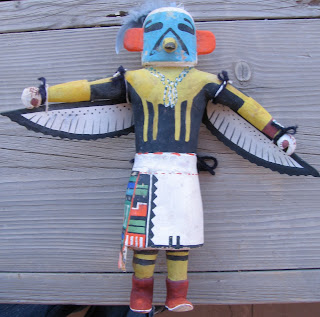 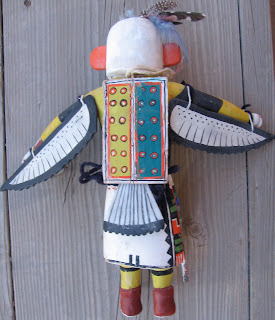 Please Note: the original eagle feathers were removed from this doll and replaced with wooden wings and a wooden tail feather bustle. The tablet on this doll's back is made from cardboard and original to the doll, the kilt sash is made of a fiber board, also original to the doll. The unusual use of orange paint is probably due to this carver not having access to red paint at the time. I think the orange color makes this doll extremely special. This doll even in an 'action' pose will stand on it's own.

This is an unfinished carving with nice patina, the carver used a piece of a discarded corbel from an old building, rather unique and beautiful in it's own right. SOLD 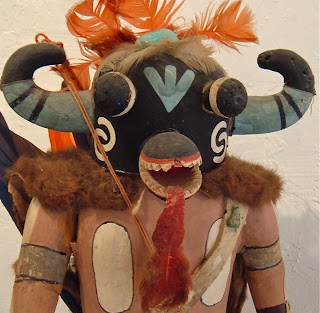 This doll stands a whopping 19 1/2" tall! ca. 1940's priced at $6,500. with some damage to feet horn on right side. I have only seen 2 other dolls of this scale, this may be considered a Volz type doll. Nice fur cape, mostly original feathers, (please note: all bird of prey feathers have been removed and brought back to Hopi). Outstanding, we believe this to be a doll made as a Trading Post display piece by Jimmy Koots. I few years ago I was fortunate to see this particular Ogre Kachina dance in the plaza at second mesa about 38 Ogres entered the plaza following a Koyemsi drummer, amazing. Please note: there is currently a very similar doll available from John C. Hill Gallery of Arizona, you can see it in the latest American Indian Art Magazine 35th anniversary issue. 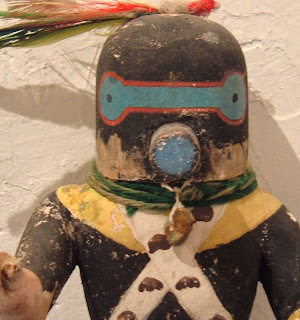 Sipikne (Zuni Warrior) Hopi Katsina, 11" tall ca 1930's/1940's. SOLD. This doll has what I would call acid green yellow and blue paint, perhaps anallyne coloring. He has a lot of paint wear which may denote a well loved and played with doll. From a very nice old Taos estate, who's father was an artist and had a frame shop/gallery here. Normally the feathers on the head would point back but as this is a 'wallhanger' I have pointed the feathers to the side, these feathers have been replaced from the original bird of prey feathers, the ruff which was also all bird of prey has been removed and not replaced, since replacing the ruff around the neck could not be done in a satisfactory way I've opted for a vintage turquoise and old green wool necklace. This doll is in an old action pose, one leg is up and one down, the feet have been repaired. Most old dolls have broken feet, which are usually re-glued in a very messy manner, not in this case. 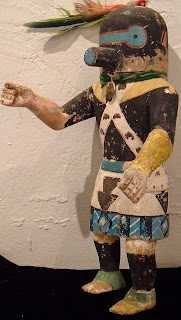 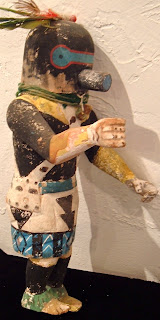 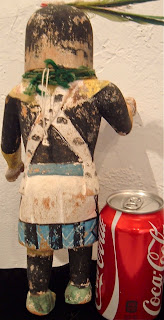 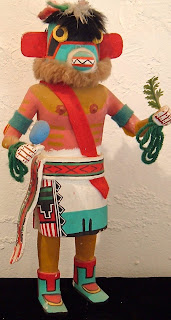 From the R.C. Gorman estate, includes auction cards which took place in August 2008. RC had a very large Kachina collection this being what I consider to be the best of the lot, it is of the rarely carved Hochani Katsina 13" tall SOLD Unusual with very detailed chest nipples! 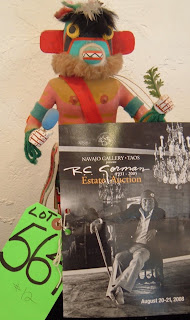 Eototo 'the Chief' often depicted with his lieutenant Aholi which as a large cone-like head and not my favorite doll. This doll stands 10" tall ca. 1970's from a local Taos estate SOLD One leg up one leg down action pose.

The Parrot 'Zuni' Warrior Kachina a protector, 9 1/2" tall SOLD purchased at Hopi First Mesa ca. 1980 hanging from the ceiling of a Hopi home. One leg down one leg up, 'action pose', the carved parrot on top of the head has been slightly moved to the side in order for this doll to hang on the wall.

Another doll from a great Taos Estate a Poli dancer, appears in the Butterfly dance, has a female mate with him, (the female would be wearing a large butterfly tableta, this is considered a springtime social dancer). Very rare carving ca. 1950's attached to a base 10" tall SOLD the rattle and twigs have long broken off and are gone. 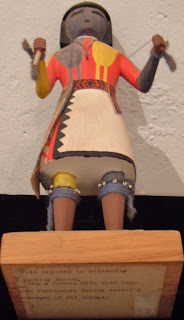 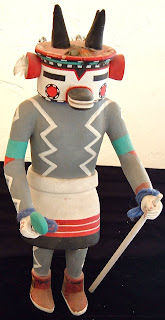 Although carved at Hopi this is a Pueblo style doll of an Antelope Dancer at 13 1/2" tall a rather large size, stands on it's own leaning on cane, illegible signature on bottom right foot, ca. 1980's SOLD. This doll captures the movement of this ceremony, really special. 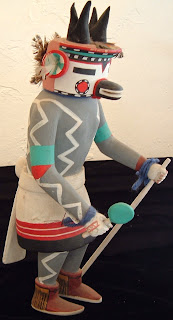 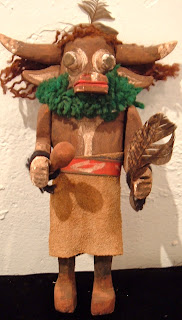 A Zuni carved doll with leather kilt/skirt ca. 1950's/1960's, typical of this period the arms are carved separately and nailed onto the body, almost 8 1/2" tall. This doll does not stand on it's own the feet are cut at an odd angle. SOLD 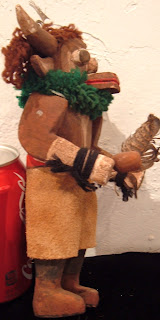 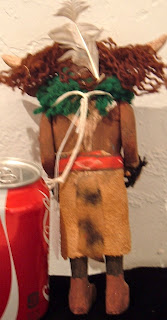 Probably Zuni carved Koyemsi or Mud Head Katsina SOLD. just over 8 1/2" tall ca. 1950's/1960's. The beak, long skirt/kilt and cloth neckerchief all indicate to me that this is a Zuni doll. The kilt has nice wear indicating a doll that has been played with. When I aquired this doll it had a lot of what I believe to be florist putty on the bottom of the feet, more than likely for someone to display it in a curio cabinet or on a shelf without it falling over, as the feet are rather short. This clay has been removed and cleaned up, I've also added a small vintage drum slung over the shoulder, as Koyemsi are often the drummers for the Kachina dances. 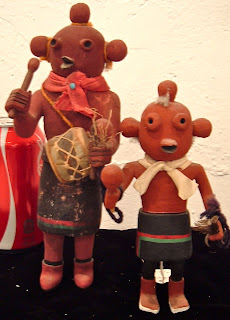 Not everyone can love a Mud Head, when I was first collecting these were easier to come by, not flashy and colorful just a rusty brown with strange looking knobs on their heads, nowadays these are some of the most desirable dolls. 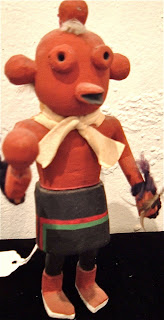 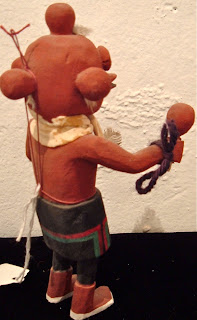 A few years ago we were at a dance at First Mesa where the Katsina dolls being given to the girls were attached to ears of dried corn, here's one of those dolls aquired from one of the girls in the audience, not old but rather special, 5" tall SOLD, ca. 2000. This is in the form of a Belly Ache doll, similar to a route 66 doll, but with legs instead of a base.

Another Belly Ache style doll, with legs for a ceremony not a base for a tourist. 6" tall priced at SOLD, his legs are twisted to the side Kwivakatsinam.

Now listen up: there are a LOT OF FAKES OUT THERE, (especially those of you who purchase on Ebay, argh) and I'm not talking the aforementioned Navajo Pow Wow style dolls. This type of doll is being produced by someone who is amazingly proficient, sometimes they even use parts of old dolls. They are aged with dirt and grime tossed onto them, then sanded to indicate wear, but TRUE WEAR looks different, hold a doll in your hand as if you were to play with it, the first place the paint will wear out is around the skirt not all over the edges a true sign of someone trying to falsify wear. Also the feet are usually flat, which is a doll that will never stand on it's own. This doll looks every bit desirable but is a fake, PLEASE REFRAIN FROM PURCHASING THIS TYPE OF CARVING. (This doll has been removed from the collection)