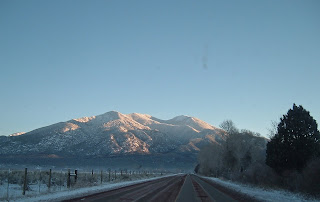 I awake at 6:15AM, outside it's -15 degrees below zero, still dark outside. I'm not quite ready to leave until pulling on a second pair of pants over my jeans, this must be the coldest day ever here in Taos, New Mexico. Today is the first of the new year when Taos Pueblo has it's ceremonial Turtle Dance, which will begin at sunrise. Hoping to get there to see this ceremony begin, I'm off towards the Blue Mountain covered in a fresh blanket of snow, it's daylight yet the sun has not peaked itself over the mountain quite yet, there's still time... 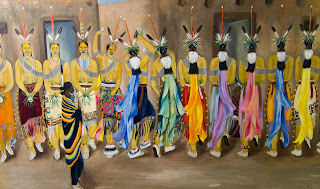 Quickly I arrive and park the car in the first visitor lot, closest to the entrance, not many people here, and I don't hear anything yet. Expecting to hear the beat of a not too distant drum, it's the ceremonial rattle I hear instead. Walking up the alley to the Plaza, it's begun in front of the Taos Pueblo Church a row of forty bare-chested men, singing a low chanted hum of the Tiwa language dancing soft steps in the squeaking snow beneath their feet. Each hold a gourd rattle painted white with bows of evergreen wrapped around the handle. A single Turtle shell rattle tied to a leg and many sleigh bells wrapped around each ankle, most have crocheted white leggings, all wearing traditional kilts of Monks cloth and a variety of designs. A headdress of Parrot, Hawk, and Eagle feathers adorns the back of each dancers head, a white stripe of clay painted under each chin which is marked into a checkered row. Reddened chests look sunburned, yet the sun has still to rise over the mountain. The drummer was using an old drum slightly larger than what I have a photograph of here, it was covered in what looked like the hide of a Buffalo with much of the hair still attached. 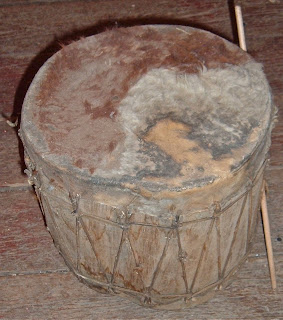 There may be 12-15 guests witnessing this ceremony when I first arrive, in just an hour there are now 50-60 visitors. The breath of the person next to me knocks me over with fumes from the alcohol consumed last evening. Taos Pueblo ladies are in the first row of spectators wrapped in colorful Pendleton blankets, trying to keep warm and transfer their thoughts and prayers to the men dancing. It must be working for the men aren't keeling over having turned blue with cold and frostbite. In the background all around the plaza, Taos Pueblo Priests (caciques) watch over the ceremony and the spectators. Many of the elders I know are nowhere to be seen, perhaps watching from rooftops or waiting in the Kivas.
Today is also the transfer of the Lincoln Cane and Governor's Cane to this year's new Pueblo Governor and new governing body. The ceremony for which takes place in the afternoon. If you missed the Turtle Dance and are able to witness this pay close attention to the canes, they are part of the living history of the villages known as Pueblos.
Warning: No cameras are allowed and please stay out of the way.
http://www.tradebit.com/filedetail.php/110719749-oku-shareh-turtle-dance-songs-of-san
Pasting this link into your browser will allow you to hear a similar song to Taos Pueblo of the Turtle Dance from San Juan Pueblo. It is said that the turtle dance ceremony came from the people of Laguna Pueblo through to Isleta Pueblo, to San Juan Pueblo then to Taos Pueblo in the mid 1800's. Someone once told me that the Taos Blue Lake is also called the Turtle Lake. The turtle in many cultures is an important symbol sometimes depicting a lake or body of water, sometimes of Mother Earth. 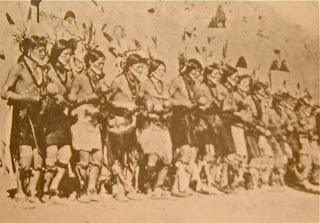 It had been 11 years since I'd last been to the Turtle Dance here. We visited Taos for the millennium 1999-2000, just a couple more spectators at the ceremony that new year. On that day it began to snow, a soft light snow, an eagle circling over head made me feel the welcome of Taos Mountain beckoning us to stay. A few years later we moved here permanently, thank you Taos Mountain for accepting us. Thank you to the people of Taos Pueblo for allowing us to be spectators at this wonderful blessing. 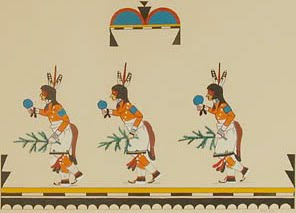 Photographs and images here:
"Road to Taos Pueblo 1/1/11" Robert Cafazzo
"Turtle Dance" painting by the Honorable Lady Dorothy Brett (notice the body paint markings this is usually done for the afternoon dance).
Taos Pueblo Drum with cowhide skin (extremely similar to the one used at today's ceremony).
"Turtle Dance Taos Pueblo" 1916 attributed to B.G. Randall
"Three Dancers" Adrian Padilla of San Juan Pueblo (Ohkay Owingeh)
Please Note:
As much of this has been documented in the past through photographs, sound recordings and paintings it has now become a part of history. Some people will argue that I should not be writing anything at all here. Some will take this for what it is which is a tribute in my own words and from my memories of an event that took place on a particular day that I experienced. If in the future I decide to change place names to fictitious names then so be it.
Thanks for reading...
Posted by Two Graces Plaza Gallery 68 St. Francis Church Plaza at 11:54 AM