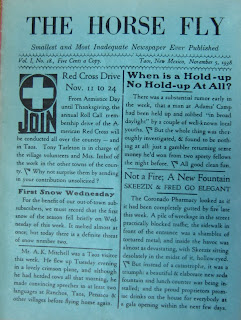 Did the Ground Hog See His Shadow on Thursday? Or Did he Get Discouraged? ---
And if so What of it?
Solemn discussion as to whether Mr. Weather Deciding Ground Hog saw his shadow on February second, or whether he didn’t, has occupied local gossipers for two days, & the argument is still raging. Certainly the sun shone, for at least two minutes, early in the afternoon, and staff artist McAfee here calmly settles the matter by actually catching the elusive fellow in the very act of casting the famous shadow: but, gosh, he’s looking in the opposite direction! Maybe he didn’t see it after all…
APOLOGY
Gentle Reader: Please excuse headlines this week.
Business
Just as rotten, they say as usual.
Meantime, lingering clouds slowly crumble into snow, capping the Sacred Mountain.
WARNING! Mid-February is Dangerous!
February is notoriously the most treacherous month of the year in Taos. People seem, at this time, to become suddenly conscious that the winter has closed in on them in an oddly irrevocable way. Business is Bad, farm work is at a stand still, there’s nothing much to do, a horrible depression rears it’s ugly head, & Strange things happen.
Sometimes throats are cut (this gets into the papers, the hospitals & the penitentiary): sometimes families are broken up (this may never get out of the court house, but there it is just the same); and sometimes it’s simple, old-fashioned broken hearts (maybe nobody at all hears about this, but it may be the worst of all)…
This year, so far, nothing of the spectacular variety has occurred; but it’s interesting to notice that the usual preparatory rumbles are being heard. In a way, it’s like the ominous silence that’s said to presage n earthquake; and yet it isn’t a silence, although it may be quiet: it’s an insidious, ingrown gossipy, ugly tendency to mind-your-neighbor’s business instead of your own.
If you haven’t noticed, just cock your ears at a slightly different angle, and then get ready to shudder.
You can’t call this news; it may sound like a sermon; maybe it’s just February getting on the editor’s nerves: but what it’s intended to be, is a reflection of what’s going on in our town.
We hope our mirror has a flaw in it.


Rubber Baron
Our banker reminds all local businesses not to take checks written by Robin Barron.
Valentines: A complete line, comic, sentimental, gay or serious at any price!
First Snow Wednesday
For the benefit of our out-of-town subscribers, we must record that the first snow of the season fell briefly on Wednesday of this week. It melted almost at once; but today there is a definite threat of snow number two.
Skiing as Usual, However
In spite of warm weather and slushy snow, unflagging winter sports fans have skied as usual on Sunday & Wednesday.
Ski Groans of the Week
Miriam Bright: Sprained ankle
Margot Beutler: wrenched knee
Mak Ilfeld: Hang-over from malaria attack
Reno du Pasquier: Hang-over from malaria attack
Len Coyne: down in the mouth over the fact that he won only 3rd place in a fourth class race at Santa Fe last Sunday.
Reward: For Missing Goat. It is reported that Mrs. M. Saddler & her children Martha & Gary are offering a $5 reward for the safe return of their pet goat. The goat answers to the name Henry. He was last seen in the back of the family Pick-up truck at the local grocers, it seems the rope was too delicious for the pet to resist and he proceeded to eat it, until absently the rope came loose and off went the goat. Anyone finding the goat should be in contact with this paper.
Violence in two Bars Thursday Night Wrecks property & faces,
doused light sends four men to jail and one to bed with a bullet wound in his head!
Silviano Trujillo is in a serious condition at his home in Ranchitos, suffering from a bullet wound over his left eye; Dave Sena, Elias Trujillo, Pete Pituzus, and “Sr. X.” are in the County Jail; and both the Don Fernando Tavern and the Ranchitos dance-hall & bar are considerably wrecked, as a result of drunken outbreaks in the two entertainment pavilions Thursday night.
At the Ranchitos Dance Hall, the lights were extinguished, either as a result, or for the purpose of violence; & it is not known whether Trujillo was shot accidentally or with criminal intent. However, a certain “Senor X.” is being held on suspicion. Attending physicians state that Trujillo’s wound may not be fatal.
The Don Fernando tavern brawl wrought less serious human wreckage, but glassware and other property was shattered, & the bar-tender, by-standers and several deputy sheriffs were involved in a series of stupendous battles which included a good many punches on a good many noses and jaws, before the recalcitrant lads were safely lodged in jail. They have refused to talk, except to give their names, & the doubtful information that they are “from Albuquerque”…
So much for Café Society.
Two Eye Witnesses Tell a tale of Woe
Two Bar-room incidents of the week, (or was it the same one?) recounted by eye-witnesses:
1.)  I was just walkin’ by. See? An’ here come these guys bustin’ outava door carryin’ another guy feet first, an’ fightin’ like nobody’s business. They didn’t seem to care a rap how they got ‘im out, so they darn near tore his pants off, right there in the street in broad daylight. One woman turned an’ walked away; another one craned ‘er neck. Before they got ‘im to the jail, they’d all fel in the gutter twice, see? But they finally got ‘im in there.
2.)  I don’t know what happened. I was just sitting there drinking a hot rum, & a fella came over and hit me. That was him, just went out of the office. I guess he don’t remember it. He didn’t mention it and I didn’t either. I’m sort of funny that way. –Come on, let’s go over to the bar and have a hot rum.
Moral: February IS Dangerous. You just never can tell when it will be your face on the bar-room floor.
Lastly, a Fair Warning: For those of you who wish to leave Taos with 1 Million Dollars in your name, you will need to bring 2 or 3 Million to begin with, we’ll do the best we can to see that you leave with 1 million and perhaps a shirt on your back! 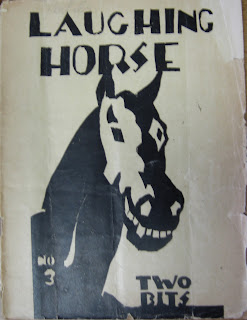