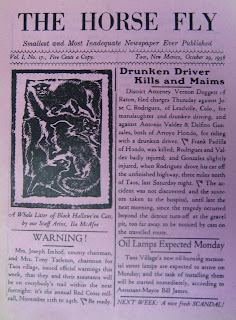 "Those who cannot remember the past are condemned to repeat it." re: George Santayana
It is with this quote in mind that I have posted these stories in 4 parts. We should learn from the lessons that history has to teach us, even when our history is quite silly. Hopefully they will make you chuckle as I have upon reading them. Although I have tried to organize them in an arrangement that will enhance and delight the reader, they are quite random. As with all stories, some of it is true. I thank you for your input and for reading.
The next few blog stories are that of the writings of Spud Johnson for his publications of the 20’s & 30’s “The Horse Fly” & “The Laughing Horse” mixed into the lot are my own versions of similar tales. All are typical of the type of very DRY humour that Taos tends to be known for.
This reporter is pleased to report that he is still 'alive & kicking' after quite a turn of events.
The Sisters at Holy Cross Hospital bought a case of beer the other day, and that sounds like a party, doesn’t it?

Cynical Taos Poet Commits Suicide
Ramon Zarro, cynical & secretive Taos Poet, attempted suicide several times this week, according to an anonymous communication received by the Horse Fly this morning. The unsigned letter states that he “took arsenic on Tuesday, strychnine on Wednesday, cyanide on Thursday, & cut his throat with a razor Friday night." He is not expected to live, although, as a student of Emil Bisttram’s occultism, he may be reincarnated.
Efforts to check this amazing report have provided fruitless, although his few intimate friends admit that they have not seen him since Monday.
On the editorial page is printed what may be his last poem, a characteristic composition, which seems to indicate that his tragic act was the result of an unfortunate love-affair with a ‘lady poet’.
The Distaff Side of the Taos Art Colony
Helen Blumenschein is the only female artist in Taos who shoots band-tailed pigeons, a species which will soon be as extinct as the passenger pigeon unless the Federal Government restricts the venal commercialism of various State Fish & Game Commissions.
Elea Nora Kissel is the only female artist in town who shoots snow-birds and song sparrows for bird pie. Incidentally she is going to be a ‘sandwich man’ during fiesta. Watch for her.
Dorothy Brett is the only female artist in town (or out) who shoots pool: but her keepers won’t let her do it often.
Gentle Ila McAfee eats raw meat. Her husband Elmer Turner, complains she even has cannibalistic tendencies and has been known to gnaw on freshly killed Texans.
Marina Dasburg shoots New-Dealers or else scares ‘em to death. She wears the largest Wilkie button in captivity.
Of Man, Love is a thing apart from Life. It is a Woman’s Whole Existence. G. Bauman 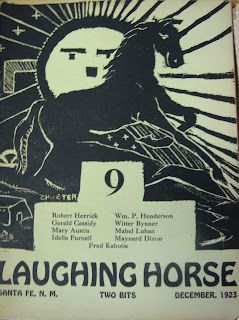 My sincere apologies for the "amp" after each "&" symbol, it seems to be impossible to delete!
Posted by Two Graces Plaza Gallery 68 St. Francis Church Plaza at 3:53 PM