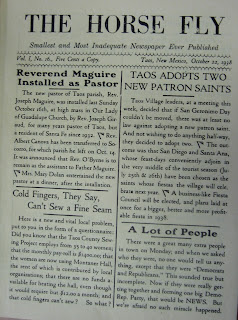 Snow Friday AM Nips 3 day Spring in Bud
Nipping in the bud a 3-day promise of Spring, snow (and rain) fell on the just and the un – etc. In short: more Mud.
March came in like a lion; or at any rate it was snowing again along about midnight, Feb. 28.
News story complete with moral
A baby cyclone was a surprise visitor in town last Saturday. Precisely at noon, a column of dust 100 feet high and several feet in diameter, appeared out of the still hot sky, snapped two of the large glass bulbs atop the Conoco Gas Pumps, skipping the middle one in the row of three on the north side; then moved sedately across the street and shattered Bob Abbot’s front door before retreating suddenly into heaven.
No one was injured, but a lady tourist was struck in the back by a large piece of glass. She was delighted, and rushed up to her husband with shining eyes to tell him the glad news. It was the only thing that happened to her since leaving Oklahoma.
Now the point of this long dull story is that what this town needs most is a good, preferably permanent, at least five-foot CYCLONE.
Drought Broken - For 10 Minutes!
Several months of painful devastating drought was broken yesterday afternoon with a brisk shower. It lasted only about ten minutes, but the fact remains that it rained; and old timers say that more is sure to follow.
Mr. Monty Weekley, son of Mrs. D.H. Lawrence; and Mr. & Mrs. Henry Simon were the most distinguished visitors in town this week.
Crime
A little misunderstanding which, according to our reckoning, should have happened in February, occurred last week instead: At Ranchitos, Fares Martinez shot Telesfor Quintana in a boundary dispute involving the ownership of a certain tree. Quintana was wounded in the leg and is still in the hospital; Martinez has been released on bail.
Shot in the Dark Wounds Three
As a result of his front page editorial-sermon-warning (or whatever-it-was) last week, the editor received three letters in which each correspondent defended himself from charges that were definitely and purposefully unspecific. Apparently the shoe was Taos-size, and at least three people put it back on & wore it, even though it hurt.
Murder & Suicide at Lama Thursday
John d. Ortega shot first his daughter, Mrs. Orlando Padilla, 18 year old bride, & then shot himself, at LaLama near Questa, early Thursday morning, March 16, 1939.
Strange Death of Dorothy Shreeves to be Investigated by State Police
Dorothy Cummings Shreeves died at her home early Tuesday morning, presumably from exposure, undernourishment and alcoholism. Local authorities admit that her body was bruised, probably from a fall, but deny the implication that she had met with foul play, and emphatically condemn the sinister and persistent rumours which are prevalent, as to mysterious circumstances surrounding her death. However, it was learned here today that the State Police have been asked to make a thorough investigation.
Funeral services for Mrs. Shreeves were held Wednesday afternoon & Interment was made in Kit Carson Cemetery.
Park Yer Carcass
State Policeman Jim Allen yesterday requested some gypsies, up the canyon to please park off the highway. A few moments later, he learned that they had done so --- completely up-side down on a fence.
Huntley Chapin is here for a few days; his first visit in years.
Terrence Golden is home for the holidays.
So is Bud Sahd.
Two local amateur painters are planning to spend next summer studying & painting in Taos.
Dorothy Brett has moved up to her Mount Lobo retreat for the summer.
Nazi Aeroplane seen Near Taos
Bringing the European war scare surprisingly close to home, was the report of three local men early this week, who declared they had seen a German Junker flying south along the Rio Grande at dusk Sunday evening. The men were Irving Kronquist, Orville Shreeves, & Archie Medows. They said that through field-glasses they had plainly seen Swastikas on both wings of the plane. A report was made to the justice department.
Expensive Bat
Pat Romero, from the sawmill up Taos Canyon, was up before the Judge on Wednesday, on a charge of drunken driving. He was fined $100, but a 60-day jail sentence and the revocation of his driving license were suspended.
Conrad – Conrad – Conrad
Dorothy M. Conrad and Vern E. Conrad were re-married the other day, after having been divorced exactly a month.
Dawn Boy
A boy-baby was born to Ralph & Rowena Meyers early last Friday morning. They haven’t yet decided to name the child, although an Indian friend has christened it “Dawn Boy”.
Transportation
No one seemed to know exactly why, but no mail arrived in Taos Wednesday of this week, from either north, south, east or west. Maybe we were completely surrounded by lakes of mud and didn’t know it – or did we?
WARNING
This is just to let you know that as soon as the snow melts, we’re going to start in all over again on the tin can (trash) situation: a SPRING HOUSE CLEANING campaign!
Probably the most effective method for getting action, would be for Taos Artists to start a campaign to:
Save our picturesque dump; it brings tourists!
“There Ought to be a Law”
We have insisted solemnly that “there ought to be a law” concerning a thorough (tin can) clean-up and strict prevention in future of trash disposal at random over the entire landscape…etc., etc.
Missed Church whips up Visitor
A woman stormed into the Taos Police station demanding to know where the San Francisco Mission Church had been moved to. When told it was still located in the village of Ranchos de Taos she left to the station to see for herself.

In other news
There is a petition circulating that Taos is too Dark!

Also, there is a new town ordinance that all doors must be painted brown. The owners of homes with Blue doors will be fined by the local sheriff a fee of $3.00


Big Business
We are told that two business women were overheard, a day or so ago, discussing the February slump. One of them said that she had taken in but 10 cents during the day! But the other one capped even that record. “The only thing I sold today,” she said sadly, “Was one copy of that darn Horse Fly! (5 cents)”
$.10 Reward!
Frances Quarles has an exhibitionistic mouse which insists on disporting itself in her show-window and eating her rabbits’ feet. Traps and poison it scorns, so she is now offering a reward for its capture, dead or alive.
Pet Goat Found News of the missing pet goat has reached our office, we are told that a certain Mrs. Barton has indeed found the goat. It seems Mrs. Barton too has children that have now fallen in love with said goat. The Barton Family is offering the Saddlers the sum of $6. if they would be allowed to keep the pet.
Spring is Here !
Say the little white lambs (probably snow tomorrow)
Next Week: A nice fresh SCANDAL! 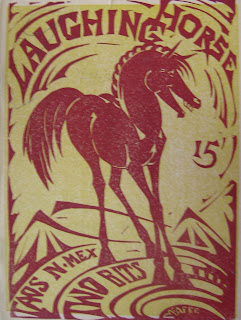