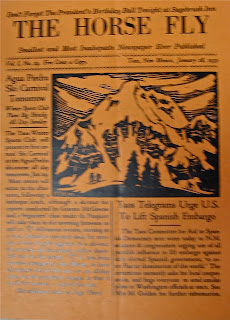 Woman Shoots Self
Una Jeffers wife of Robinson Jeffers accidentally shot herself in the side July 9, 1938. While cleaning a .38 caliber pistol in her room at the home of Mabel Dodge Luhan where she and her husband have been guests for the past month.
She was rushed to the Holy Cross Hospital immediately and is still receiving medical care there although apparently out of danger except from possible infection.
Mr, & Mrs. Jeffers & their twin sons were planning to do some target practice in the hills back of the Luhan house and Mrs. Jeffers was cleaning the ‘empty’ gun when the accident occurred.
Accident victim to leave hospital July 16, 1938
Mrs. Robinson Jeffers, who has been under treatment at the Holy Cross Hospital all week as a result of a gun-shot wound in her left side, self inflicted while cleaning a pistol last Saturday night, is reported much improved. She expects to leave the hospital tomorrow.
Ernest Knee was in town for a few hours on Thursday.
Mrs. Mabel Dodge Luhan, taking a tip from a lad named Tom Sawyer, expert white-washer, has ‘entertained’ every afternoon for the past week with ‘corn-husking-bees’ in the field between the Big House and the cottages.
It has been a pretty site: the circles of gaily-garbed artists & writers, Indians & Spanish folk, sitting on the ground among the yellow stalks, stripping the colored corn…
‘Art Doesn’t Pay!’ Poor Hubby Cries, As Wifey’s Picture Blacks Both Eyes!
“I suppose I’ll have to let my wife go on painting pictures,” said Skeezix Rodriguez ruefully on Monday morning, “but after this, I’ll hang them!”
At Four o’clock that morning, he had been awakened by a terrific blow on his left temple, which simultaneously knocked him out cold for several minutes. When he came to, he was covered in glass and blood, laid out in a picture frame, and covered with a winding sheet consisting of a huge watercolor painting. “It’s the result of this devilish spring house cleaning!” he groaned, as the doctor sewed him up.
Serious as the accident was within a quarter inch of his eye – it promises to become the classic Taos excuse for a shiner: “Well, you see, my wife hung a picture right over the bed; and darned if it didn’t fall down in the middle of the night & hit me square in the eye!”
Wife Beater Gets Long Year’s Rest
Only crime of the week in this vicinity, was that of Samuel Romero from Penasco. He beat his wife.
Arraigned before District Court, and asked why he did it, Romero explained simply, that he had to do it because his wife wouldn’t mind him.
Judge Taylor understood perfectly and gave the wife-beater a one-to-two year vacation in the State Penetentiary. Sheriff Malaquias Martinez escorted him there this afternoon.


One-Legged man WANTED by Taos Police
The Taos Police department have asked us to report that a leg was found in the cemetery in Kit Carson Park. The single limb was still wearing a pant leg of corduroy when it was found by 2 local youths in the park.
A night blooming cereus is blooming these nights at the Harwood Residence, according to Mrs. Cochran.
Or, beat the crowds and visit the night blooming cereus at the Sagebrush Hotel!
Dropped Gun Plugs Indian
Pete Martinez, Taos Indian, got a .22 bullet lodged in his right femur the other day, when an unexpected jack rabbit caused his horse to shy, and his rifle to fall from its holster and discharge when it hit the ground.
When the accident occurred, he was luckily accompanied by a friend who was able to get him to the hospital. The bullet was removed and Martinez is recovering.


In the Pen
It is with careful warning for your own safety that we wish to remind you that "The Foxes are guarding, the Hen house".
Week-End Visitors
“Sixty six Octane” Phillips & “Pawnee Bill” Lily, are the most notable visitors in Taos this weekend. Sagebrush Inn is entertaining Phillips, and Lily is staying at the Travelers Hotel as usual.
Mystery Canyon Suggests Weird & Horrid Rites to Lone Rider
Early Thursday morning, Westcott Burgess was riding alone in a blind canyon off Pot Creek, when he suddenly came upon five oddly disposed corpses which gave him a turn from which he has not yet recovered.
And yet the cadavers were nothing more startling than: 1. A White Hen with it’s feet tied securely together and wedged into the crotch of a tree. 2, 3, & 4. A Magpie, A Turkey, and A Black Crow, all intact and laid out carefully on the ground, not crumpled in a normal death position. 5. The decapitated head of a white horse, also intact, the body nowhere to be found in the vicinity. All of these mysterious corpses within a twenty foot circle, and the strange death canyon itself many miles from the nearest human habitation…
Witchcraft?? Black Magic?? Horrid, perverted, sacrificial rites?
Mere chance? Or What?
These are some of the questions Burgess is asking.
Can You Answer?
Old Crow
It was reported by many locals that a black bird flew into the window of the Harwood Foundation. There were conflicting reports as to the reason.


Bill McGregor has been a Taos visitor during the past few days.
Mr. & Mrs. Andrew Braun will return to Taos in May.
Clinton King is a Taos visitor this week-end, from Santa Fe.
Mr. & Mrs. A.B. King are here for their annual visit at Sagebrush Inn. Formerly of Savannah, GA., the kings are now moving to San Francisco, but may later settle in Taos.
Katy Skeele, Californian, is here again for a two month visit.
The Snyder's will return to Taos after the Presidential elections of November.
Pablo Martinez is in the jug, charged with drunkenness.
The Countess Virgilio Visits Taos Incognito
Countess Virgilio, American wife of once famous left-hand man of Benito Mussolini, was a visitor the past week, motoring here from Dallas with Mrs. Swaine & Mrs. W.W. Browning and family.
Red Flags of Warning June 3, 1939
Will someone please tell us where the new road in Ranchos de Taos; which of the previously discussed routes has been decided upon; or whether a brand new plan has been evolved for avoiding or spoiling or neighboring village?
A new set of red marker-flags has appeared between Sagebrush Inn & the Highway No. 3 turn-off, which seems to indicate, by amateur reckoning, that some fine morning soon, we’ll all wake up to find that the Ranchos Church has been demolished and that a broad and elegant military highway has been built straight across it’s ancient site, leaving behind only a newly painted board bearing the inscription: “Here lies the dust of the old Ranchos de Taos Mission, once upon a time the most beautiful building in the Valley, & one of the finest examples of Spanish Colonial architecture in the state. Photographs of this famous structure at curio shops, & 533 paintings of it by 254 Taos artists, are permanently exhibited in the new wing of the Harwood Foundation.”
Mrs. Myra Kingsley, famed New York astrologress and horoscopist, was to have been the guest of Mrs. Mabel Dodge Luhan this week, but she got lost en route.
Ranchos Road
More bad luck: just as our last week’s editorial was beginning to work, and a group of artists were all set for the Fight To Save Ranchos, along comes the Highway Department & admits that they’ve already saved it. The Scoundrels!
Jimmy & Mary Valentine bought a house in Ranchos this week, and moved into it at once. Just like that.
That New Highway
Our new district highway engineer, Guy Mayes, escorted Mayor Muller of Taos, Mayor Gusdorf of Prado, & Mayor Johnson of Placita, on an official tour of inspection of the new $200,000. Highway between Pilar and Ranchos, early this week.
They report that with the exception of a few gaps, (a mere mountain here and a canyon there) the project is nearing completion, and will be open for traffic January 1, 1939.
Of course they returned crammed with lovely statistics, such as: “$100,000. Worth of equipment… 9 carloads of culverts… flumes large enough to drive a car through… no grade on the entire road more than 6 per cent… shortens the trip to Santa Fe a half hour.”
But in spite of this, they were able to observe the minor fact that the new highway is also beautiful; & that our precious thrill of the first glimpse of Taos Mountain, is not lost in the new approach, but is enhanced by an even broader, more magnificent stretch of landscape, which includes the great black gaping crack of the Rio Grande Canyon, gashing the tawny desert, and making a deeper, more dramatic contrast to the snowy heights of the Sangre de Cristo Peaks.
Moon Shine
This reporter asks that readers please be aware that Taos White Lightning is now being served in several local establishments. If any of our dear readers notice the serving of this local moon shine you are asked to please report which establishments are now serving this elicit elixir.


Recent Testimonial:
“That ‘inadequate’ sheet of yours has accomplished the impossible: it has made the weeks seem longer; it has made time fly by more slowly for me as I wait impatiently for each new arrival.” California Subscriber
Meantime, life in the village went on much the same as ever… 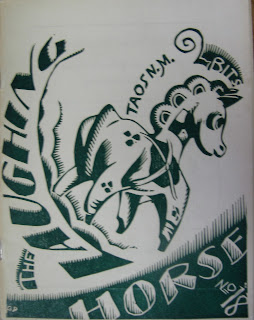