It’s not often that the paintings of Georgia O’Keeffe turn up on exhibit to the public in the UK. Currently there are over 100 paintings in the exhibition “Georgia O’Keeffe” at Tate Modern, London, July 6-October 30, 2016. There had been no O’Keeffe paintings owned by or on public display in any of the museums in Great Britain, until now.

Georgia O’Keeffe has become iconic (including her persona), synonymous as the most recognizable woman artist in the world, mostly due to the ‘flower’ paintings and their perceived eroticism. Lately more women artists are being brought to the attention of the public. Yet, most people are unable to name more than five well-known women artists. Taos should be proud of the fact that it has been a particularly nurturing, accepting place for many women artists throughout the years.

Here in London there’s no question that “Jimson Weed” (1932) is the star of the entire exhibition: graphic, recognizable and everything anyone wants and knows about an ‘O’Keeffe’. Not to be overshadowed by the flower paintings, O’Keeffe’s iconic imagery stands out here including the bone/skull paintings, the landscapes/Pedernal, clouds/rivers, and adobe walls/Churches.

This exhibition fills thirteen rooms, laid out by themes such as ‘Taos & Alcalde’, ‘Lake George’ and ‘Ghost Ranch’. Galleries are absolutely full, every room containing at least three outstanding masterworks by O’Keeffe. The curators also included many of the photographs taken of O’Keeffe through her 98 years and what she was exposed to. Display cases full of books featuring monographs and biographies expand on all things O’Keeffe. Included in this library it was nice to see the Mabel Dodge Luhan books Edge of Taos Desert and Winter in Taos. Half way through the New Mexico section you’re greeted by the Ansel Adams photograph “Man of Taos, Tony Lujan” (1929). This room, the largest space, features the best of the Taos paintings, “Ranchos Church, New Mexico” (1930),  “Taos Pueblo” (1930) and “Black Cross with Stars and Blue” (1929).

Those of us living within a 100 mile radius of the Georgia O’Keeffe Museum in Santa Fe have seen variations of themed exhibitions featuring O’Keeffe’s work for almost 20 years. The survey in London is quite like visiting a sampling of each of those past exhibitions in Santa Fe. Some of my personal favorites through the years have been “Georgia O’Keeffe and Ansel Adams: Natural Affinities” (2008) which included the paintings and photographs of the San Francisco de Asis Church, and “New Mexico: a Sense of Place” (2004), the timeless landscape paintings paired with contemporary photographs of the places she made paintings of, and “New Mexico Architecture, Katsinam and the Land” (2012) an exhibit featuring the Katsinam doll paintings. The absolute best pieces from those exhibitions are all here.

Was it worth the trip to see more O’Keeffe paintings? After all there is nothing new here, these are the same paintings you’ll see again and again in Santa Fe. My expectation was to walk into the exhibit and have my breath taken away as it had been almost 20 years ago when first stepping into the newly opened O’Keeffe Museum. Here, in London, that was indeed the result. Breathe deeply, don’t get overly excited, take it in a bit at a time. As per my usual mode when visiting “blockbuster” exhibitions, go back and see it all over again. The paintings here glow with new awareness, in a different light far removed from the regions they were once created in.

Some thoughts on what stood out here and what I feel I’ve learned.

Lyricism and a type of movement show up in much of the work. The sharp edged abstracts and the flowing abstracts (which to me are much more erotic than the flower paintings could ever be), the rolling undulating hills of the southwest, tree branches reaching out like the rhythm of an orchestra being conducted by the maestro. There’s the swirling nebulous “A Celebration” (1924) all in blue and soft light early on in the exhibition. Compare this to “Sky Above the Clouds III” (1963), the final painting in the exhibition. These are two very different ‘cloud’ paintings stylistically, each reflecting variations of a musical sensibility.

Another noticeable aspect here is her choice of format using a tall slender vertical canvas. The most obvious of which are the NYC skyscraper paintings enclosed into narrow tall spaces. Perhaps a challenge to herself, “The Eggplant” (1924) puts a roundish object in a long tall space rather than a more enclosed rectangle. “Deer Horns” (1938) tall and narrow, claustrophobically enclosing antler prongs in a confined space forcing them to create movement. Whereas the rectangular version “From the Faraway Nearby” (1937) gives those same antlers room to relax and spread out in an expansive landscape. Over and over again, the curators have placed a variety of these tall format works among the horizontal shaped paintings adding a different element to the exhibition.

“Georgia O’Keeffe” at Tate Modern seems to be giving European tourists another reason to visit Taos and the region. Here in London, a long way from home, I am grateful and proud to feel the presence of Taos. 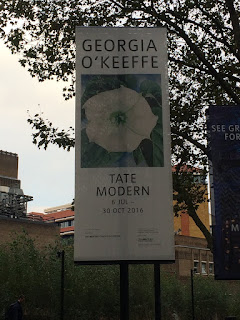 Would the O’Keeffe London exhibition expose more visitors to her work, yes, very much so. Will they get a sense of the Southwest where she worked, Taos as a part of that, I truly hope so.

O’Keeffe tends to be one of the few Female artists that most people can name, she and her work are iconic. Finally more and more women artists are being recognized across the world as the very fine artists they are. In Taos we have been fortunate that this place has been receptive to many.

The Tate Modern people were terrific to me. They had visited Taos in the Spring, and requested to come up to the D.H. Lawrence Ranch, of which I am president (D.H. Lawrence Ranch Alliance) and a docent for visitors to the Ranch. I'd been asked to give them tours of the ranch including writers and the BBC filmmakers. In reciprocation they provided passes for myself and family to view the exhibit, (I went twice). The curators were also kind enough to gift me with a copy of the exhibition catalogue. 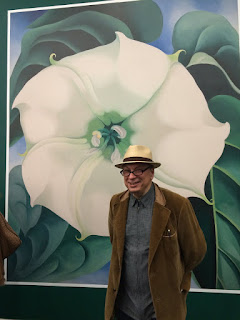 Self Portrait at Tate Modern lobby with Jimson Weed 'poster'


The Taos News does not keep articles available online after 2 years, in which case I have provided the entire article in this post.
http://www.taosnews.com/entertainment/o-keeffe-at-tate-modern-a-taose-o-s-perspective/article_c99c1ba8-9797-11e6-8a87-53045b742d78.html


Included here are a few photographs of O'Keeffe paintings I've been fortunate to see in museums across the USA this past year. 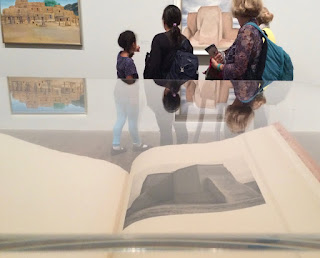 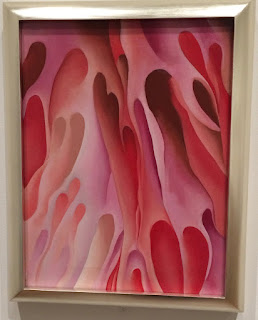 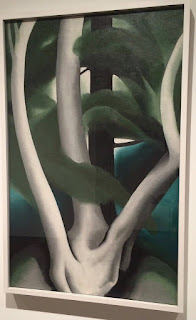 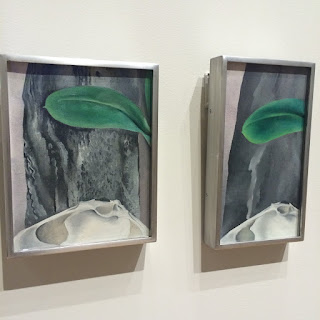 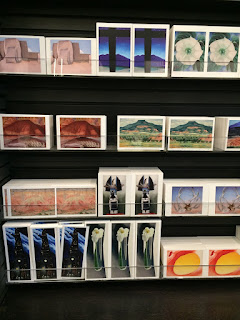 Postcards for sale at Tate Modern