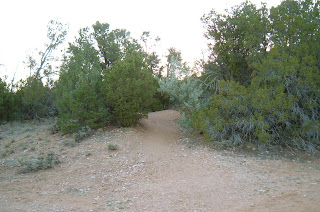 June 24, 2011 the Nativity of John the Baptist was celebrated here in Ranchos de Taos today at daybreak with a blessing of the 'Ponce de Leon' Hot Springs in LLano Quemado.
Not very far from Two Graces Plaza Gallery here in Ranchos.
Heading south from the San Francisco de Asis Church Plaza you'll soon take a left turn onto State Road 382/the Hot Springs Road, cross over the Olde Santa Fe Trail Road and continue up the hill past the Capilla of La Capilla de Nuestra Senora del Carmen, continue down the road which eventually changes from paved to dirt at the intersection of Leyba & Vista del Valle, on past the Llano Community Center & Water association buildings. This road eventually takes an extreme sharp left turn park at the turn around at this corner.
Walk around the gate, stay on the dirt road and keep walking, this road will eventually horseshoe turn back keep following it until you notice this break in the trees to the right which takes you to the springs. As I came around the turn a rabbit hopped along ahead of me, a nice sign of John the Baptist in attendance this morning. There is a shortcut across the horseshoe, which is under the water sluice cutting across the depression not quite an arroyo, not recommended to newcomers.
Taking to the path on a cool morning such as this the air suddenly intensifies to a warmth as if you'd just entered your own home. Perhaps this isn't a normal experience but this is what I felt. 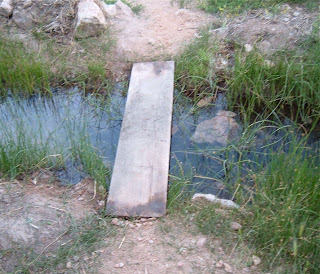 You'll cross over a stream of water which is coming from the springs. 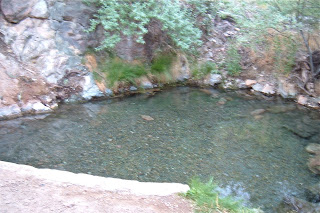 There are 5 pools of water, the first of which is currently overgrown with cattails, the next is large enough to swim in with two smaller 'soaking' pools attached to it. Then there is the warm natural spring up against the mountain the bottom of which is covered in smooth stones, with a tree growing out of the rock above.
WARNING: do not drink the water from this spring, the microorganism Giardia is here making it unsafe for human consumption. 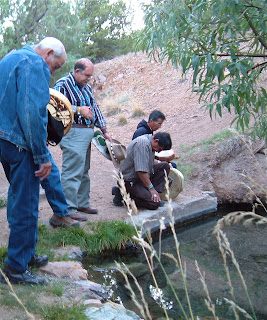 And so the Blessing began with Father Deano the new priest of San Francisco de Asis Church saying a prayer with the group known as Los Comanches in attendance. 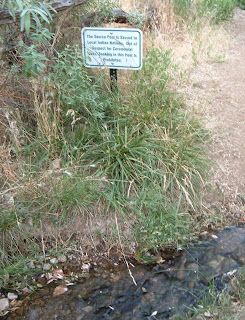 After a great deal of controversy and turmoil over who would control this spring it is currently owned by Taos Land Trust, which respects the right for Native People to hold Sacred Blessings of their own there. This spring is located on the trade route between Picuris Pueblo and Taos Pueblo, it has been a sacred site for as long as people have been in the area. TLT has now posted signage to remind people of just what a Sacred Place this is and to show respect to those who worship here. I give a strong warning here to all who come to this spring to PLEASE pick up after yourselves and keep noise levels to a minimum.
Shamefully this morning there was far too much trash all around. 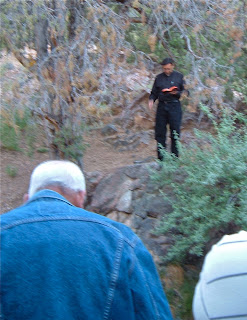 Father Deano giving Blessings to the spring and the people, flora and fauna for which it provides. A very fitting prayer for all.
A few years back a white Cross was painted onto the rock face under the bush to the far side. 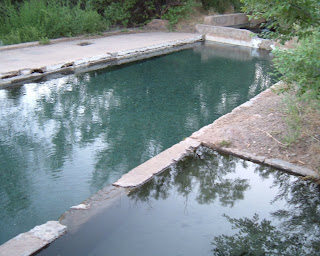 The great concrete pool is large enough to swim in.
I've brought people and sent people here from near and far, everyone of them has understood the value of this experience, there are many Hot Springs in the world, this one is quite special. 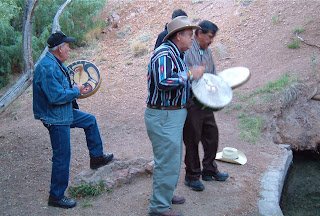 Los Comanches as they drum sounding loud and clear. One drum has a Northwest Coast design, one an elk and the other with an antelope painted onto the top. There were about 8 attending all around the sacred pool they drummed in rhythm with one another. Afterward each man dipped his hands into the water to cleanse their foreheads, I did so as well. 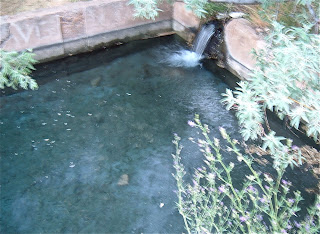 There is a great deal of water coming out of this mountain, part of the Picuris mountain range of the Sangre de Cristo section of our great Rocky Mountains.
It's said that on this day to be cleansed by fast rushing water you will be blessed for the year to come.
As we left the springs walking out of the trees onto the dirt road I once again felt the warm air from the Hot Springs fall away behind me as the cool morning air awaited just outside the break in the path to this Sacred Site.
Thank you to Taos Land Trust, Taos Pueblo & Picuris Pueblo for sharing this place and keeping it open to the public who may enjoy and respect this beautiful place.
This just happened last night at Taos Pueblo PowWow:

WHEREAS       the springs in Llano Quemado, known as The Ponce de Leon Hot Springs, have been a scared site since time immemorial for Native People, and
WHEREAS       the springs, with 95-degree groundwater pools, were a popular resting spot along the Camino Real and a community gathering spot throughout the centuries, and
WHEREAS       the springs, like many ancient, special land parcels in Taos, have seen ownership, preservation and issues of public access wrestled with throughout the decades, and
WHEREAS       this 45-acre parcel, through the coming together of the Taos Land Trust and Taos Pueblo, has found a steward in Taos Pueblo, and
WHEREAS       through this stewardship appropriate access and a conservation easement to eliminate development have been preserved and will match the wishes of the $500,000
anonymous, private donation that enabled this exceptional stewardship, and
WHEREAS       we have all come together today to celebrate this stewardship of the Ponce de Leon Hot Springs by Taos Pueblo,
NOW THEREFORE, I Darren Cordova, MAYOR OF TAOS, do hereby proclaim July 14, 2012 as
“PONCE DE LEON HOT SPRINGS DAY”
In honor of this significant day in the history of Taos, New Mexico, and to pay tribute and honor both the Taos Land Trust and Taos Pueblo for this valuable action that directly contributes to our community and its future.