Two Graces Plaza Gallery acquired this unique Hopi Pueblo Pottery piece by Otellie Loloma from the estate of Navajo artist and supporter of southwest regional artists, R.C. Gorman. The pot is embellished with face masks of the Long Beard Kachina in profile around the entire circumference to the piece. The pottery is enhanced with a woven handle of willow which includes bits of Coral beads. The pot height not including the handle is 6” the width of the mouth of the pot is 4”. Ottellie’s familiar signature ‘O Loloma’ on the bottom of the pot is strong and bold. Estimate of a date on this piece would be circa early 1980, it is believed that Mr. Gorman would have purchased this directly from Otellie at that time period. This is a unique and rare Otellie Loloma pot. 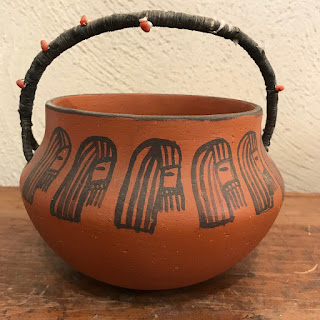 “When I start making a piece of pottery or a ceramic sculpture, I begin with an idea drawn from Hopi life and legends. As the piece progresses, the idea becomes part of the clay, subordinated to the overall design. In the finished piece the symbols may not be obvious, but they are there. They are like the seed; they have given their strength to make the plant grow.” a quote by Otellie Loloma, ‘Art and Indian Indiviualists’, Guy & Doris Montana 1975 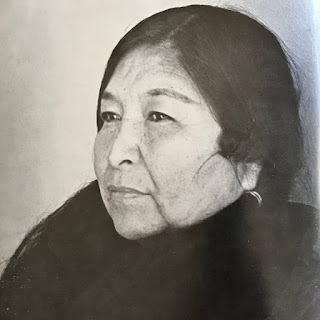 In 1945 Otellie Loloma received a scholarship to Alfred University, New York, where she began her  studies over a 3 years time period. There she met Charles Loloma whom she married in 1947. After this she returned to Arizona where she continued her studies at Northern Arizona University and later the College of Santa Fe, New Mexico. In Scottsdale the Lolomas opened the Kiva Craft Center where they sold art by other Native American Artists of the southwest region along with their own ceramics known as ‘Lolomaware’. In 1962 at the invitation of Lloyd Kiva New she became a faculty member of the newly formed Institute of American Indian Arts (IAIA), which she retired from in 1988. The classes she taught included Ceramics/Sculpture, Painting, Design and occasionally a Hopi Dance course. In 1968 she performed at the Olympics in Mexico City and around this time at the White House. Otellie was a beloved teacher to her students, nurturing them to bring them to their full potential. 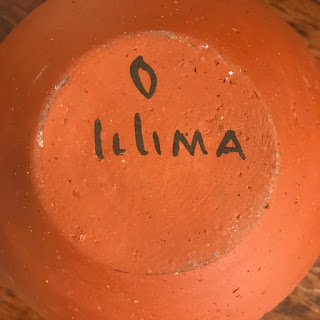 “When I teach… I try to instill belief in my students, whether Indian or Non-Indian. When that belief is alive, their work is alive… This belief and aliveness gives the students strength in what they do in any art form or life work… It is what makes me the artist I am… It is what I am all about.” Otellie Loloma interview with James McGrath for Santa Fe Reporter, 1991 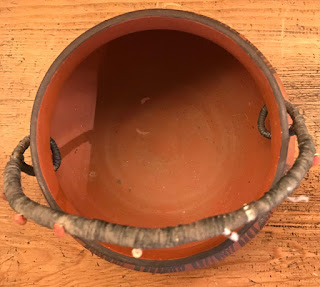 Lola Pot from above

“The subject matter is subtly Hopi. There are human female forms with characteristic maiden whorls or buns above the ears, and bowls with masks or faces, but Loloma’s manipulation of the clay is anything but Hopi. Some pieces are wheel thrown, whereas others, especially the sculptures, are constructed…  However modern the treatment of the clay, Loloma’s heritage infuses it…” Laura Graves “Native American Women: A Biographical Dictionary”

Her hands were clay.

With clay fingers,
she made portraits of her miwi,
her relatives.

With clay fingers
she made bowls for her piki,
her blue-corn paper bread.

I think of her pots,
of the fullness inside
where the treasures are held,
secure and loved in silence.

She gave me her secret,
her Hopi name, Sequafnehma.
“the place in the valley
where the squash blossoms bloom.”

With her clay fingers,
she gave me the bowl for the bear.

In the valley of my eye
I see her now,
her pollen covered face
in the chamois by the roadside,
in the last sunflower of my garden.

With her clays,
she lies under stones
near Corn Rock
and dances,
even now in winter,
with the broken brown fringes
in cornfields,
her clay fingers melting in my tears.

February 1998
Hopi Reservation, Arizona
‘At the Edgelessness of Light: Poems’ by James McGrath 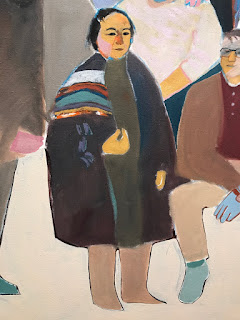 “Arts Faculty at the Institute of American Indian Arts at 4:15 pm” (1968), by Fritz Scholder. Detail of Otellie
(Courtesy of the New Mexico Museum of Art)

“It must have been fate that made me take a class taught by Otellie. It was like I returned home; clay became my expression. Otellie taught me that each pot has its own life, personality, character and form - and that is what set me free. Pottery is like people, every one is different and not perfect. I thought about this and decided it was an important idea. So I developed a new way, an unconventional way of looking at form.” Jacquie Stevens, ‘Women Artists of the American West’ 2003 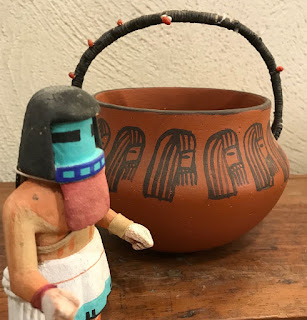 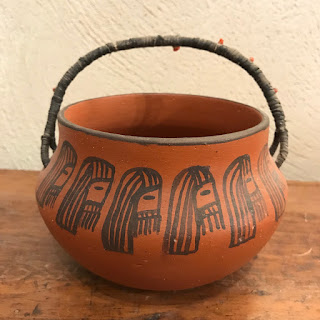 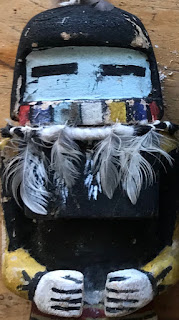 “In general and, perhaps, hopefully, it can be said that in some quarters there appears to be a growing understanding of the fact that evolving Indian styles are reflective of the changes occurring within Indian culture, itself.” Lloyd Kiva New from the foreword to ‘Art and Indian Individualists’ G & D Montana 1975

Please visit us in Taos at Two Graces. An out of town purchase can be made by phone 575-770-5580 or through our website twograces.com we will ship.

This post is dedicated to all teachers out there in the world who devote their thoughtful knowledge and love to their students.