Elizabeth Taylor & R.C. Gorman, and the Oscar goes to...

This glass statue was given to R.C. Gorman from Elizabeth Taylor.
The story goes that when Ms. Taylor received her third Academy Award in 1993 which was an honorary one from the Academy of Motion Pictures, R.C. said to her that since she had 2 already why not give him one. Well that wasn't about to happen, but to his surprise she had this glass statuette replica of an Oscar made for him, and presented it to him on her next visit to Taos.
Back in the day Elizabeth Taylor and Dennis Hopper would have crossed paths here in Taos during one of the RC salon parties. Of course they also knew each other from acting together in the 1956 film Giant, starring Taylor, James Dean & Rock Hudson.
It's said that Ms. Taylor was a great humanitarian. Being a spokesperson to help get recognition and funding for much needed AIDS research was a huge risk for someone of her caliber. She opened a lot of doors.
She saw the broader picture of how much her being a spokesperson meant to so many people. She also saw the smaller picture of how much a gift like this would mean to one of her very dear friends. 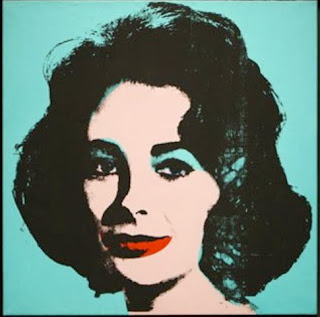 I've only very recently learned of this story and although I had posted this 'Oscar' in an earlier blog about the Gorman estate I thought it would be a nice thing to post here and now a few weeks after the death of Elizabeth Taylor. If someone is interested in purchasing this piece of memorabilia, please ask, it deserves to be displayed and in the proper collection, just ask.

*An update, the Elizabeth Taylor Foundation purchased the statuette for their collection.