American Moderns in the West 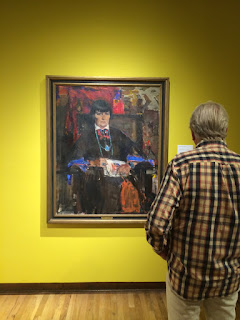 “Dear Mabel,
It is 5am…
It seems so perfect that I wonder…
Is it just a dream I make up…”
Georgia O’Keeffe

The 'Pink House' today under private ownership,
where Georgia O'Keeffe and Rebecca Strand stayed on their first trip to Taos.

This exhibition opened here in Taos the weekend of May 22, 2016 it closes on September 11, 2016 (D.H. Lawrence’s Birthday by the way), it will move on to the Albuquerque Museum and later to the Burchfeld Penney Art Center. 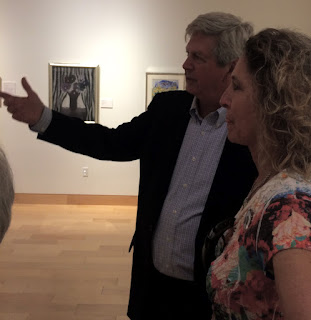 I was so excited before even seeing the exhibit, that we became members of the Harwood Museum in order to attend the Members opening. (That’s saying a lot for me, as I’d been boycotting the Museum for years due to the turmoil involved with the former Director). The Museum now has a terrific new director Richard Tobin, the staff is beside themselves happy these days and so am I, a marked difference. At this time the exhibit has been open for less than 5 weeks, I've been to see it FIVE times already (and that's with being gone from Taos for 2 of these past 5 weeks). 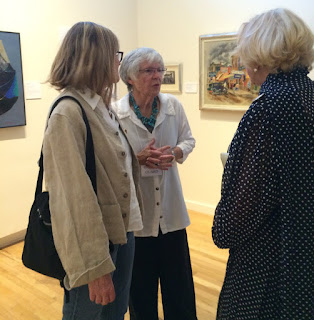 At the opening 3 of the very best people who also happen to be docents at various Museums in Taos today.
Holly Sievers, Charlene Tamayo, Lucille Greider.

“One does not get better but different and older and that is always a pleasure.”
Gertrude Stein 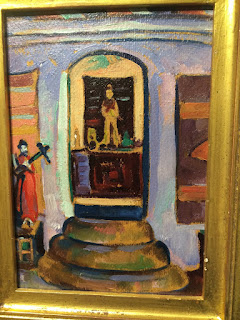 The entire Museum is dedicated to works on display for this exhibition, (the Agnes Martin room is still its own entity as well as the Ken Price room, and the new acquisitions gallery) an enormous commitment. The payoff is that it is simply the best exhibit this Museum has done and the crowds of people visiting is proof. 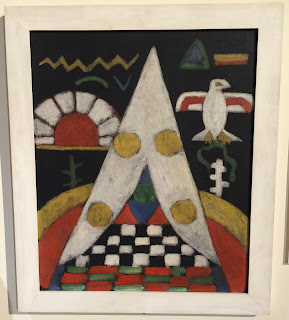 “I found out that the sunshine in New Mexico could do almost anything with one: make one well if one felt ill, or change a dark mood and lighten it. It entered into one's deepest places and melted the thick, slow densities. It made one feel good. That is, alive.”
Mabel Dodge Luhan 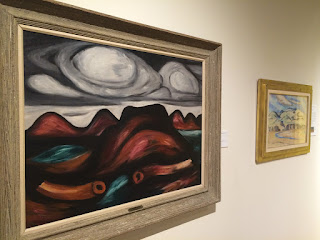 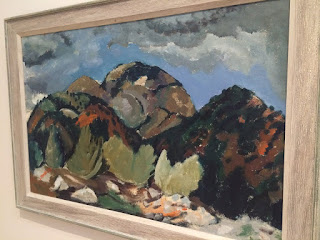 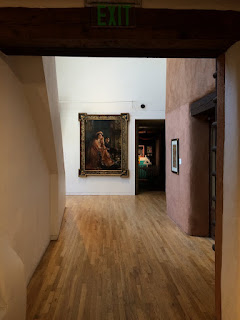 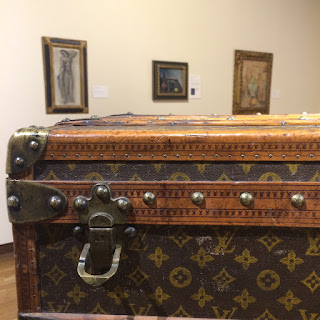 Although there is a timeline provided, Head towards the giant portrait of Mabel and son John Evans by Jacques-Emile Blanche and start in the far back gallery space at the early Marsden Hartley painting, I gasped as I entered the room (the room has an enormous Louis Vuitton suitcase in the middle of it) as you turn towards the next wall to your right there is a lovely drawing by Maurice Stern (husband #3) of Mabel herself. Maurice Stern came to Taos before Mabel, at her suggestion. I’ve not seen much of his artwork other than a few drawings, one of which is a beautiful Fawn at the Barnes Foundation in Philadelphia 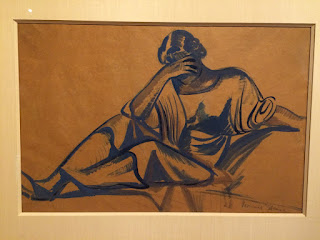 “It takes a lot of time to be a genius. You have to sit around so much doing nothing, really doing nothing.”
Gertrude Stein 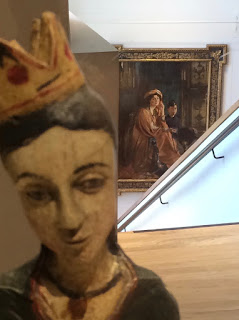 For some time now the Harwood has displayed a still life painting by Mabel, it is absent from this exhibition, I’d asked one of the curators early on if they would be showing some of her paintings, they chose not to. Personally, I’d like to see a few of her other paintings. 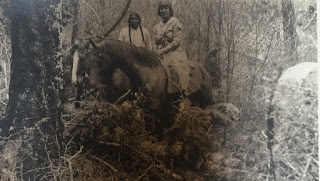 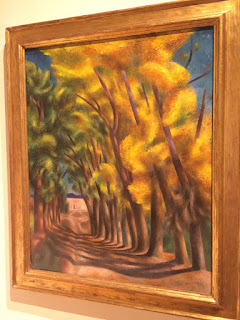 The front space gallery has a selection of Andrew Dasburg paintings, all 5 are exquisite. Recent research by the wonderful historian Liz Cunningham reveals that the “Chantet Lane” 1926 painting is of Jeantete Road. Well there was no true road signage around Taos (until the 60’s), which means if you’d only heard the name spoken you might get the spelling of it wrong. Or, did Dasburg choose to misspell the name on purpose to mislead other painters away from his site, (my speculation). Dasburg also was THE dealer of vintage 'Santos' the Bulto Carvings and Retablo Paintings of Hispanic Artists (the Barnes Foundation has one of the best collections I've seen outside New Mexico thanks to Dasburg).

Five paintings by Andrew Dasburg, to the far right is "Chantet Lane

“You've got to know yourself so you can at last be yourself.”
D. H. Lawrence

A few of the John Marin works

The Harwood’s grand gallery features the O’Keeffe’s, the John Marin’s, a pair of Diego Rivera drawings (to me looking quite out of place), and a tribute to D.H. Lawrence along with many other rich and beautiful artworks. A surprising choice to include 2 deer watercolors by Knud Merrild who Mabel truly disliked for his being a distraction to Lorenzo. I love that these paintings are included! 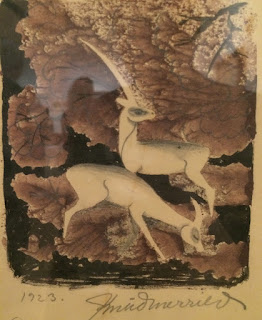 “An artist is only an ordinary man with a greater potentiality.”
D. H. Lawrence 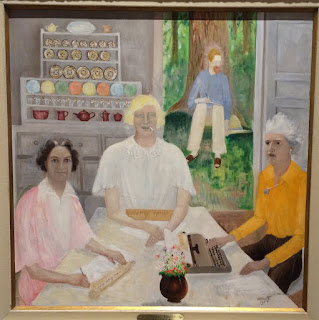 Upstairs the displays feature paintings of some of the religious items and paintings of Spirituality, Catholic/Hispanic and Pueblo ceremonies. Again some true jewels upstairs in the 2 rooms there. The Indian School paintings by various artists along with Dorothy Brett’s paintings of ceremonies are treasures to see side by side. The Hispanic Retablos (and Bultos) frame some of the works by the Taos & Santa Fe School Modernists, together complimenting each other, playing off each other, honoring each other. The exhibit gives the Honourable Dorothy Brett a nice place in this piece of the Modernist Taos Art Colony. She has been one of the most underrated of the Taos painters for many years, I hope her time is coming, soon.

“The artist's world is limitless. It can be found anywhere, far from where he lives or a few feet away. It is always on his doorstep.”
Paul Strand 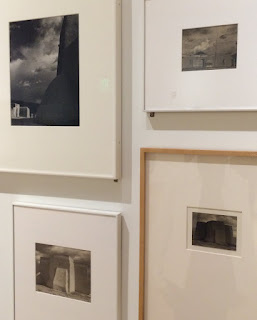 Scattered throughout the galleries are photographs by Paul Strand, Laura Gilpin, Ansel Adams, Edward Weston, Alfred Stieglitz, Carl Van Vechten, John Young-Hunter, Rose Clark, John Collier, Marjorie Content, Ernest Knee, Dorothea Lange, Sonya Noskowiak & Henri Cartier-Bresson (who am I missing?). The breathe of the photographers alone would be a masterworks exhibition in its own right! Again, I remind you, they are scattered throughout, please take the time to look.

“In wisdom gathered over time I have found that every experience is a form of exploration.”
Ansel Adams 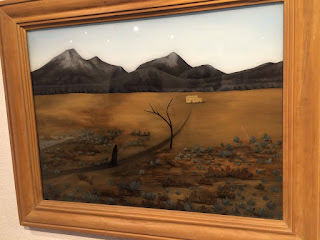 The other day I was docent at the D.H. Lawrence Ranch (I’m President of the Board of Directors for the D.H. Lawrence Ranch Alliance), a woman came up to visit. She told me she’d just been to the Harwood to see the exhibition. One of the Harwood Staff members told her that the ranch was open to the public that day (10AM- 2PM), then and there she decided to stop her viewing of the Mabel Exhibit and drive up to the ranch. I showed her around for a tour afterwards she then return to the Harwood to continue her enjoyment of the Mabel exhibition. I am in awe of how this exhibit is creating such terrific synergy all around Taos. All of the Lawrence Ranch docents mention to visitors that a visit to the Harwood is a must. 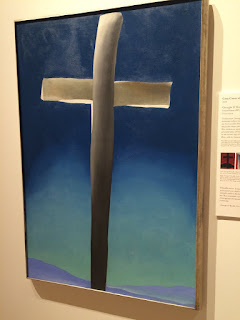 “What a life, seeing!”
John Marin 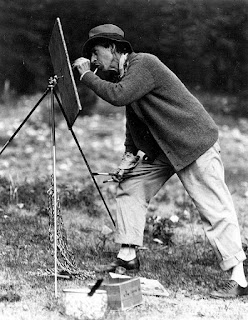 It seems of late there’s a lot of synergy around exhibition retrospectives featuring women or their circles, Agnes Martin, Georgia O’Keeffe, Women of Abstract Expressionism and here in Taos, Mabel & Co. I teasingly, lovingly say to women friends, what the heck is up with all these women overshadowing all the men lately??? Well, it’s about time. A few years ago in Taos there was a promotion of “Remarkable Women of Taos”, this may have been a prescient town wide honoring of women that got the ball rolling. 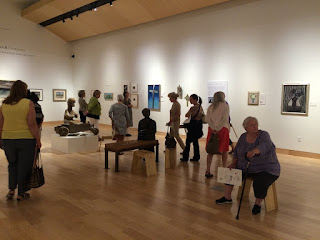 Docent tour of the exhibition

“Do what you feel in your heart to be right, for you'll be criticized anyway.”
Eleanor Roosevelt 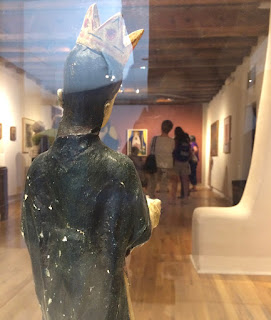 My personal sanctuaries are Museums and the forest, both are inspiring and nurturing. Visit Taos before September 11, 2016 or you’ll have missed a treasure chest of inspiration and loveliness right here in the place Mabel chose to call her home. 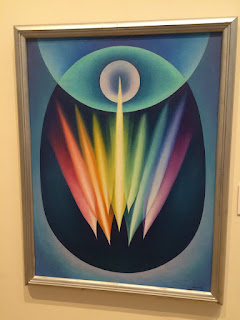 “Love art. Of all lies, it is the least untrue.”
Gustave Flaubert 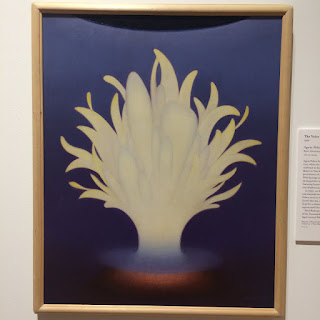 This is a very small glimpse of the exhibition which will change as other works become available and as it moves to the other 2 museums scheduled at this time. 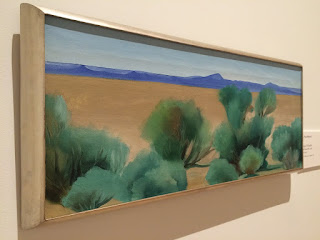 Purchase the catalogue (which I have yet to do), “Mabel Dodge Luhan and Company, Moderns in the West” in hardcover. My gratitude to the curators Lois Rudnick and Ma-lin Wilson-Powell, along with all of the staff at the Harwood Museum. You should all be quite proud of this accomplishment, congratulations. http://www.harwoodmuseum.org/exhibitions/view/147 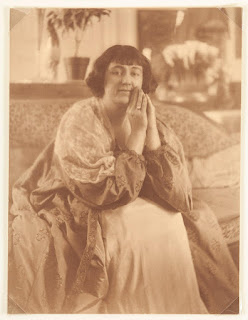