“The Sacred Site” aka the Broken Wagon Wheel Story (The Taos Society of Artists, part 1 of 6) 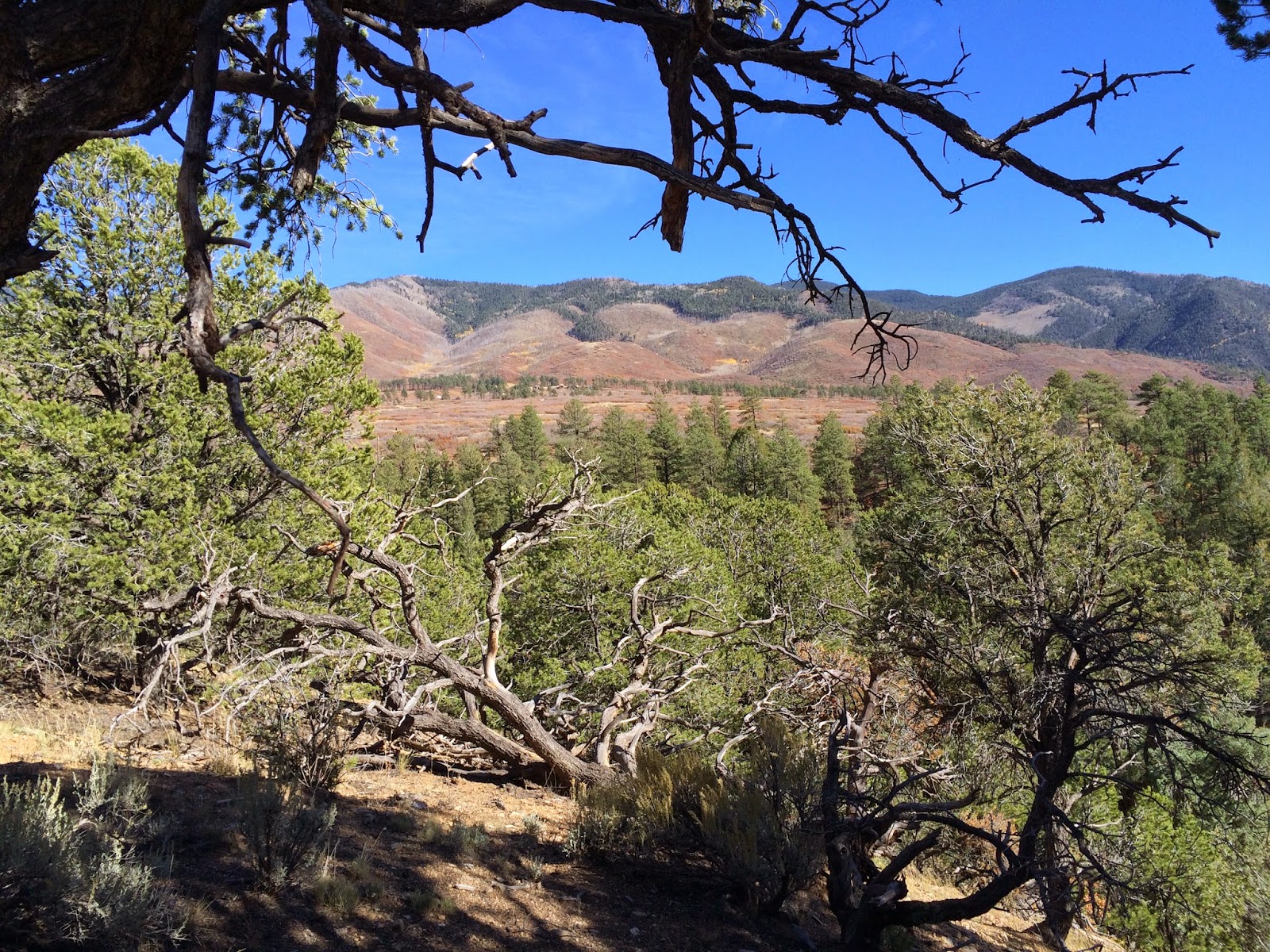 “It is high time for (the) artists to come to the Southwest”. Charles Lummis, ‘The Artists Paradise’

“The story of the founding of the Taos Art Colony is the chronicle of youthful enthusiasm, of the love of adventure of discovery. It is also the story of enduring friendships.”
Ernest Leonard Blumenschein

An art colony in Taos was the last thing any of the artists visiting and passing through Taos were expecting of their trips here. In the late 1800’s art colonies began springing up in the eastern US, with the first recorded stateside colony a plein air painting school in Magnolia, Massachusetts begun by William Morris Hunt in 1877.
It’s noted that Joseph Henry Sharp was first to visit Taos in 1893, he had come to New Mexico on a trip through Santa Fe in 1883, (it could take as many as 3 days to journey the 75 miles from Santa Fe to Taos at this time, thus he did not visit until later). During his studies in Paris he met other artists from the States, he’d tell them all about the little mountain town in the remote far north of New Mexico alongside the village of Taos Pueblo. Sharp, it could be said, was Taos’ first true one man marketing service, with his illustrations and paintings of this charming place he convinced others that Taos had (has) much to offer. Sharp and the other Taos Founders were very, very good marketers and market Taos they indeed did. 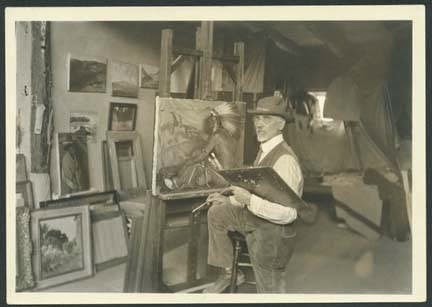 Joseph Sharp in his Taos Studio
A side note to the founders story, in 1895 Frederic Remington is known to have had a studio for a short time in Taos Plaza. Remington not being an insignificant artist of the old west I believe his being in Taos at the end of the 19th century is an important sidebar.*
The classic story of how Ernest L. Blumenschein (at 24 years old) and Bert Geer Phillips (at 30 years old) discovered (or wound up in) Taos has been oft told. Blumie was known to tell the tale over and over through the years with very little variation of the story. In a court of law he’d have made an ideal witness.
Phillips and Blumenschein studied in Paris together, later sharing a studio in New York. In 1898 they journey to the American Southwest, beginning in Denver where they purchase a wagon and gear along with a few horses. Some of the gear they had purchased the previous year in New York which had been raffled off by stranded members of the Buffalo Bill Wild West Show. Once determined to journey west Bert’s father remarked: “Geronimo is on the warpath. You will lose your scalp!”
Normally the story told is that the artists were on an illustrating trip from Colorado to Mexico sent on assignment by magazine editors, they actually came to paint. Artists are often encouraged to be illustrators in order to ‘make a living’ (in Phillips case his father had tried in vain to persuade him to become an architect). A few years previous a trip by Blumenschein was indeed to illustrate the west of Arizona and New Mexico for magazine stories. Sharp too, had been to the west and Taos to illustrate stories for newspapers and magazines. 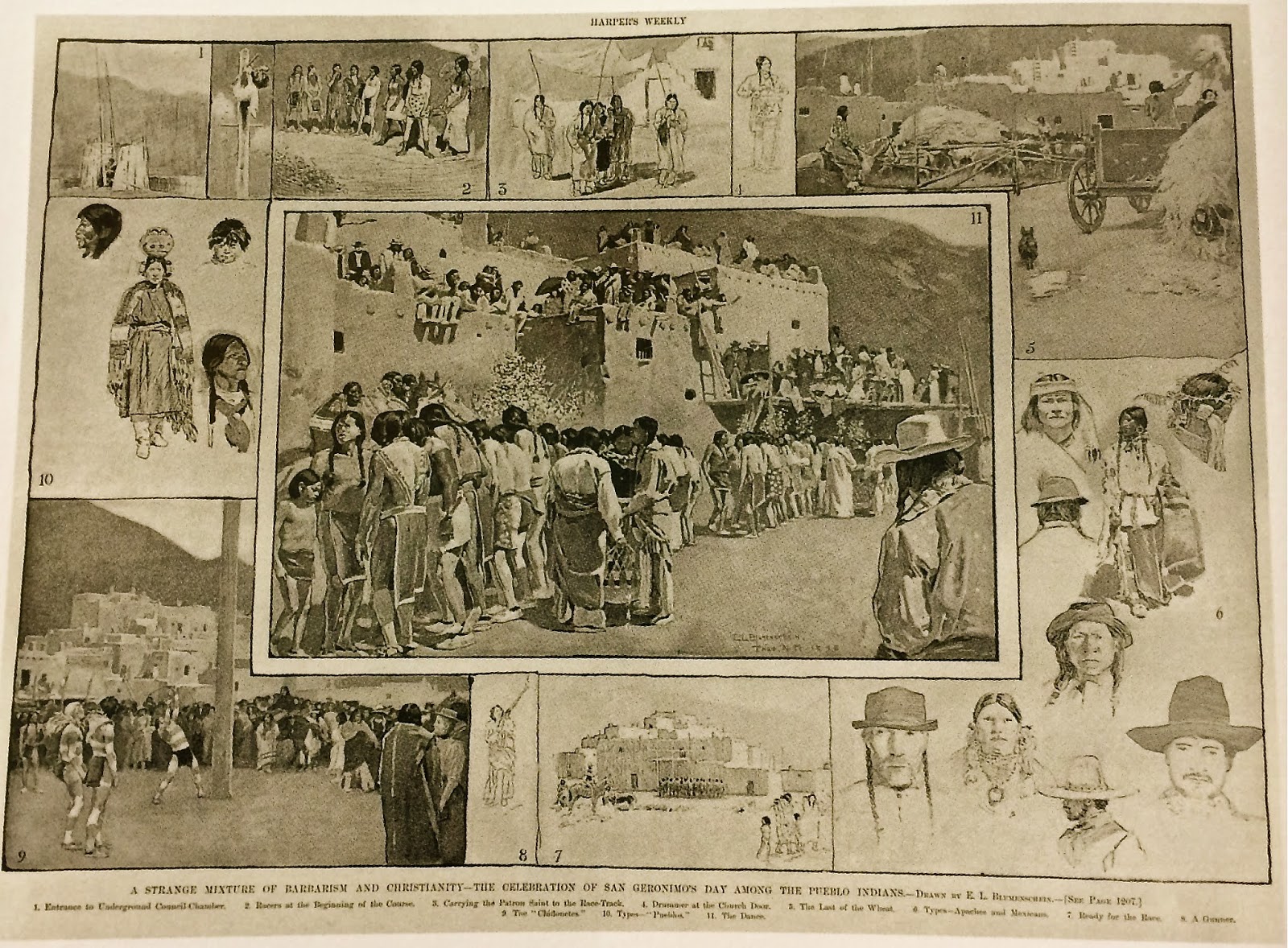 Blumenschein illustration for Harpers magazine of Taos Pueblo San Geronimo Feast Day
At the end of May 1898 they began a journey from Denver into the Rocky Mountains, each a tenderfoot with no idea how to ride a horse or hitch it to a wagon, they became quick studies in the art of pioneering. Even to the bandit groups they encountered along the way the pair looked too much like travelling vagabonds to be robbed. 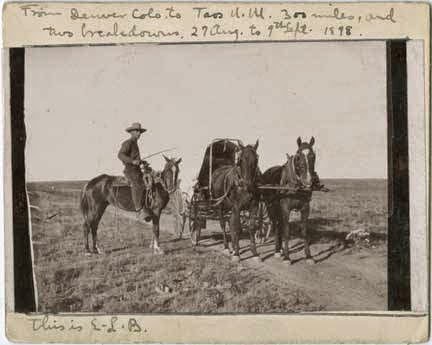 Blumy on Horseback, Bert driving the Wagon
Wagon roads were bad, heavy monsoon rains of summer had washed out the dirt trails, at one point a wagon spring broke along with other mishaps, the trip included many stops at local blacksmith shops wherever and whenever they could find one. Just north of Taos a wheel spoke broke on a mountain pass, exhausted they decided with the flip of a ($3. gold, Phillips keepsake from his father) coin, which one of them would ride into the village of Taos to have the wheel fixed. It was now September 3, 1898 when Blumenschein who lost the coin toss was on his way carrying the cumbersome wheel, shifting it in any and every position, in his lap, along side the horse and so on. 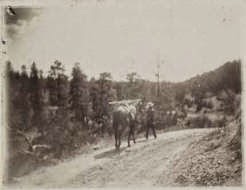 Blumenschein giving the horse a rest on the way to Taos
Arriving into Taos on the 4th at the local blacksmith shop in Taos Plaza, the wheel was gratefully fixed and brought back up the mountain on September 5 to where Phillips waited. 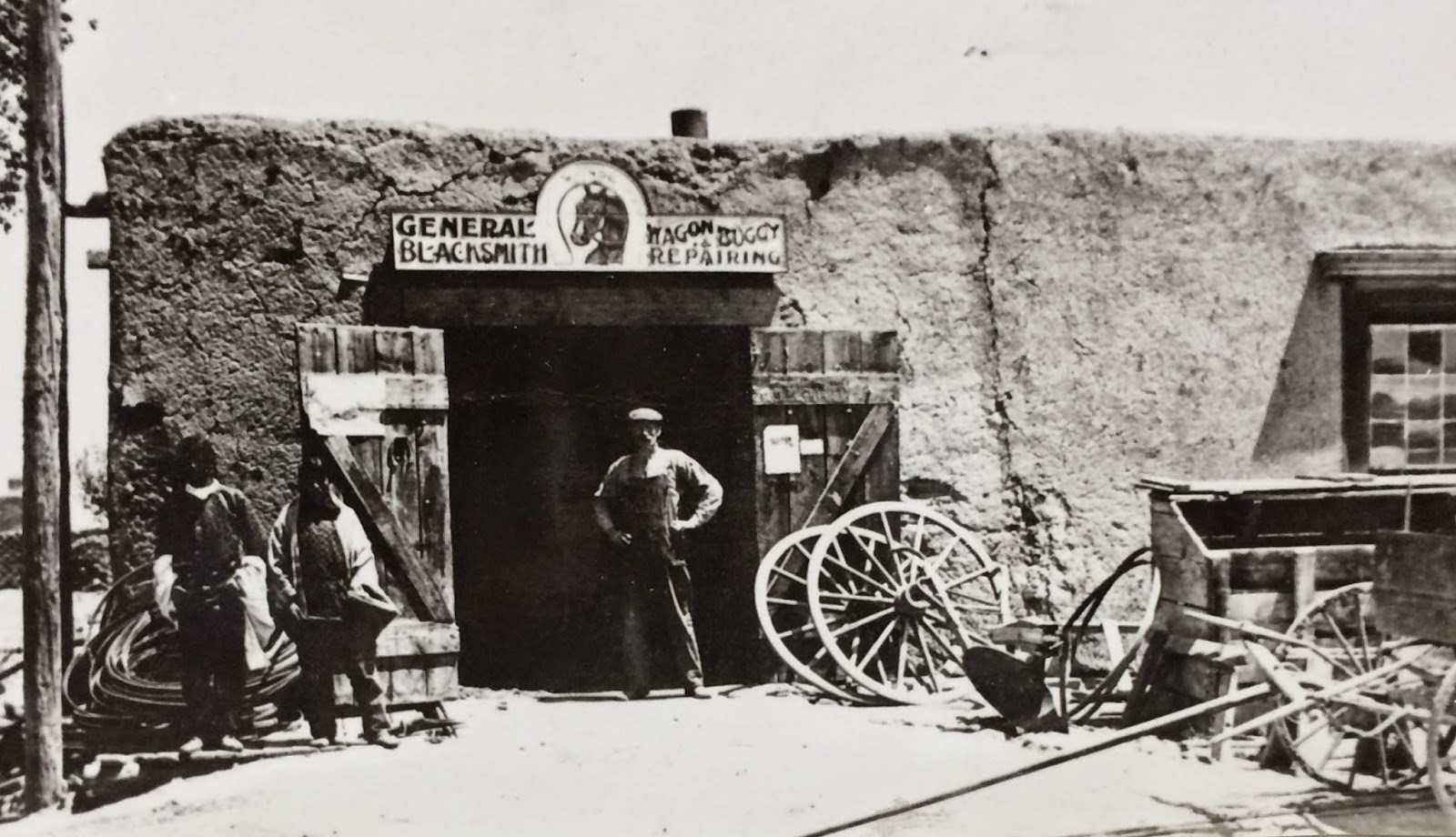 The Old Bill Hinde Blacksmith Shop
The exact location of the Blacksmith shop is at the North side of Taos Plaza on the eastern corner, marked by an iron horse-head hitching post. 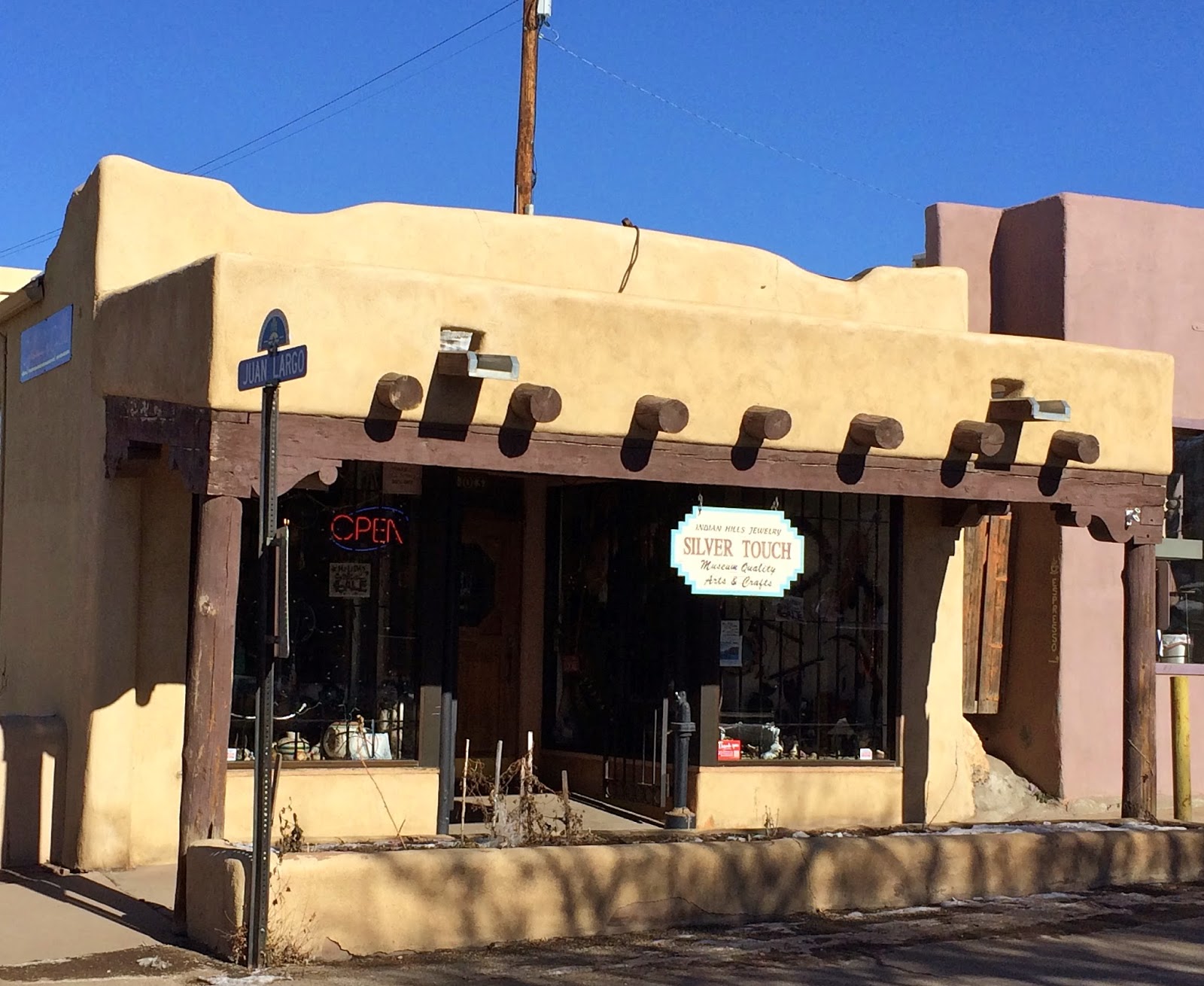 Blacksmith Shop location in Taos today.
Soon after (September 5 or 6), they together arrived in Taos. Upon their arrival they attempted to camp out at Taos Pueblo where they were quickly discouraged from doing so. Instead they decided to sell the wagon, horses and its outfit, then to rent a studio where they would paint through the Autumn months. At this time there were no other artists in Taos, yet there were tourist visitors from other parts of the country.
Soon they were invited to visit Taos Pueblo for the annual San Geronimo Feast Day held on September (29 &) 30. To some accounts witnessing the ceremony at Taos Pueblo had entranced Phillips, convincing him to stay and settle in Taos. If this weren’t enough, another enticement occurred, at a party on October 19 at Doc Martin’s home, there Phillips met the sister of the beloved doctor, Rose Martin, visiting her brother from Pennsylvania. Before the onset of Winter, Rose became Bert’s manager and encouraged Phillips to begin teaching art classes in Taos.
Due to prior commitments back in New York, Blumy left, bringing with him some of the paintings completed by Phillips. In Chicago he showed the paintings to gallerists M. O’Brien (O’Brian) and Son who purchased the entire group, beginning a much needed gallery relationship for the artist.
Phillips decided to remain in Taos, falling in love with the beauty he found here all around him, the golden yellow aspens of autumn, the winter white and shaggy animals of crisp winter days and nights by the fire, the blooming of the wild flowers of the mountains and valley each spring, and of course the beautiful Rose Martin, whom he married a year later on October 11, 1899. 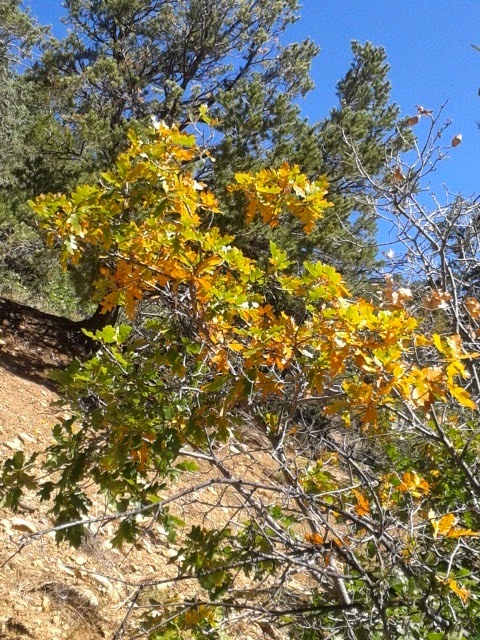 The Trailhead in the Taos mountains to the 'sacred site'
The artists engaged the people of Taos Pueblo although skeptical and fascinated, they agreed to pose for paintings. It was Phillips who impressed them the most with his very fast running skills, he was challenged to foot races, time and time again outrunning each of the fastest of the Pueblo runners.
Most of the early founders of the Taos art colony lived and painted in Taos during the summers, in winter season they spread out across the country to homes in Chicago, New York, California and St. Louis among other places. Phillips was the first of the art colony to become a permanent resident. The Phillips home still stands today directly across from the Taos Inn, it has been split up to contain four shops from the corner of Bent Street to the corner of Martyr’s Lane. 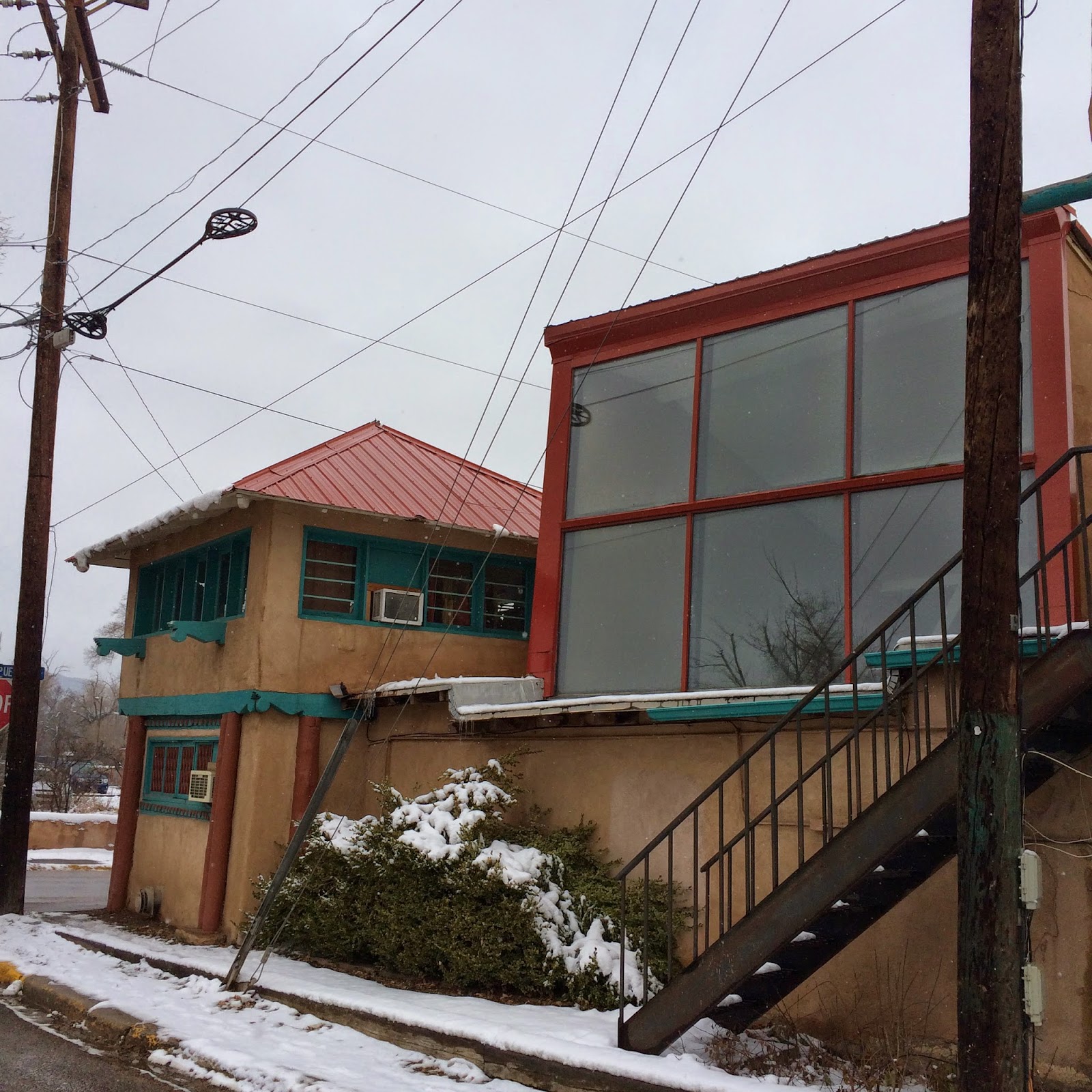 The Phillips House in Taos today.
Through a few photographs taken by Blumy and Bert at the site of the Wagon breaking down, we are able to locate what we refer to today as the ‘sacred site’. An almost long forgotten place where two artists stopped and pondered the potential of creating art in these magical mountains. 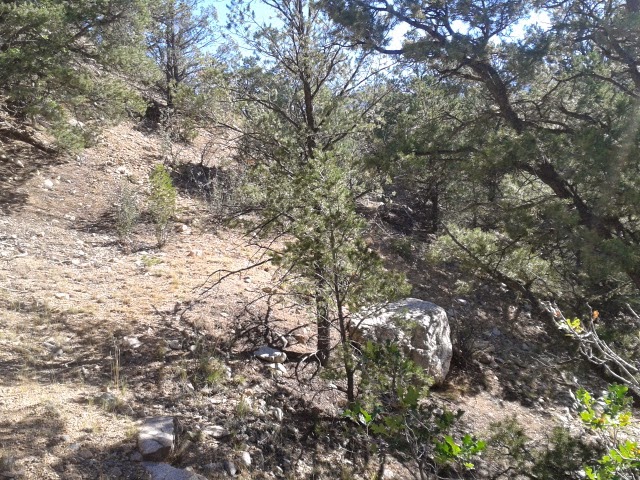 The old wagon road and rock north of Taos today
As for the location today it can be found near the Lama colony, north of Taos near the D.H. Lawrence Kiowa Ranch. The trailhead and trail are not marked and are quite rough, (especially the start) with a bit of scrambling the old road eventually reveals itself. The ‘sacred site’, is shown to be by a boulder in the foreground and mountain range in the distance lining up with the historic photographs. Walking through the overhanging tree branches up to the rock is akin to seeing Plymouth Rock at the Massachusetts coastline. It took a group of 10 historians 4 years to re-locate this site, some of whom no longer reside in Taos. 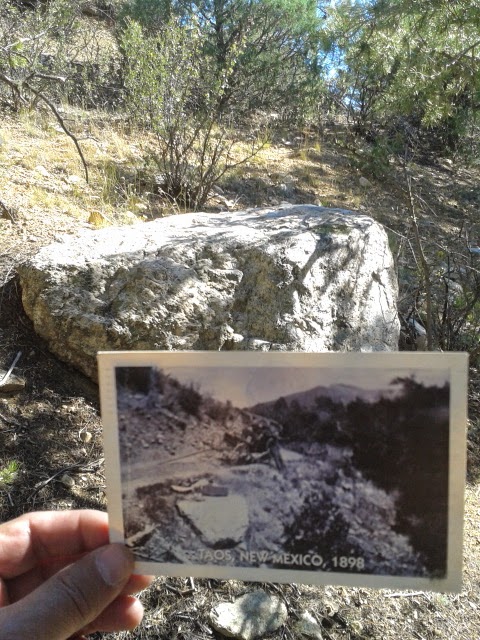 The "Plymouth Rock" of Taos today with 1898 image
I am honored and fortunate to know the location, which was shared with me recently, after 10 years of earning my dues and waiting for the right moment to be taken there (patience and timing in Taos is everything).
Thus began a unique magnetic draw to Taos, or as D.H. Lawrence later put it: “The peculiar ‘otherness’ of Taos.” 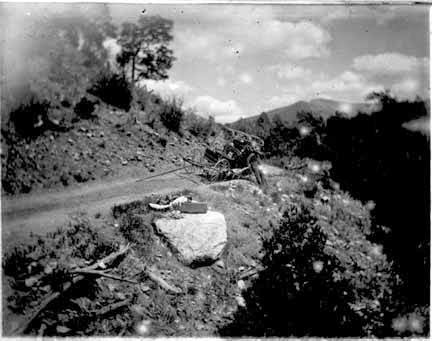 * The 1895 date for Remington being in Taos may or may not be correct, this is also the year he becomes actively involved in sculpture, and is quite busy, yet this is the best date I have found.