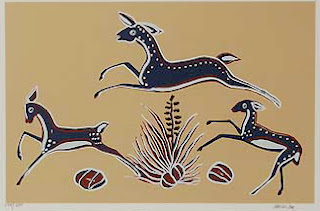 Leaping Deer by Ha So Da Narciso Abeyta Silkscreen,
(we have 2 available at Two Graces Plaza Gallery, a numbered edition and an Artist Proof)
Holly & I have a real love for Taos and the lessons we learn here every day.
This year our Christmas like so many others was a time of reflection rather than of gift giving. No presents under the tree for either of us. Don’t get me wrong we were sent gifts from friends and family. We enjoyed a nice evening out for dinner together, (at Taos Inn’s Doc Martins). Friends dropped off tins of homemade cookies & fudge to us at the shop, and we received many lovely Christmas Cards this year.
We went out to the forest a few days earlier, and cut down a beautiful 10 foot tall Blue Spruce tree which we decorated with the many ornaments that remind us of each and everyone we know and love.
The morning of Christmas Eve a Mountain Bluebird enjoyed the dried Blue Corn on the cob I’d left outside. After a long day at Two Graces Plaza Gallery as I was closing up shop I heard someone shout out to me from the dark “Merry Christmas Robert”. That evening rather than partake in the enormous bonfires at Taos Pueblo or Las Posadas and Christmas Eve Midnight Mass at San Francisco de Asis Church, we chose to stay in and order take out from the new local Chinese Restaurant, (an old family tradition of Chinese food on the eve of Christmas). At home we watched the video of “It’s a Wonderful Life” and drifted off to sleep, well, I fell asleep and awoke as the movie ended to find Holly sitting next to me with tears in her eyes. 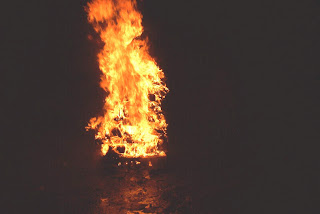 Christmas Eve Bonfire
The next morning on Christmas day we decided to visit Taos Pueblo for the annual Deer Dance. The local newspaper published a 10AM start time, but I knew this would be much too early. Leaving the house at 11:30 we picked up a neighbor to join us. Once at the Village we parked easily and found the entrance gate to be closed! Turned out that we were not to enter until Noon after some private ceremonies had been held at the Pueblo.
Just so you know and a reminder to myself for next time, things really don’t start until after 1:30PM, with the arrival of the Deer around 3PM.
We spoke with some of the locals as we all waited, scattered around the Village, and made the best of a sunny afternoon. 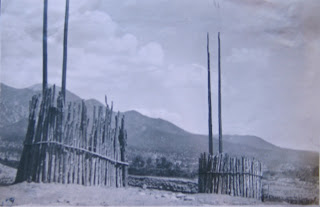 Vintage Photograph of a pair of Taos Pueblo Kivas
The most we could see were the Kivas (sometimes referred to as Estufa) where people were gathering in the distance off limits to non-tribal members. This year even the southside/winter side of the Pueblo was off-limits, as the Koshare ushered people back over the bridge to the Northside. 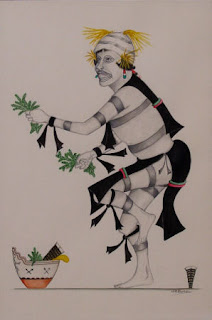 Vigil Pueblo Painting Very much like the Koshare at Taos Pueblo
The Koshare sometimes referred to as ‘clowns’ painted with white and black stripes of clay and soot over their bodies are a society, which has very specific duties of keeping things in order, visitors should give them utmost respect and stay out of their way.
As the Koshare ran from door to door, bringing messages to the Villagers that live there, we waited and watched.
This year there were a lot of foreigners all over the Pueblo, not really understanding the unwritten rules of being quiet and respectful, they seemed to be running amuck. I witnessed at least 3 people with cameras taking photographs, which is strictly forbidden. There were people climbing over and onto walls that were supposed to keep people out, not become an obstacle of which to clamber onto and over. 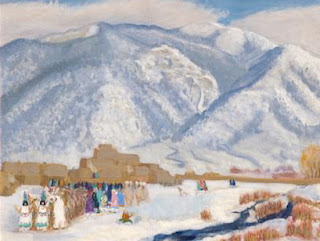 The procession as painted by Helen Blumenschein
The first of the dancers mostly women dressed in finery, and a few men gathered at the eastern wall on the northside. They quickly formed a line and soon began to dance in front of the San Geronimo Pueblo Church, perhaps as a welcoming to the deer yet to come. 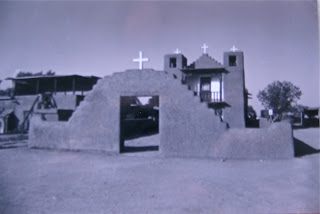 A Vintage Photograph of The San Geronimo Church at Taos Pueblo 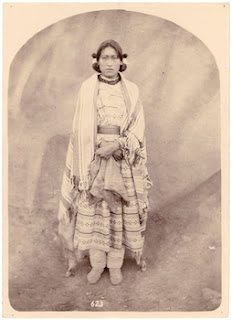 Early 1900's photograph of a Taos Maiden
The women wear beautiful handmade white boot moccasins very specific to the Pueblo of Taos, pinned to ears and dresses wonderful vintage costume jewelry as well as silver & turquoise jewelry, and around necks each with a special necklace. The Koshare intermingle with this ceremonial dance, which eventually moves to in front of the Northside/Summer building. As I watched, perhaps a little too close to the front of the viewing spectators, a Koshare approached me and quickly removed my hat, which he then wore into a tet-a-tet with one of his comrades who had also chosen a hat from another guest. Knowing full well this would not last very long and that I would eventually get my hat back, I stood and enjoyed their acting. This was rather special to me, and soon, quite politely my hat was returned.
Once this group of dancers finished and returned to where they had come from, we waited. 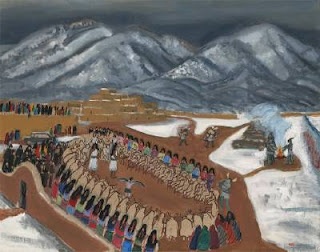 Painting by Helen Blumenschein of Deer Dance depicting Maiden Dancers in colorful dress encircling Deer, with Deer Maidens at center with Koshare Eagle, off to the right are the Koshare with a smokey bonfire!
The Koshare soon returned (now wearing eagle and bird of prey pelts around their necks) and began to build the smokiest bonfire you could ever imagine. Now taking on the role of Pueblo Angel Messengers. The dancers returned once again (in front of the Church) this time with the smoke blowing towards them. I thought of this as purifying incense wafting over them similar to the smoke from Midnight Mass in the Churches back east.

Early Illustration of Taos Pueblo Deer
From the Kiva men and boys began to emerge wearing the freshly skinned hides of deer from the forests around us. I shouldn’t call it wearing these hides, because they actually are embodying the animal, they have become the Deer. Leading the group are 2 White Deer with enormous antlers, they walk with a stick in each hand creating the look of a deer on all fours. These deer are followed by an assortment of Deer, Buffalo, Elk, and Antelope. Some but not all of the skins are fresh, from which you can smell a heavy odor as they pass by, their steps like that of the prancing animal itself. This Deer procession is led into the circle of dancers, where 2 Deer Maidens (distinguished from the other women by their dress and parrot feather headdress) have now welcomed them to join the People of the Village. 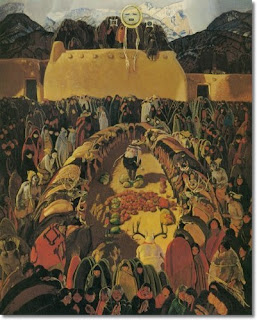 Painting by Ernest Blumenschein of Deer Dance, note the White Deer towards the bottom.
There were some Deer with antlers so large that they needed the support of the Pueblo men to keep them from toppling over. Imagine trying to dance with 50 pound (or more) antlers on your head! The Koshare ‘shot’ small arrows at the Deer and quickly carried their heavy prey out of the circle.
This had now built up to an enormous circle of Deer Dancers, Koshare, Maidens, Men & Women all gathered giving thanks to the wonderful creatures of the forest.
Another awe struck Christmas at Taos Pueblo Deer Dance. We merged with the other Visitors surrounding the dancers trying to get a view over others heads. From where we stood the bobbing of deer antlers was about as much as we could see.
Another reminder to visitors, the Deer Dance is a special ceremony to be able to view, it has probably changed through the years, but not by much. This continues to be one of the most untouched and true forms of ceremonies by an indigenous people in the entire world. I remain thankful that we are allowed to witness this sacred event, it is not my intention to give away secrets of the Deer Dance only to give a report of the things I have seen in my lifetime.
As my legs began to buckle out from under me, even with the help of a cane, we quietly left Taos Pueblo. 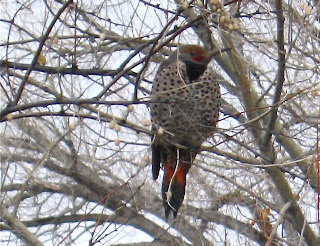 A Flicker wintering in Taos.
The flicker is a sacred bird, and whenever I see one seems to be bringing a very strong positive message.
Stopping into the Adobe Bar at Taos Inn for a snack and a hot toddy on the way home was a nice way to decompress.
Once home we enjoyed collaborating on cooking a Duck for dinner with a Cherry Glaze and roasted root vegetables from the Taos Pueblo Farmers Market.
Settling in for the night with dessert of far too many cookies and fudge, we watched another movie and fell off to sleep once more.
The Images here are used to illustrate this story in order for people who have never been to Taos and who cannot possibly imagine just how visual this experience is.
Posted by Two Graces Plaza Gallery 68 St. Francis Church Plaza at 2:25 PM