Below are 3 dolls ca. 1950's-60's the one to the right was made from a kit and can be considered a craft or boyscout doll including tableta headress this doll stands at 7" priced at SOLD, marked Hemis on the bottom. To the right is a Corn dance style Katsina 6 3/4" and is priced at $299.99. The tallest one in the center is 10" tall and is priced at $359.99, this is possibly a Hunter, sometimes called a badger or a bear. 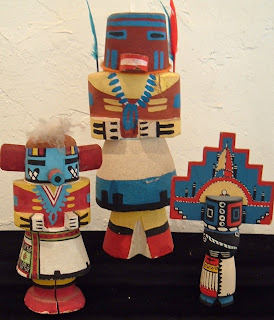 Kachinas with bases are known as Route 66 Dolls and also known as Belly Ache dolls, the base almost always has a notch carved into the front of it. Contemporary Rte. 66 dolls are known as "Pooley Dolls". The contemporary ones are still carved to this day by the sons and grandsons of Elmo Pooley, these are usually found at Southwestern Museum gift shops for anywhere from $5.-$25.
The older dolls which are shown here can be found from $30.-$500. (less expensive ones can be pretty banged up and missing parts). Sometimes they will have the name of the Kachina depicted and often there will be a pencil written price of $1. on the bottom of the base. These dolls were made alongside traditional "tihu" the only difference being that the traditional tihu has legs, and the ones made for the tourism industry beginning sometime in the late 20' early 30's have bases. 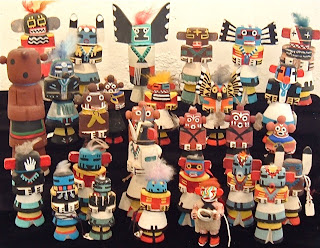 28 Route 66 Kachinas, the front row I've not included in the rest of this blog, they are smaller ones but there is also a Kokopelli here with hump and flute snout he is in the center second row 4 1/2" tall $89.99. These are all great dolls circa 1930-1960's, and a nice place to start collecting Kachina, Katsina, Tihu dolls.

Above, What could be considered by some the best of the lot this line up of 5 dolls are all by Abbot "Sun" Sakiestewa, they are identified by his Sun face stamp on the bottom of each doll, also note that none of these have the notch carved into the front of the base. From left to right the mudhead 3 1/2" tall $79.99, Whipper just over 3" SOLD, the center one is a Hunter and has been painted with silver automotive paint SOLD, 4 1/4" tall, with leather enhancement around kilt and on top of head. Second from the right with the rainbow paint on his face is Corn Kachina 4" tall SOLD, far right is Papago Owl (why someone wrote Papago on his base I do not know and can only speculate that it was originally purchased at a trading post shop on the Papago reservation) at 4" tall he is priced at SOLD

Above starting at the left Ogre marked 8/22/60 on the bottom 4 3/4" tall priced at SOLD, the next one with the tall 'ears' I believe the writing on this says Hunter 4 3/4" tall $59.99, Crow
Mother third from the left big wing like ears 5 1/2" SOLD, Brown face with stars on forehead 4" tall SOLD, Warrior Kachina which is the second from left just over 4" tall with large striped wing like ears $89.99, last on far right Ewiro Ogre signed 'by Pooley", probably Emo SOLD 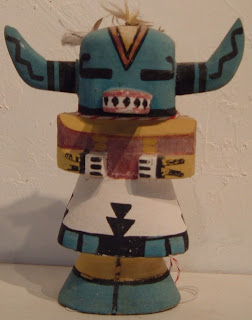 Since I've already written about this one his original price in pencil was $2. today's price is $199.99, at 5" tall a great doll. Note the base is not notched but without the sun stamp this can not be truly identified.