“When Modern Was Contemporary: Selections from the Roy R. Neuberger Collection” at the Albuquerque Museum of Art & History 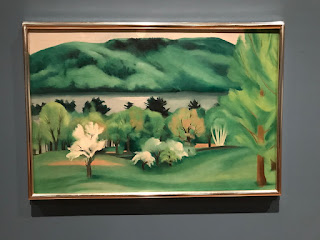 As a devoted art lover Roy R. Neuberger was actively involved in supporting ways in which learning can occur by looking at art. Beginning in 1969 and continuing throughout the years, Neuberger donated works from his collection to found this Museum in his name forming the core of its collection. Today, the Neuberger Museum of Art on the campus of Purchase College in Purchase, NY has grown to more than 7,000 artworks. 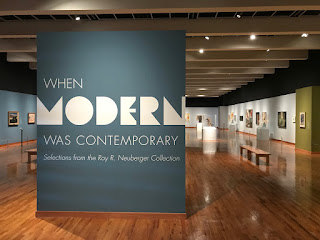 Entryway to the exhibition at the Albuquerque Museum of Art & History

This exhibition brings a unique opportunity for artists and lovers of art to see for themselves, here in New Mexico, some of the masterworks of Modern Art. There are 56 works of art from the Neuberger Museum of Art in this exhibit. As you enter the gallery three significant paintings from the Alfred Stieglitz “Core of Three” artists (O’Keeffe, Dove & Marin) are presented. These modernist landscape paintings include, ‘Lake George by Early Moonrise’ (1930) Georgia O’Keeffe, ‘Holbrook’s Bridge to the Northwest’ (1938) Arthur Dove & ‘Sea and Rocks, Mount Desert’ (1948) John Marin. They create an engaging prelude of what’s to come in the exhibit. Of the three, Dove was the one to have never visited Taos. Another of the artists who had visited and painted in Taos was Marsden Hartley, who’s “Fishermen’s Last Supper, Nova Scotia” (1940) hangs directly across from the Stieglitz modernists. There’s a temptation to straighten the picture as it hangs on the wall, the entire scene disconcertingly slides to the left. 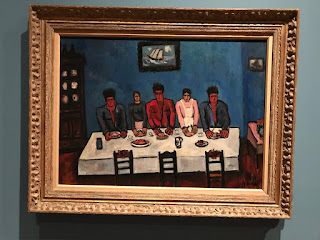 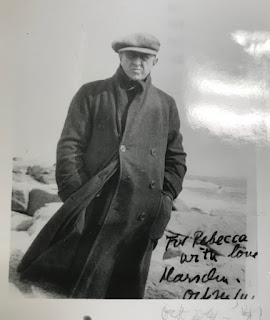 Photograph of Marsden Hartley, Maine 1941 (from a Taos Archive) 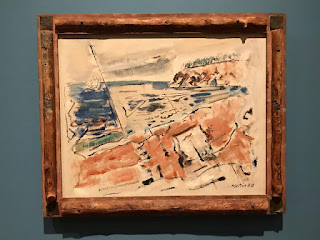 Receiving the most attention from visitors is Jackson Pollock’s painting ‘No. 8’ (1949) full of automatic rhythmic energy. Pollock’s iconic drip paintings are recognized as the cornerstones of American Abstraction. With the recent post-war art auction results once again setting records, the Pollock may be the most valuable painting here. 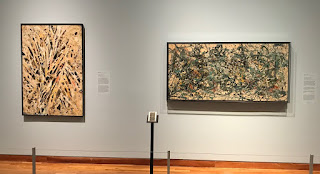 An Alexander Calder hanging mobile sculpture ‘The Red Ear’ (1957) is also a favorite of visitors. Calder had thoughtfully described hismobiles as ‘Visual Poetry’. The casting of shimmery shadows on the museums walls creates the illusion of a much larger mobile. With ever-so-slight movement, it is indeed poetry in motion. 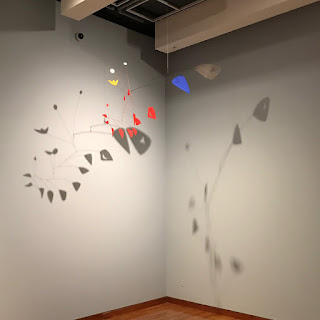 Located centrally on the back wall of the gallery, the glowing Mark Rothko ‘Old Gold Over White’ (1956) will completely draw you into it. Stunningly beautiful, this is the painting you’ll want to sit and gaze at, it is the sun and the moon on the surface of a canvas. “Rothko said he wanted a presence, so when you turned your back to the painting, you would feel the presence the way you feel the sun on your back.” as told by one of Rothko’s students Murray Israel from “Mark Rothko a Biography” 1993 by J.E.B. Breslin. While working on the Rothko Chapel for the Menil’s, he was drawn to Taos, here Rothko could see the pure light of this high desert mountain village and the inspirational San Francisco de Asis Church. 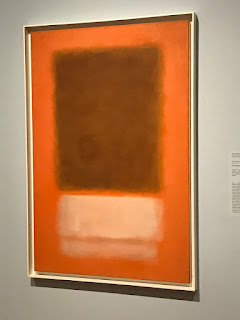 Ann Temkin, writing about Abstract Expressionism, states: “…art that its makers felt to be profoundly linked to private spiritual and physical experience, it provided a polar opposite to the mass culture represented by the comedy and variety shows on TV. In the half century since, television has given way to the ubiquity of electronic screens in daily life. But for the Abstract Expressionist art to operate fully, the experience must be firsthand - there is no virtual substitute for the encounter between the viewer’s body and the canvas or object.” from “Abstract Expressionism in the Museum of Modern Art”, 2010. Room with a view of Willem DeKooning "Marilyn Monroe" 1954

The Willem DeKooning painting ‘Marilyn Monroe’ (1954), from the artist’s ‘Women’ series, is a highlight by one of the masters of the Abstract movement. DeKooning describes his process this way: “I used to cut out a lot of mouths and then I painted those figures and then I put the mouth more or less in the place where it was supposed to be. It always turned out to be very beautiful and it helped me immensely to have this real thing. I don’t know why I did it with the mouth. Maybe the grin… That I was very conscious of - the smile was something to hang onto.” taken from an interview with David Sylvester for “Content is a Glimpse” 1963. “Marilyn” is a classically gestural action painting, sexy and splashy, it’s about DeKooning’s body and movement, and perhaps, that of Marilyn’s as well. 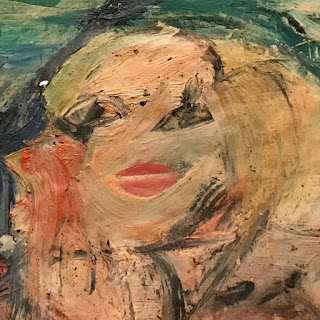 One of the primary art critics of the period, Harold Rosenberg wrote in a 1952 article “The American Action Painters” for Art News: “…what was to go on the canvas was not a picture but an event. …act(ion) painting is of the same metaphysical substance as the artist’s existence. The new painting has broken down every distinction between art and life.” 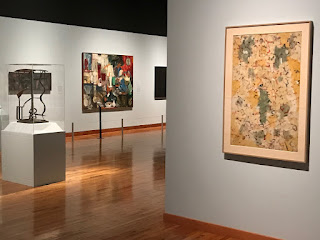 Many of the artists collected by Mr. Neuberger were new and upcoming artists, before they were famous, and he believed that purchasing their work could help artists who needed money now, and this financial support would then help them stay on their career tract. Neuberger in his own words, stated: “The contemporary world should buy the work of contemporary artists.” When asked about the thread that ties the collection together Albuquerque Museum Curator Andrew L Connors stated: “(This), quote sums it up for me. Mr. Neuberger was completely committed to supporting living artists and to make sure that none of them died penniless as Van Gogh had done.  He was not collecting to satisfy his own aesthetic priorities, he was collecting to allow artists to satisfy their own vision.” A topic for many artists through the years, Grace Hartigan spells it out in her own words quite clearly: “It was a nice crowd, all seemed to admire, etc., but I feel let down and fatigued… What I really want above all this time is to sell, so that I can be relieved of financial worry for a few months.” from “The Journals of Grace Hartigan 1951-1955”, written after her solo exhibition in 1954. 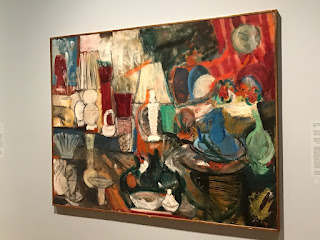 Much of the art will make you pause to look a bit longer in this ‘best of’ modern art exhibition in America. In 2007, The Harwood Museum, Taos showcased the work of “Richard Diebenkorn in New Mexico, 1950-1952”. His large scale ‘Girl on a Terrace’ (1956) here gives a pleasant reminder of just how vital a painter he was. Paintings that will capture your imagination and hold your attention include: Nathan Oliveira ‘Standing Woman with Hat’ (1958), Adolph Gottlieb ‘Evil Omen’ (1946), William Baziotes ‘Dying Bird’ (1950), Milton Avery ‘Walker by the Sea’ (1961), and Rufino Tamayo ‘Woman Spinning’ (1943). This list doesn’t cover half of it. Rounding the collection out even further are paintings by Philip Guston, Romare Beardon, Lionel Feininger, Helen Frankenthaler, Lee Krasner, Roberto Matta & Mark Tobey. Artists you may have never heard of will leave you wondering why you weren’t aware of them; they include: Grace Hartigan, Ilse Getz, Anne Ryan, Morton Schamberg, Lee Gatch, and Kenzo Okada. Luscious paint, form and color is everywhere in this exhibition you’ll find it inspiring and worth the trip to the Albuquerque Museum. 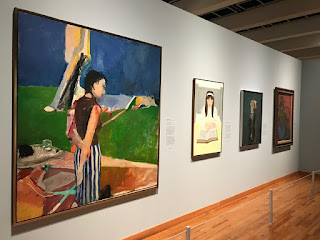 Richard Diebenkorn "Girl on a Terrace" 1956 in foreground

Thank you to everyone of the staff members at the Albuquerque Museum, your guidance, patience  and time was invaluable to me. I'd originally written this on my own initiative in speculation to have it shared with readers of Tempo, the Arts & Entertainment section of the Taos News. With the Holiday Season upon us Tempo has had more stories than it needs at this time of year, thus this piece had been bumped two weeks in a row. I'm certainly glad I took the time to take a trip to Albuquerque to see this exhibit for myself. There's still time to enjoy it, the exhibit is up until the end of the year. thank you for reading. Here it is in it's entirety for readers to share from this blog. 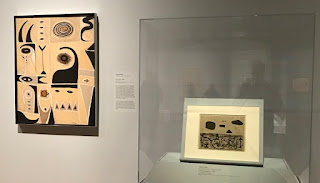