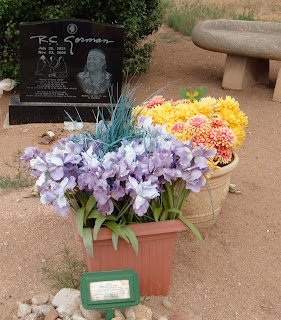 This morning I took a bit of time to visit the famous Navajo Taos artist R.C. Gorman. He's been gone now for 5 years but he's buried at his former estate. A few years ago the house was purchased by a Taos Charter school to become their school campus. They were taking out doors and stained glass windows to sell and virtually loot the place, until finally they went bankrupt and now the bank foreclosed on them. There's a lot of disarray and construction stuff left behind, the gate's open and the Japanese Garden walkway has fallen over. All in all it's quite a mess and very sad, as the saying goes 'RC is probably rolling over in his grave'. 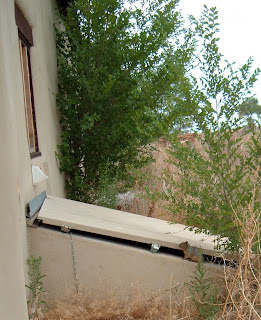 Animals have moved in, with evidence of squirrels, pigeons and mice all over the place.
Recently a truly great RC/Taos story was told to me, it goes something like this: On RC's property he started noticing a colony of prairie dogs moving in. He called the nearby vet asking if he could borrow a live trap in order to catch the critters alive. Once caught he put the prairie dogs in his trunk and brought them to the other side of the Gorge Bridge to release them. After a few days RC noticed that his Mercedes was now infested with fleas. Again he called the local vet and asked about getting rid of the fleas. When whatever it was the vet recommended didn't seem to work he traded in the Mercedes. Now that's an RC/Taos story. 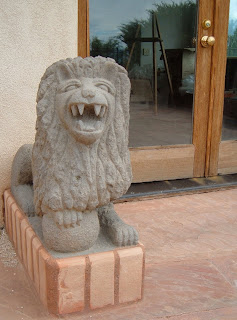 Through the door of the Great Room a pair of lions stand guard where there was once a White Baby Grand Piano, and an easel always set up for an impromptu RC drawing. 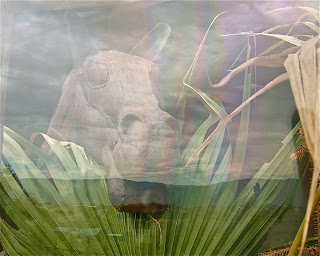 Through the window of the room that at one time had a beautiful swimming pool in it stands a life size horse sculpture looking out, a silent witness to the destruction left behind. 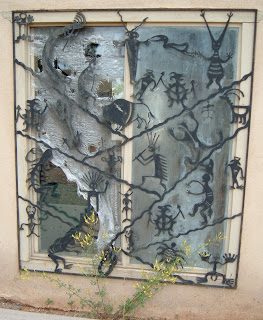 Petroglyph ironwork over a large window to the pool house, how appropriate are these spirit beings dancing around at RC's place. 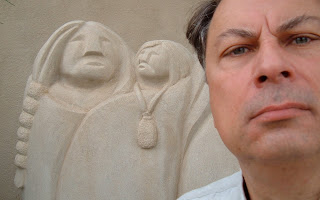 The sadness felt by myself and a few of the stoic stone carvings left behind. 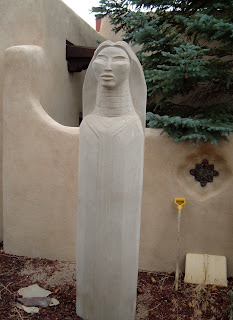 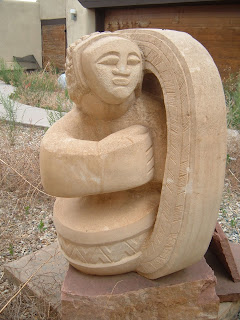 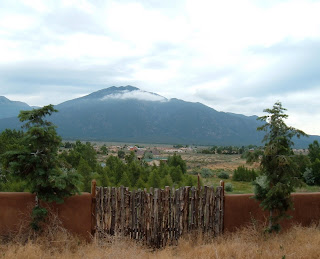 When we moved to Taos 8 years ago our home was just below RC's house, here's the view below with the Taos Blue Mountain in the background. Mr. Gorman would have "Indian Market" parties here after an opening back at his gallery in town. Invited guests ate & drank all they could, we were fortunate to be on the very special guest list and relished receiving the invitation. In the latter years the parties were much more subdued, RC would hold court in his magnificent bedroom with friends and movie stars gathered around. Just off the bedroom the dressing room was hung with photographs of RC and his famous friends along with a portrait of RC painted by Andy Warhol. In the hallway to the bathroom hung a small red ink painting of a Kachina by Fritz Scholder, which I later purchased for my own collection from the Gorman Estate Auction held here in Taos a few years ago. RC purchased a Mickey Mouse Zuni inlay ring from me here at Two Graces, he had the ring encased in Gold by local jeweler Larry Martinez, who kept it in it's original silver work and then encompassed it in gold. I was told that to keep it clean, RC would put it in the pocket of his jeans before they went into the laundry! During the Estate Auction I tried bidding on the ring but the price went higher and higher, and I really did want that Scholder painting. The couple that purchased the ring came by my shop the next day after the auction to show me the ring and allowed me to put it on my finger for a moment. I had a duplicate of this ring, I carry a large assortment of vintage Navajo & Zuni Mickey rings at Two Graces, they purchased one of the Mickey rings for their daughter so she wouldn't covet the RC Gold one and she would have her own. In is home the bookshelves were full of books and it's also where RC kept toys, folk art and his collection of Kachina dolls. It was an honor to have known RC, his kindness and support of local artists is sorely missed in Taos today. 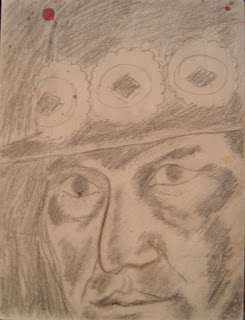 This is a linoleum block with pencil drawing by RC which was purchased from the estate of Virginia Dooley, Gorman's long time gallery director of the Navajo Gallery, who is also gone now. The Gallery is still in operation and can be found on Ledoux Street just up the block from the Harwood Museum of Art.
Posted by Two Graces Plaza Gallery 68 St. Francis Church Plaza at 1:06 PM 5 comments: 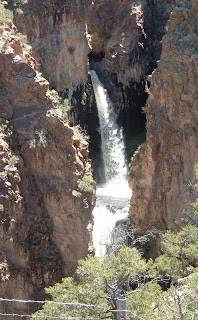 On the Fourth of July this year we visited Nambe Pueblo's Waterfalls Pow Wow, with Holly, and friends K & E. It couldn't have been a more perfect day and place to spend the fourth. The last time I'd been to this particular event was 21 years ago, so it was great to be told is was still being held when I called the Nambe Pueblo Governer's office the week before. This great waterfall is a short trip from Nambe Pueblo and not far from Chimayo, this is the place where the Avanyu or Pueblo water serpent rests. Knowing to ask and acknowledging respect for the people of Nambe I asked if we could still walk up to the falls, being told we had 2 options, to walk up to the top for the scenic photo op or to walk up river to the pools and go in for a swim.
At such a sacred site I was amazed how welcoming the village is to it's visitors. 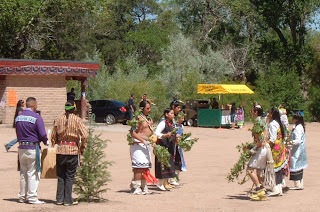 With a $5 camera badge pinned to my shirt I took this image of the Corn Dance, normally photography is not allowed during ceremonies, that's a roasted corn cart in the background. 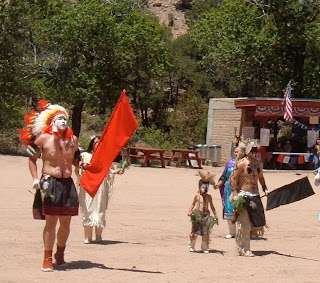 A Comanche style dance was held, the little guy there is wearing a plains style roach Headdress which my neighbor Del Orr still makes and is one of the very last Native Americans making these to this day. 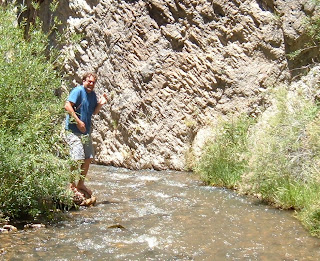 E on a rock taking a break from the FREEZING cold ice melt water, and barefoot. The water runs over the dam into a couple of pools below, but it also comes rapidly straight out of the cliff rocks on each side of the river. If you are to go to Nambe Falls during the summer, wear shoes that are made for walking in the water, something like crocs, anything on your feet will be better than nothing like E here. Flip Flops are not the best choice as the current will sweep them off your feet faster than you can lift a leg out of the water. Again this water is COLD. 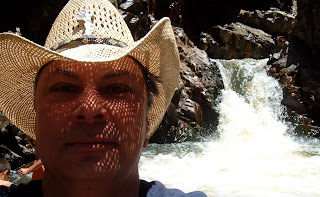 I walked all the way up to the first pool in my brand new Puma Neo runners, lots of tread gripping all those rocks on the river bed kept me upright, thankfully, allowing me to take this little camera of mine. With a little more time I'd have gone up to the next pool level, the water is coming too fast and scrambling up and over the rocks would be the only way into it.
The Nambe Falls are a true New Mexico treat, thank you Nambe Pueblo for allowing your visitors to enjoy this great blessing.
At the end of the day and back at home we walked up to the Ponce de Leon Hot Springs for a refreshing natural warm water dip in the pools, a big difference and a great Fourth of July. R
Posted by Two Graces Plaza Gallery 68 St. Francis Church Plaza at 2:01 PM 3 comments: