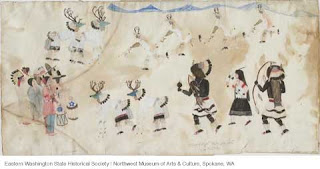 Today is King's Day, which for most of the Pueblos of New Mexico means the changing of the Tribal Government and the transfer of the Canes, which signify the sovereignty of the Pueblos. On this day a Buffalo Dance is held,
(again at most but not all), to commemorate this Inauguration Day. This afternoon it was a warm sunny and perfectly clear day. The forecast was for snow flurries in the afternoon.
The first thing I noticed was how dressed up everyone was, the Taos Pueblo ladies in their best colorful robes and finest jewelry peaking out from under these wraps. Then too, I began to notice how many people were there, and how many Anglo-Saxon local Taosenos (and also all dressed up) many people who I know, and everyone saying hello, or making an effort to come over and greet me, which was really nice, again the warmness and friendliness of Taos at it's BEST.
The drumming began, and there they were a long procession of Buffalo Dancers, Deer Dancers and what I would call Priests or Caciques with drums and wrapped in very handsome colorful robes. The Buffalo Dancers have over their heads entire Buffalo heads, which have been cured and are kept through a participants lifetime, and are normally skinned and cured by that person. The Deer Dancers wear freshly skinned deer heads and pelts draped over their heads and down their backsides, they walk with canes to mimic the long legs of the deer. The procession makes it's way along the Eastern wall and then along the North Pueblo Buildings until they reach the front of the Church. Along the way they take their time to stop and dance and honor the villagers and guests. As they arrive at the Church which is on the Western side they are encircled by everyone trying to get a better view. I stood behind the drummer/singers, very rhythmic and steady here is a link to an example of what this sounds like:
http://www.kylegann.com/ZuniBuffalo.mp3
I hope this works it's worthwhile and will transport you there.
The other link I'd like you to try is a video of an actual Buffalo Dance at one of the Hopi Villages, this is considered a social dance at Hopi so is not considered sacred and taboo for me to give you here:
http://www.digitalsmokesignals.com/video/hopi-buffalo-dance-in
The 2 examples of paintings here are rather good depictions, but at Taos there are about 50 Buffalo Dancers adults and children, about 6 Deer Dancers, and 24 Caciques, some drummers and some just keeping an eye on things. The drums are the hand drum sort as seen below, bodies are painted with the Sacred Red Clay, Pueblo Kilts of all varieties are worn and all sorts of footwear from elaborately beaded Moccasins to Doc Martins. 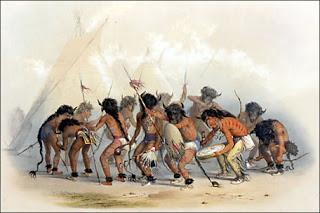 As a part of the new administration in the White House, President Obama and his staff have the honor of choosing artwork to hang in the White House, (no the lead up to this is not that they've chosen one of my paintings), they have chosen 2 of George Catlin's paintings and I'm pretty certain that this is one of them. Buffalo Dancing in the White House!
Please Note: I've double checked on this and although the Obamas have chosen 2 of Catlin's Paintings, one of them is a "Buffalo Chase" and not the painting depicted above, Buffalo's nevertheless.
This is one of the very special ceremonies at Taos Pueblo, that has continued in a true untainted tradition. For the Pueblo to allow outsiders like myself to attend is a great honor and one that I hope to enjoy as often as I can. To the people of Taos Pueblo Thank You Very Much, R
Posted by Two Graces Plaza Gallery 68 St. Francis Church Plaza at 3:23 PM 2 comments: