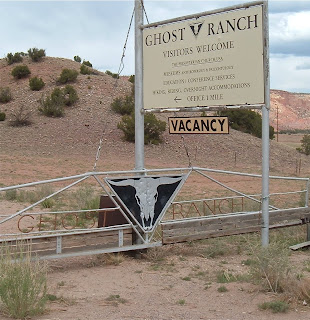 Here's my tour of the trails at Ghost Ranch and a bit more. Usually we go for a hike at Ghost Ranch in Abiquiu about this time of year in the Spring. Wildflowers are blooming, just clinging to life and birds have migrated in for the Summer months. Ghost Ranch has quite a check list of 227 species of migratory birds that come through. The ranch property is open to the public on a regular daily basis, (there is now a small check in fee of $3.). There are classes you can take and you may even book a bungalow to stay there for a few days retreat, check them out at www.ghostranch.org PLEASE, be sure to check in at the office, hikers need to let someone know where they'll be going just in case of an accidental emergency. Seeing the film "127 Hours" will make you think twice about gong off on your own without anyone knowing you've even gone. 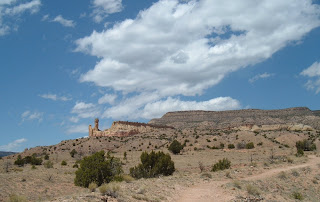 The Chimney Rock trail we usually take is 3 miles there and back, 5 years ago it took me 25 minutes to get to the top, this year it took 41 minutes. You are going to the top of that mesa in the distance, and believe me it's worth the effort. The altitude is what will get to you so take your time and bring 2 bottles of water in your backpack, one for up and one for down, Drink it!
A snack of some sort is also a good idea, please take your trash with you, don't leave it behind. 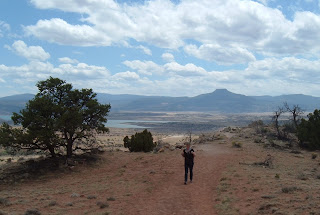 On this day it's a bit cloud covered which is actually good, keeping us from over heating. That's the famous Georgia O'Keeffe "Pedernal" mountain in the background behind Holly on the well marked trail. 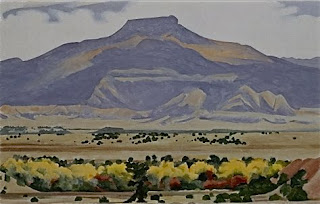 O'Keeffe claimed the Pedernal as her own, and included it in many of her paintings, the painting above I have cropped and recolored. There is a trail for Serious Hikers to take you to the top of this pedernal mountain, it is Quite difficult and should only be done by people who know what they are doing and are in tip top shape, (which leaves me out). 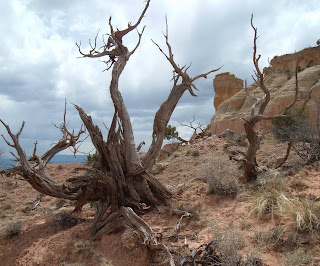 Along the Chimney Rock trail are many ancient trees clinging to life. 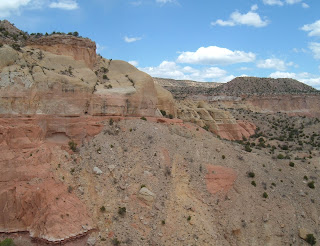 The views and color of the sandstone cliffs inspired O'Keeffe, along the trail if you are extremely familiar with her work you'll spot places where she stopped and painted. 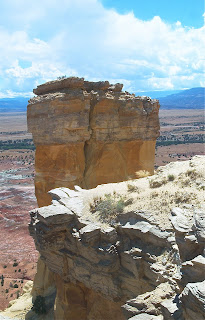 Here's the top of Chimney Rock Mesa, PLEASE do not stand too close to the edges, there are fractures on some of the undersides that you would never be able to know about that may give way. This birds eye view comes complete with hovering Ravens catching the air currents, stay still and one will glide out of nowhere before you know it. 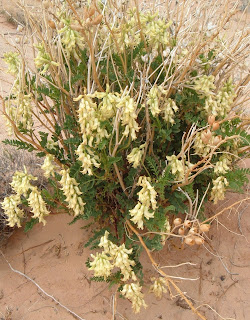 We noticed this clutch of wildflowers at the top as we wandered around. We also saw something similar to blue perriwinkle flowers, red desert paintbrush, white mountain astors another yellow flower and Mormon tea.
As we headed back down the trail I thought of how much Holly's Mom & my Mom would have enjoyed seeing all this. 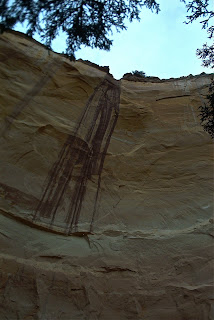 On a windy day the trail you should choose to take is the Box Canyon trail, it runs along a small stream which you follow to the dead end of monumental cliffs leaching water into the stream.
The Box Canyon is a 4 mile there and back fairly flat trail. 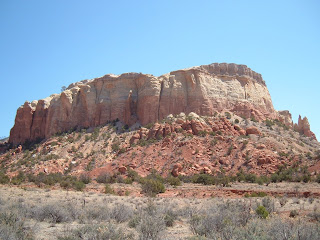 The third trail which I would not advise for most people is the Kitchen Mesa trail, this one is about 5 miles round trip and you'll need almost 4 hours time. You begin easy enough, very flat taking you around the back of this mesa, you head toward a further mesa and start climbing up. 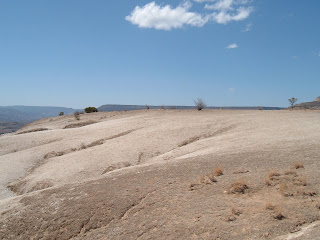 At the top of Kitchen Mesa it is rolling dunes of gypsum with some flora, it feels like you are on the top of the world. Again, not advisable to get too close to the edge. 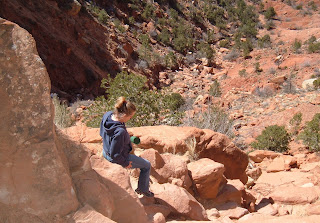 The Kitchen Mesa trail at some point just before reaching the top has two precarious sections. The first tricky dangerous part is a NARROW foot path barely wide enough for a single foot. One slip and it's straight down. The second tricky section is just above this area and is a crack in the rock wall, which is narrow and which you will need to lift your legs one at a time into horribly uncomfortable positions to gain altitude. In the photo above is Holly scrambling to get back down. We were both so afraid going up this trail that neither of us would admit to the other just how frightened we were! I am TOLD that there is an easier back way to get up to the top of Kitchen Mesa, so far I have not found it. 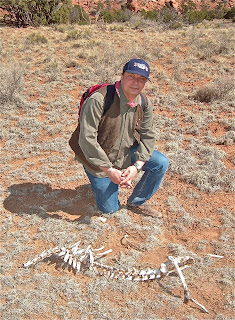 O'Keeffe turned everyone into bone collectors, and to this day you may still come across the spine, skull or who knows what part of an animal's bleached remains. I left this vertebrae in place for the next person to discover.
The Gas Station and General Store at Abiquiu is a real treat, so make this a part of your trip and stop there. They have food and snacks, with a nice wine selection for an impromptu picnic.
The folks that work there are all really nice, even to the craziest of tourists like me. The thing I noticed that struck me as odd, being a former New Englander, was that they carry Samuel Adams Beer & Cape Cod Potato Chips! Holly says it's all about branding, I say maybe we need an Abiquiu Brew, (they do carry tortilla chips and salsa). 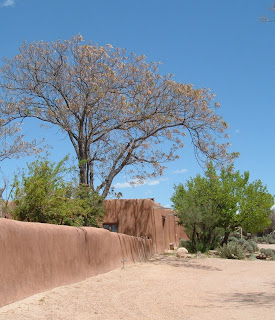 A short stopover in the village of Abiquiu proper brought us to the O'Keeffe house, which has a great big wall around it. There is a "NO PHOTOGRAPHS" sign posted at the gate, so of course I took this of the house. I've never been inside for the official tour which costs $35., the grounds have flowers and trees growing, it's nice to see how well taken care of the place is. The one thing I'd like to see for myself inside the house is her library,
I wonder what books she collected???
Many, many years ago some friends would drive into the driveway here while O'Keeffe was still alive. They'd wait to see if anyone was around, and one time Miss O'Keeffe was there and came out yelling at them to leave. She was so exasperated she tossed an artists pallette knife at the car, which they had the good sense to quickly pick up and sceedaddle out of there with it. As this was a great old friend of mine, she one day appeared with this pallette knife to show me and then made a gift of it to me. Now I can't prove it really was O'Keeffe's but what a wonderful story, and I still have it, which I actually use for painting with it. 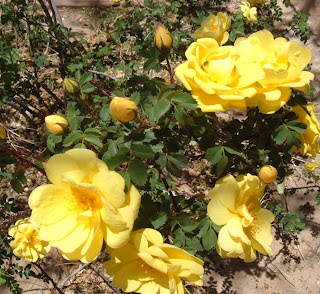 A cluster of yellow roses just outside the O'Keeffe Abiquiu residence, I was good enough not to pick any. Perhaps I should have and sent it to my Mom. 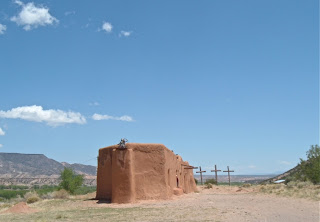 Lastly, around the bend of the road from O'Keeffe's place is this beautiful Morada, a place of the Penitente where worship for the Stations of the Cross during the Easter season still take place to this very day. There were 2 men outside by the door firing a couple of antique guns, at first I was skeptical of stopping to take a photograph. I drove further up the road, turned around and stopped again calling out to the men if they wouldn't mind if I were to take a photo of the Morada, they said they didn't mind at all, so here's my shot, I mean photograph.
Posted by Two Graces Plaza Gallery 68 St. Francis Church Plaza at 4:27 PM 2 comments: