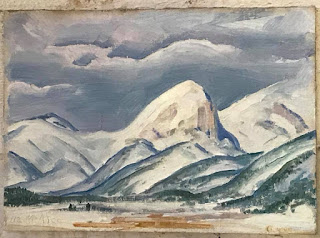 This oil painting by Ila McAfee is 5” x 7” on canvas board is full of dynamic energy, reminiscent of Arthur Dove, Marsden Hartley and John Marin. Ila in her own words, preferred to “paint action and emotion from imagination”. The painting at lower left is clearly signed in the fresh paint (inscribed), “Ila Mcafee” and is currently in the original ca. 30’s champagne silver frame. The painting depicts the ‘Snow Covered Sangre de Cristo Mountains’ of Taos from the point of view of the El Salto area meadows ca. mid-1930. The small scale of the painting is not in any way a deterrent to its powerful presence. Taos artists often painted what was commonly known as “suitcase” paintings, small format paintings which were easily packed into visitors’ suitcases to immediately take home with them, (no need for shipping).

McAfee studied art at the Haz Studio School, Los Angeles, CA, the Art Institute of Chicago, Chicago, IL, National Academy of Design and Art Students League, New York, NY. McAfee was an artist of the WPW New Deal Art project with work included in many museums across the US, including the Harwood Museum of Art (Taos), Millicent Rogers Museum (Taos), Albuquerque Museum of Art & History and the Museum of Fine Arts, Santa Fe. She was also a Black & White graphic illustrator and illustrator of Children’s books. In her later years she adopted cats which she named Sanka (every one of them) and trained them to perform ‘tricks’ which she filmed and are available to view online on such websites as Youtube https://www.youtube.com/watch?v=TAKfrJiBKg4 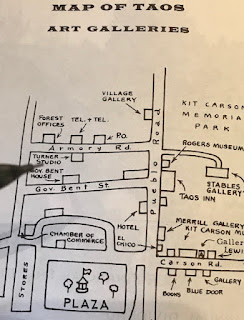 In 1926 Ila married Elmer Page Turner (also an artist) when they visited Taos for the first time. In 1928 they settled in Taos and became actively involved in the newly formed and gaining in popularity Taos Art Colony. The two story McAfee/Turner home on Civic Plaza Drive in downtown Taos is easily noticeable by its carvings of simplified horses carved into lintels over the front door and windows. Their home and studio was known as the ‘White Horse Studio’. She became known for her pueblo paintings and her depictions of horses and landscapes. In 1981, McAfee was voted Taos Artist of the Year. “Indians, Horses, Hills, Et Cetera” was published in both hardcover and paperback editions in 1982, a book of her poetry, illustrations and paintings. Two Graces Plaza Gallery currently has copies of bot Hard & son available. Of the hardcovers it is common to find them with her signature and a drawing of a horse at the front piece. “All the Year ‘round With the Furry Folk” 1968 is a book which she illustrated for author Jane R. Mason. In 1993 McAfee moved to Pueblo, Co to be close to family members where she passed away in 1995.

The Lintel over the window of the White Horse Home & Studio

Ila was asked her first impression of Taos during an interview with Rita Simmons for Southwestern Art Magazine she answered: "[Taos] was so different then, the village was small and the Indians remained uninfluenced by the invaders. Once I asked one of them, "What did you call this country before the Europeans came?" 'Ours,' he told me." 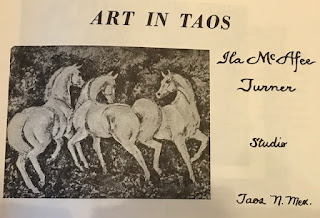 An advertisement for the McAfee/Turner Studio

In 1929 McAfee began showing her paintings at Millicent Bailey’s “Taos Art Shop” on Pueblo Road, where she was shown alongside Taos Society of Artist painters Bert Geer Phillips & E. Irving Couse. In 1939 she was one of the few women artists of Taos to become a member of the Taos Artist Association which then went on to organize a gallery inside the La Fonda Hotel on Taos Plaza, the La Fonda de Taos Gallery. The La Fonda Gallery became the most successful art gallery in Taos featuring “old time Taos artists, with a few others ability”, was Joseph Sharp’s take on the newly formed gallery. Through the years the McAfee/Turner White Horse Studio was open to the public. McAfee also exhibited at the Sagebrush Hotel and at the Taos Blue Door Gallery. 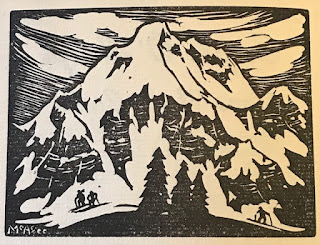 Snowy peak lifting high
Is white-bright, a point of light,
Symbol of uplift in the sky.

Better aims of man to guide,
Pointing his way to strive
The spirit of wisdom at his side.

The influence of the poet T.S. Eliot is evident here particularly “Ash Wednesday” 1930. 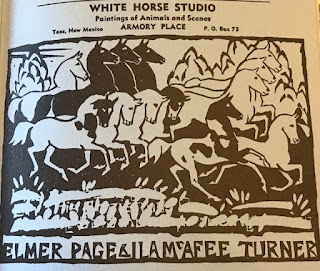 An Advertisement for White Horse Studio

Ila McAfee is one of the many women artists who found her place and inspiration in Taos, a place which allowed her (and others) to flourish as an artist. She was one of the best trained artists to arrive in Taos. This untitled work of the Sangre de Cristo Mountains covered in snow stands among some of the best painters of the time period. Whether compared to the paintings of Georgia O’Keeffe’s love of her pedernal, the fresh eye and spirit of Arthur Dove, or the hauntingly beautiful New Mexico landscape paintings of Marsden Hartley, this painting is a jewel among its peers. 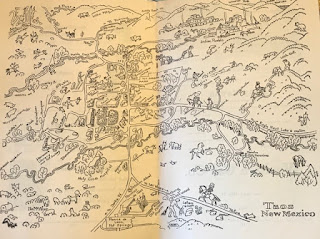 A drawn Map of Taos by Ila McAfee

Two Graces Plaza Gallery has from time to time had paintings by Ila McAfee available, please check with us of what is currently in stock. The Snow Covered Mountains painting has found a loving home that looks out onto the Taos landscape.