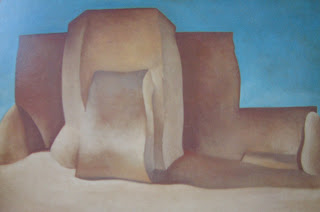 The painting that truly made this great building famous. Thought to be the most photographed & painted image of a Church in the USA, perhaps the entire world. This iconic structure creates a challenging composition for artists and photographers, the ever changing light creates a shadow play, the adobe color against the bluest of skies, and the ever evolving soft edges.
This post is of images of the back only, another post sometime soon will be of the front, and yet another of the interior using vintage images of the inside. 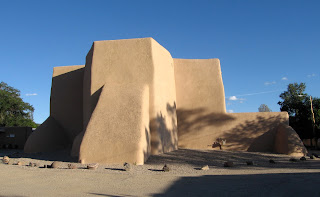 Late in the day around 4PM the shadows from nearby trees fall softly upon the Southwest side. 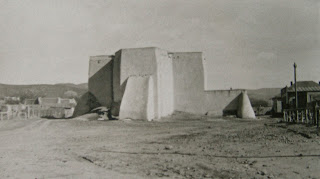 The great Church sits in the middle of the Plaza of Ranchos de Taos, a living community of homes and shops. 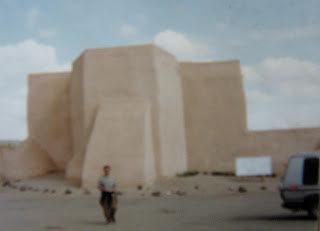 Sorry but you'll have to wait for just the right photo op, whether it's a parked car, or people, or the clouds just not right, this is the challenge for all photographers who visit. Over the past few years the electric lines have been removed, at one time a sign was erected to cover the gas meter that was installed years ago when the Church changed from (rather dangerous) wood stoves to gas heat, (although the sign has been removed, the gas meter is still in place, yet painted an adobe color to try to fit in). Please refrain from taking photographs inside the Church. A common courtesy request, if you must take a photo of someone please ask first, and never take photos inside any of the shops without asking first. 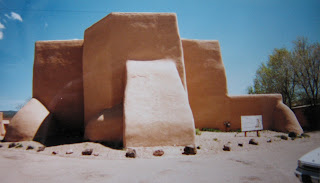 How old is the San Francisco de Asis Church?
a.      It was ordained in 1813 by the Catholic Ministry of Santa Fe, this is the best date available and varies by a few years according to various sources. It took over 50 years to build.


Why does the Church face away from the road?
a.       The Church was built to face a branch of the Old Santa Fe Trail, which comes up from the meadow to the southeast. State Highway 68 was built in the mid 1930’s as a ‘shortcut’ to Santa Fe, the Plaza is located a few hundred feet north of mile marker 41.


What is the San Francisco de Asis Church best known for?
a.       The backside of the Church with the enormous buttresses has been photographed and painted by numerous artists, most notably Georgia O’Keeffe. The Church has been called the top place to see before you die by Yahoo. 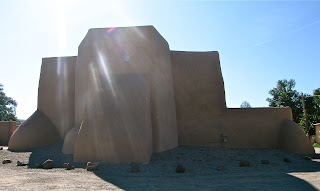 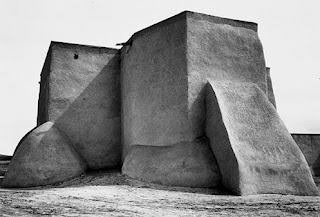 Where did Georgia O’Keeffe live?
a.       She stayed at the Mabel Dodge Luhan house, and at the Sagebrush while in Taos.


Where can we see O’Keeffe’s paintings, especially the ones of the Church?
a.       All of O’Keeffe’s paintings are in private collections, many in Museums, including the O’Keeffe
Museum in Santa Fe. The new Blake Hotel at Taos Ski Valley does have O'Keeffe  prints and paintings on view occasionally. 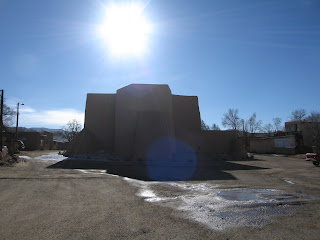 What is the Church built of?
a.       The adobe mud and bricks consist of a mixture of dirt, straw & water. Each Spring at the beginning of June the Church is freshly coated with adobe mud, done by the community and visitors, this process is called the Enjarre.

Anything else?
a.      Yes, glad you asked, some of us believe that the Church & Ranchos Plaza is built on a Spiritual Vortex. 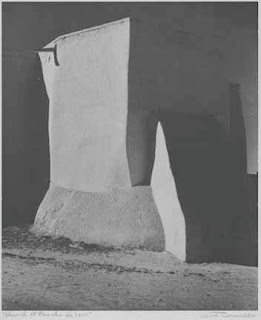 What’s with all the skulls?
a.       In the iconography skulls are depicted with certain Saints and are meant to remind you that death is always with
us, yet there is salvation through Christ. Also skulls and skeletons are displayed for All Saints Day & All Souls Day. 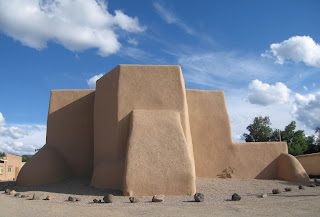 Are public restrooms available?
a.       Since the Church office has closed its restrooms to the public, the closest are at the Taos Visitor’s Center 1.5 miles north at the intersection of Paseo del Canyon. Regretfully this is due to the age of all of our buildings plumbing. 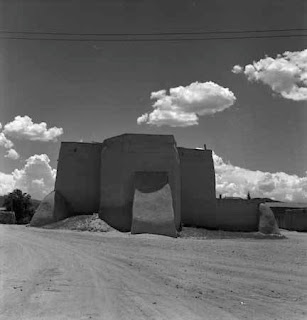 The only time to possibly take a photograph of the Church without the stones in place is in early June when they are removed for the work to be done during the re-mudding of the Church each year. The stones keep cars from driving into the perimeter and perhaps even keeping the mischevious skateboarders from using the buttresses as skating ramps. 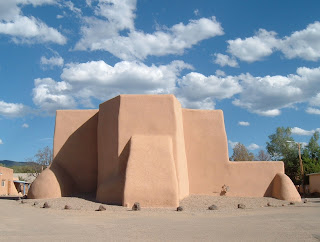 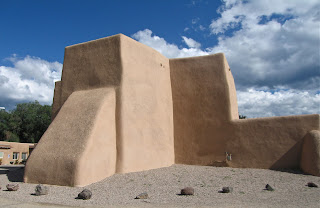 At an angle.
I am often asked where is that 'famous' Church? it makes me wonder for a moment what exactly is the person asking about, or do they even know why it's famous. It's usually difficult to not just ask if it's gone missing. All sorts of questions get asked, why did they build that shopping mall in the middle of the parking area, or how big a swimming pool is inside that building, believe me I've heard it all my 9 years here next to this beautiful building.
I've never been asked how tall is it, hmmmm....
Anyone who has taken an art history course by a competent professor would have seen an image of this Church from the back whether it be by O'Keeffe or by Ansel Adams. By the way can you pick out which of the photographs here are by Adams, I'll narrow it down for you by saying it's Black and White. 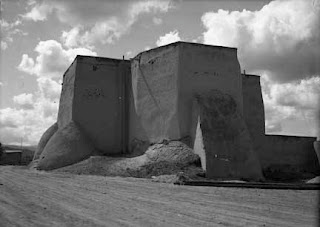 Note the stove pipes on the roof from the old wood stoves. 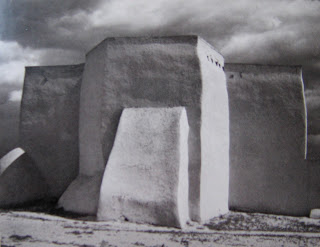 An overcast cloudy day with little contrast, Paul Strand perhaps one of the very few photographers to lovingly and truly document the Church in all it's glory. His portfolio of images of this Church in my opinion are the best ever taken. 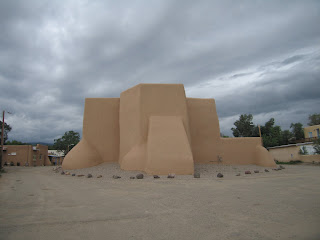 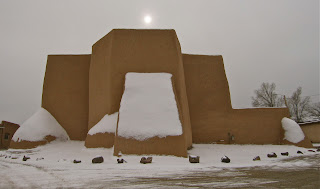 With fresh snow. My favorite time to take a photograph of the Church is with newly fallen snow. 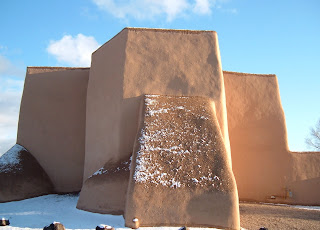 A bit of pixie dust.
As to taking a perfect photograph, you should come back often. 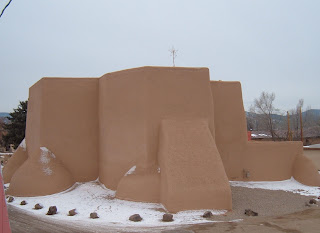 For a few years at Christmas season a star is placed at the top which is lit at night. 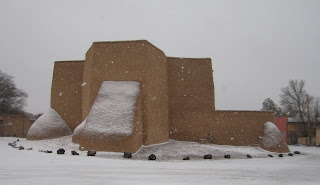 During a light snowfall this past year. 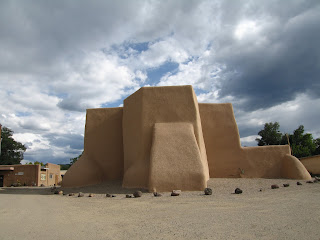 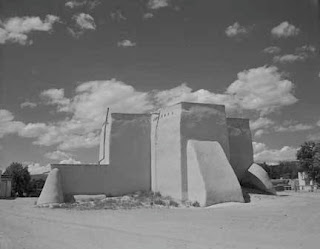 Once in a while a photographer prints this in reverse, maybe they just wanted to be a bit different. 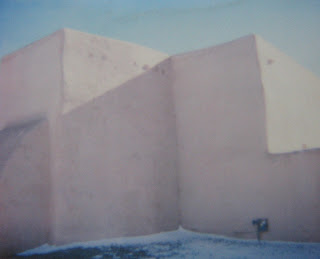 Any other significance to the Plaza?
a.      The Plaza was built on top of an old Native American village. We find broken pottery & animal bones buried here when digging in our gardens or when repairing walls which can be fragile. 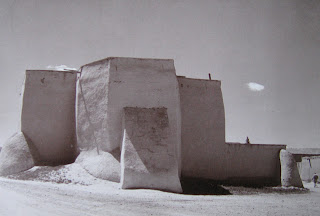 How old is the building that Two Graces Plaza Gallery occupies?
a.       Two Graces Plaza Gallery occupies one of the original buildings of Ranchos de Taos Plaza, the plaza was built when the Spanish settlers returned after the Pueblo Revolt, placing this building a little over 300 years old, the original oxblood soaked floor is in the backroom which we use as our office space..

Did Dennis Hopper really live nearby?
a.      Yes, Mr. Hopper renovated the El Cortez Movie Theatre just across the street, where he resided from 1990 until his passing in May 2010, he filmed some of the movie “Backtrack” with Jodie Foster there and here in the
St. Francis Church Plaza using many of his local friends as extras.
Out of respect for his family, PLEASE Do Not Ask Where Mr. Hopper has been buried.


What is going on across the way with that big building renovation?
a.      The Olde Martinez Hall is currently being renovated to include a dance hall complete with stage, a
restaurant with a brick oven, a café & bakery, the Taos Community is excited about the potential for this complex.
The photograph below is from the upstairs window of Martina's Hall, an incredible view.

Postscript: A couple years ago a photographer asked me if I would help them to temporarily removed the boulders, I thought this was rather incredulous, would you move parts of Stonehenge to get a better shot!

A couple recently came to Taos and noticed the Church on the way into town from Santa Fe, they came into the shop asking what we knew about this structure. The woman's Mom had made a painting of the back of the Church many years ago, and it was something she never understood what the painting was of, her mother never said, or the daughter never asked, (probably not wanting to hurt her Mom's feelings, asking "what's that?").

I rarely take photo studies of 'parts' of the Church, for me it's full on back and front once in a while.

Artists set up easels in the Plaza to make their own versions of this structure, everyone is welcome to do so. My suggestion is to take a photograph from the place you choose to set up, at the time of day when the light is just right to your eye. Use that photo to help you finish the painting later. You'd be surprised at how quickly the light and shadows change.
Posted by Two Graces Plaza Gallery 68 St. Francis Church Plaza at 4:24 PM